Saturday November 14, That was the year that was! 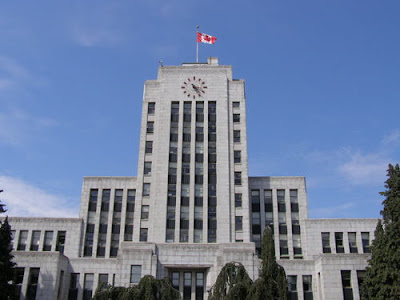 As someone who has always celebrated birthdays and anniversaries (even the anniversary of my former employer's receivership), I thought it was appropriate that we somehow mark the One Year Anniversary of the last Vancouver municipal election with an event.

I therefore put together with Gordon Price and Bob Ransford a draft program for a community forum which was sent out to a number of potential participants. The list included Mike Howell, who writes the 12th and Cambie column in the Courier, and who wrote the following piece. I should note that this was printed before many potential speakers had been confirmed, and a number of the people who were 'expected' will not be able to paticipate.

Election reflection As the first year anniversary of last year's civic vote approaches, a failed NPA candidate is organizing an event to look back at the election and talk about what has happened at city hall since then.

Michael Geller, who finished 1,525 votes out of a council seat, and NPA cohorts Gordon Price and Bob Ransford will host "That was the year that was: A look back at the year in Vancouver municipal politics and a look forward."

The Nov. 14 event is planned for the Wosk Centre for Dialogue (expected to be confirmed Wednesday) and will comprise three sessions.

Architect Gregory Henriquez, Kera McArthur of ThinkCity, Bernie Magnum of the Board of Trade and Joel Solomon, Mayor Gregor Robertson's financial backer and economic adviser, are expected to be among the panelists.

Topics include development, housing, transportation, the Burrard Bridge bike trial and the economy. Journalists are also expected to share their views in a media panel session.

"While some of the participants have past ties to the NPA, it is proposed that this not be a highly charged event," says the email dispatch from Geller. "Rather, the intention is to take a look at what has been happening and engage in substantive discussions on key issues to hopefully identify strategies and actions for the coming year."

I am pleased to advise that this event is now confirmed for the SFU Wosk Centre for Dialogue on Saturday November 14, from 8:30 to 12:30 . (Coffee and muffins from 8:00 am) Admission is on a first come, first served basis.

While speakers are still being finalized, the program will include opening comments by moderator Bob Ransford, a well respected communications consultant and regular contributor to the Vancouver Sun Westcoast Homes section.

The first panel will include a presentation by Gordon Price and myself, followed by a panel discussion on achievements in the areas of planning and development including housing the homeless, STIR rental housing, laneway housing, and other Council decisions over the past year.

A second panel will look at the fiscal considerations at City Hall, including the budget, and the recently announced Green Capital initiative, which as an aside, I personally support. Panelists will include representatives of ThinkCity which has been regularly polling Vancouver residents on their position and priorities on municipal funding; the Board of Trade; the Vancouver Economic Development Commission and the Green Capital initiative.

The final panel will let us hear from some of the city's key media personalities who have been following City Hall. The moderator will be Frances Bula, for many the undisputed dean of municipal affairs reporting in Vancouver. Other panelists will include Monte Paulson of The Tyee, Alex Tsakumis of 24 Hours, Mike Klassen or Daniel Fontaine from CityCaucus.com and one other yet to be confirmed media personality.

While more details will be forthcoming, I do hope that many people who follow the Vancouver municipal scene will mark their calendars and plan to attend, regardless of who they voted for on November 15, 2008!

Posted by michael geller at 8:32 AM

Although this is a great idea, I can't help but notice how stacked with NPA this event is:

Yourself, Price, Ransford, Tsakumis, Klassen and Fontaine (who fits into anti-Vision if not pro-NPA) vs. Joel Solomon. Maybe think about Jim Green and Jonathan Ross (if you're going to have Klassen on).