Vancouver Sun Westcoast Homes & Design: "Your space might be limited; your design vision shouldn't be" April 3, 2020 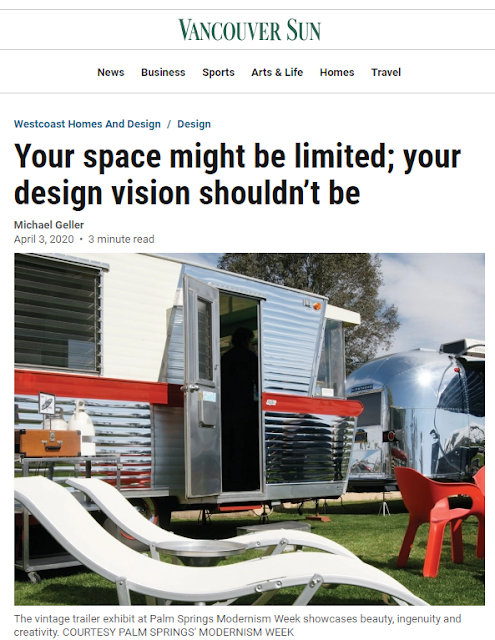 My second column for Westcoast Homes & Design was written for the 'Decoration Issue'. For many years I have been fascinated by the opportunities afforded by smaller homes and have often thought residential designers could learn from those who design boat and recreational vehicles interiors.
Since I happened to be attending Palm Spring's annual Modernism Week celebration of mid-century homes and design when it was time to write the column, I decided to focus on some of the  trailers on display at the Vintage Trailer exhibit. https://tickets.modernismweek.com/f/mw20/trailer
Unfortunately, there wasn't room to include my photos, so I have added a few here. 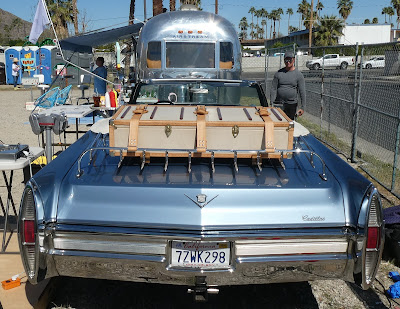 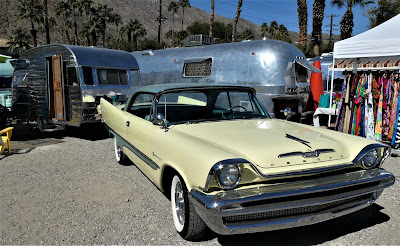 Below is my column. https://vancouversun.com/homes/westcoast-homes-and-design/design/your-space-might-be-limited-your-design-vision-shouldnt-be/
Would you like to live in a 280-square-foot home? Probably not. Would you like to live on a 40-foot yacht? Possibly yes. While we don’t usually measure a boat’s living area in square feet, a 40-foot boat equates to approximately 280 square feet. However, these boats are often surprisingly livable since the furniture is built in and spaces are designed to be flexible and multi-functional.

For example, the dining area is easily converted into a double bed. Seating areas and tables can also be transformed for sleeping.
Given the growing interest in laneway housing, tiny homes and generally smaller living spaces, residential designers can learn a great deal from studying boat interior layouts. They can also learn by examining the design of many recreational vehicles and trailers.
A few years ago, I was reminded of the delights, challenges and benefits of small-space living while spending a weekend in a 120-square-foot recreational vehicle. At eight by 15 feet, it included kitchen facilities, a small bathroom with shower, and living, dining and sleeping areas. There were numerous built-in cabinets and storage areas and it was beautifully decorated. 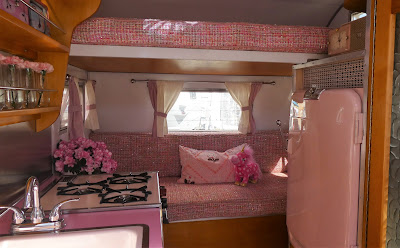 While it is one thing to live in a small space for a weekend, it is another to do so for an extended period. However, boats and RVs can offer important lessons when it comes to the design and decoration of smaller spaces.
This was very evident at Palm Springs’ recent Modernism Week, an annual 11-day event that celebrates mid-century modern design, architecture, art, furniture and fashion.The mission of Modernism Week is to foster an appreciation for mid-century architecture and design found throughout the greater Palm Springs area, with the hope that other cities will cherish and conserve their mid-century architecture.
The event includes double-decker bus and walking tours of iconic homes, many of which have been restored and furnished to appear exactly as they looked when first completed in the 1950s and ’60s.
One of my favourite Modernism Week events is the vintage trailer exhibition featuring a collection of trailers, campers and motor homes, most of which have been completely restored, equipped and decorated in a mid-century theme. You don’t have to be an RV aficionado to appreciate and enjoy this fascinating collection, which included a converted 1958 GMC Greyhound bus. 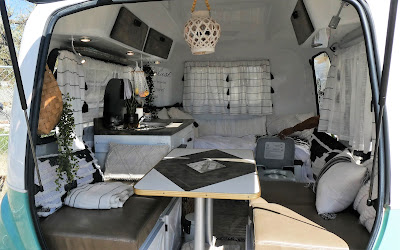 The beauty, ingenuity and creativity of the compact designs on display offered many ideas that should be incorporated in smaller home designs being built throughout British Columbia. This was particularly true for the clever kitchen and bathroom layouts, built-ins and storage spaces that too often are missing from new homes. 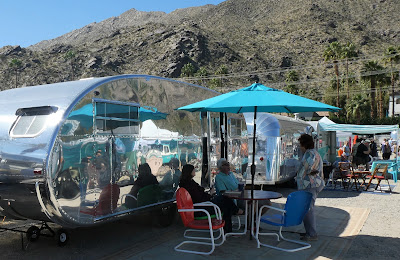 Owners were in attendance to show off their creations, some of which are lived in year-round. There were also displays of furnishings and artifacts from the 1950s and ’60s, some of which were for sale at surprisingly high prices. 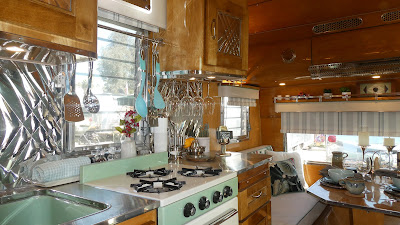 Every year, visitors can vote for their favourite exhibits in a variety of categories including best original, best restoration and People’s Choice. This year’s People’s Choice Award went to a gorgeous, fully restored and glistening 1959 Airstream Traveler. It featured varnished wood panelling and cabinetry, two-toned turquoise-and-white appliances, and a quilted stainless-steel backsplash.
As I walked through its interior, I could not help but compare it with the bland interiors of too many of today’s apartments.
As the price of housing increases, living spaces will continue to become smaller and smaller. However, by carefully studying the interior design and decoration of boats and recreational vehicles, we will discover that smaller need not be equated with less livable, especially when furniture and spaces are carefully designed and transformable.
Posted by Michael Geller at 9:00 AM 3 comments: 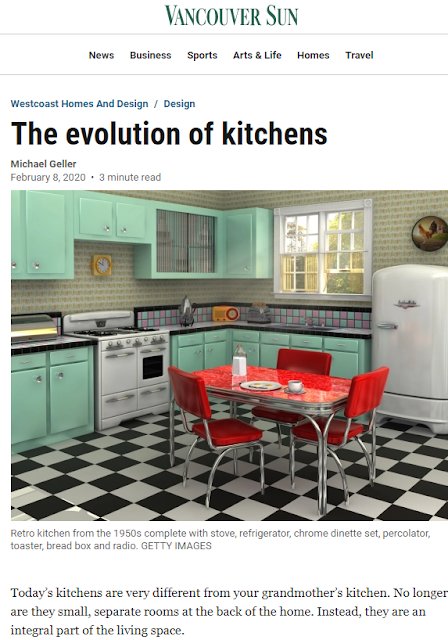 Late last year, I was surprised and flattered to be invited to write a regular column from an architectural perspective for the Vancouver Sun's Westcoast Homes & Design magazine.
https://vancouversun.com/category/homes/westcoast-homes-and-design/
The magazine is published bi-monthly and each issue is themed. My first column appeared in the
'Kitchen Issue' published in early February. Since today's kitchens are so very different from the kitchens of the past, I decided to review kitchen designs over the past century, including 'kitchens of the future' as envisioned over the years.
I suspect I enjoyed writing the column much more than those who read it. But here it is, along with some of the images you can find online. https://vancouversun.com/homes/westcoast-homes-and-design/design/the-evolution-of-kitchens/


Today’s kitchens are very different from your grandmother’s kitchen. No longer are they small, separate rooms at the back of the home. Instead, they are an integral part of the living space.That said, designs featuring heritage-style gas ovens, shaker cabinets, clamshell pulls and glass cabinets are oftentimes indistinguishable from those of the past.Let’s look at how kitchens have changed through the decades.
In the 1920s, gas ovens were common in most domestic kitchens. The electric oven arrived a decade later, as did the electric refrigerator, which replaced the icebox. In 1930, fewer than 10 per cent of households had a refrigerator. By 1960, nearly all homes had them.
The innovative 1926 “Frankfurt kitchen” was the first to introduce continuous built-in cupboards and cabinets. However, by the 1950s, “fitted kitchens” with laminate countertops were standard. Countertops were designed to accommodate bar stools and built-in eating nooks became popular. Pastel-coloured appliances were all the rage. 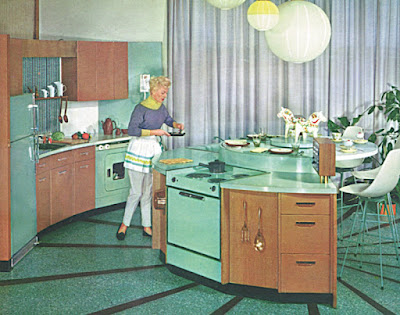 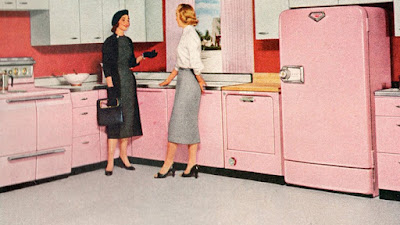 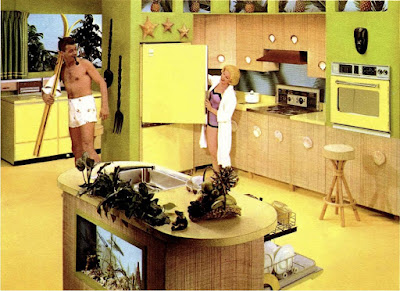 In the 1960s, wall ovens with separate built-in cooktops arrived, along with garburators. Although dishwashers first appeared in the 1950s, they did not become commonplace until the 1970s, when microwave ovens also became popular.
The 1980s brought the open kitchen. In subsequent years, kitchen designs became sleeker with concealed built-in appliances. Granite and quartz replaced Arborite and Formica, and stainless-steel appliances become a popular choice. 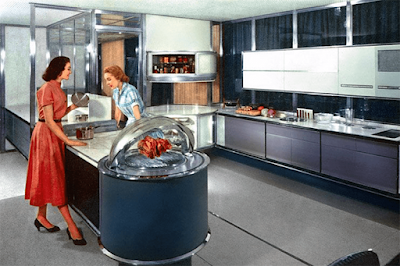 So, what can we expect in the future? Before answering, let’s look at how futuristic kitchen designs were envisioned in the past.  General Motors/Frigidaire’s 1957 “Kitchen of the Future” featured an “ultrasonic” dishwasher, an IBM electro-recipe file that activated an ingredient dispenser, a Thermopane domed oven, and a roto-storage system with dry, refrigerated and frozen sections.
In 1967, designers envisioned computerized kitchens where food was prepared and frozen, then quickly microwaved to order. Meals could be personalized so that each family member got what they wanted and needed with the right level of nutrition. 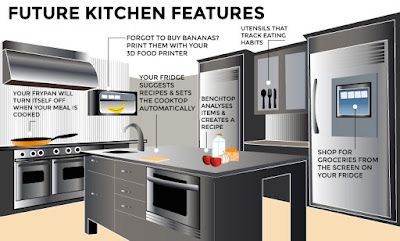 As we look to the future, it is worthwhile examining some of the ideas incorporated in IKEA’s 2025 kitchen, which was first revealed in 2015. It will be smaller, smarter and more sustainable. It will be highly integrated with the home’s other living spaces and offer multi-purpose food preparation areas that can also function as spaces for dining, work, and children’s play. 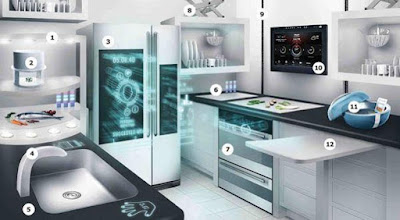 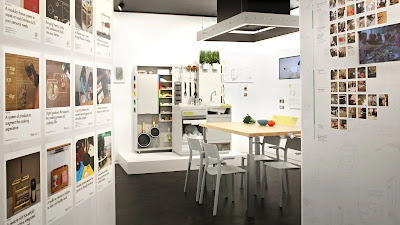 IKEA’s 2025 kitchen will increase efficiency and reduce food waste. Food storage will change. Instead of large refrigerators in which many items are often forgotten and wasted, food will be cooled in special containers that communicate with transmitters printed on the food’s packaging to regulate the temperature. Consequently, appliances won’t waste energy keeping food colder than necessary.
The IKEA kitchen presumes future residents will be charged for every pound of garbage generated and rewarded for recycling.Water conservation will be facilitated through special sink designs, and there will be new approaches to composting. Instead of dumping compost waste into an outdoor green bin, a device will extract water from discarded food and compress it into dry, odourless pucks, ready for municipal pickup.
Predictions from other designers include: in-home systems to harvest food waste into compost for the garden; built-in hydroponic gardens to grow food at home; and 3D printers that will print food.
Personal digital assistants like Google Home or Alexa will connect to appliances, and will tell you if you don’t have enough strawberries for your smoothie.
If you think this all sounds too fantastic, just head over to your local appliance store and look at the features offered by the latest refrigerators on display. You will quickly discover the future is already here.
Posted by Michael Geller at 8:21 AM No comments: