The following article appeared in the Whistler Pique, following my presentation to BC Land Summit:

Whistler compares well with many forward-thinking communities around the world, according to Michael Geller.
Published 2009-05-27 14:53:04

As the global community comes face to face with land-use issues and climate change, unique and inspiring ideas are beginning to blossom.

Not every idea is huge and there are many obstacles to making sustainable and livable environments a reality.

But little by little land use planners and others and working to try and make sustainable living a reality. A few of these ideas were the topic of a popular seminar at the B.C. Land Summit in Whistler last week which looked at what lesson could be taken from countries around the world and put in place in B.C.

Hosted by Simon Fraser University's Michael Geller the audience learned about Brazil's transportation system in Curitiba, South America's most sustainable city; why row housing should and is coming back; why there should be more public art; and why taxi service needs to be overhauled to allow for multiple passengers at the same time.

The presentation was based on a tour Geller did of 31 countries across four continents in 2007.

Of all the lessons that need to be taken to heart the most compelling concerns transportation said Geller.

"One of the real problems with public transit is that most of us think we are too good to use public transportation, especially buses," said Geller.

"We will consider using things like Skytrain. But I think if you can change the public perception of public transit then more people will use it."

Officials also need to re-think what public transportation is. Geller used the "buses" in Turkey as an example. There the buses are more like mini shuttles and while they have a route, they can deviate to take you to a designated spot.

This can work especially well in areas that are larger and have low density, like many of the communities in B.C.

In Curitiba, said Geller, the busses run like a light rail with people buying tickets on a platform before they board the transit. In some cases the bus is in a designated lane and in other cases it melds with traffic.

In Israel's Tel Aviv, if you get a cab from the airport the driver waits until it is full of passengers before leaving the terminal.

"The notion of someone going in a taxi by themselves from Tel Aviv to Jerusalem is unheard of, and I really think we need to think about sharing taxis as part of our culture," said Geller.

The battle to get more people to ride transit was dealt with in an interesting way in Curitiba. There the mayor of the city decided to deal with two issues at once: getting people on buses and disposing of recyclables and garbage.

It was decided to pay people in transit tickets to get rid of their garbage sustainably. But as an added bonus each transit ticket used also had a number on it, which entered the rider in a state lottery.

"This is the kind of creative thinking that we really need to start to introduce to all of our communities," said Geller.

Whistler, he said, compares well with many of the most forward thinking communities when it comes to sustainable planning.

The town is built around a pedestrian system encouraging people to leave their cars behind while shopping. It is at the forefront of sustainable practices and while some may complain that it is too uniform in it's buildings it maintains an overall look that is welcoming and attractive.

"I think Whistler is on par with a lot of these places because it has done a lot of things very well," said Geller after the presentation.

"One of the things it has done is it allows you to get around without a car as a pedestrian, so many of the portions of the town centre are pedestrian-oriented."

Looking good is also important, though the beauty can be in the eye of the beholder, said Geller.

In Albania, for example, he explained, the new mayor of the capital Tirana, an artist, wanted to do something to fix up the cities decrepit housing. There was no money for new construction but he could afford to get paint for everyone.

Currently the city's buildings are covered with the most amazing combinations of colours and patterns.

"Now there really is quite an interesting sense of pride developing in this the poorest country in Europe," said Geller.

In Singapore, officials have an annual competition amongst the residents of government-owned housing to see which complex is the cleanest. It is hugely successful.

Geller suggested that the same be done here in B.C. Housing complexes.

"I think you could give $1,000 to the winning household and still be ahead of the game in terms of your maintenance costs and also create greater sense of pride in communities," he said.

There are a myriad of ways to improve the livability of a city, town or region said Geller. But to make it happen it takes vision.

Geller is a Vancouver-based architect, planner, real estate consultant and property developer with four decades of experience in the public, private and institutional sectors.

He also serves on the Adjunct Faculty of SFU's Centre for Sustainable Community Development. 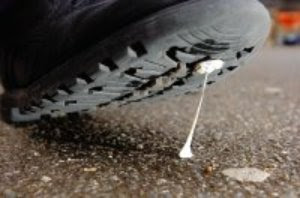 Following my recent post about discarded chewing gum and cigarette butts, I received a number of suggestions on how other places are dealing with the problem. In Croydon UK and other English cities, there is a 75 pound fine if someone throws there used chewing gum on the street. The program is called "chew this over". But teenagers are also being given pocket sized packets to put their discarded gum in-before them into special chewing gum bins dotted around the town centre.

The scheme is being spearheaded by Croydon's Business Improvement District which organizes gangs of cleaners to wash gum off the town's streets with power washing equipment.

Other cities are handing out special containers, which one can hang around their neck, with space for advertising, to hold used chewing gum until it can be discarded.

I think it is time we started to be creative and discourage people from throwing their gum on Vancouver's streets. Agree?
Posted by michael geller at 2:51 PM 1 comment: