I recently spent a few days in Montreal and came back with a number of observations and ideas that Vancouver might want to consider. Here are seven, in no particular order. 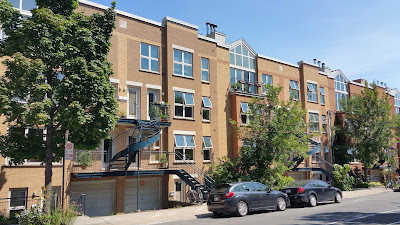 This small Montreal infill housing development offers affordable housing choices not found in Vancouver. Photo Michael Geller
1. Alternative forms of affordable housing
One of Montreal’s traditional housing forms is the maisonette, which offers one and two-level suites above a single level suite, with direct access from a winding outdoor staircase.
While Montreal snows more than Vancouver, I was surprised to discover this affordable housing form continues to be built, appealing to those who cannot afford a house or townhouse, or prefer not living in an apartment building.

In other Canadian cities, the stacked-townhouse is a variation on this housing form. While some stacked-townhouse developments are now being built in Vancouver, they need to be more common.
I also discovered small eight- to 12-unit infill developments around the city. They offer grade level townhouses with their own garages, and smaller suites above accessed from the street. Upper floor residents do not have off-street parking and must rely on street parking, car-share, or do without a car. As an increasing number of Vancouver residents no longer need to own a car, similar infill developments would fit well in Vancouver. 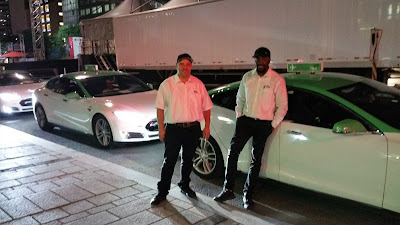 These Montreal taxi drivers drive Tesla cabs. Photo Michael Geller
2. Electric taxis
While Vancouver is rightly proud of its many hybrid taxis, I was surprised to discover one Montreal taxi operator offers a small fleet of Teslas. Now that’s one-upmanship. 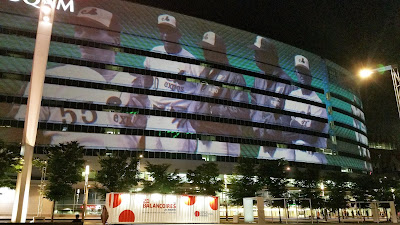 3. Illuminated murals
Last week, many Vancouverites were delighted by the first annual Vancouver Mural Festival, which took place in Mount Pleasant. Montreal has been organizing similar festivals since 2013. It also offers the annual winter Montreal en Lumiere, which illuminates murals on downtown buildings. Some continue year-round, and I was delighted to see illuminated murals transforming a grey-concrete structure at the University of Quebec. Many of Vancouver’s building facades could serve as nightly canvases.
4. A city of bikes
While Vancouver drivers complain about the number of bikes and bike lanes being built around our city, there seemed to be far more bicycles on Montreal’s downtown neighbourhood streets. Like Vancouver, the city has set up electronic monitors to count the number of cyclists using separated bike lanes.
While I am on the topic, I noticed that much-needed new bike lanes have been added along both sides of Southwest Marine Drive, between Granville Street and Dunbar. However, did the engineers really have to install sporadic concrete barricades and flimsy white poles? I think they look awful and question the need.
5. Slower and more respectful drivers
While Montrealers always had a reputation of disregarding traffic regulations, I was surprised to discover far more motorists driving at the posted speed limit compared to Vancouver. Drivers also tended to stay in the inside lane, except to pass, something Vancouver drivers rarely do. While others may not share my experience, at a time when ICBC rates are climbing due to an increased number of accidents, perhaps it is time for Vancouver motorists to obey speed limits, signalization, and driving in the proper lanes.
Alternatively, maybe it is time for the province to introduce mandatory driving tests every five or 10 years, before renewing drivers’ licenses. 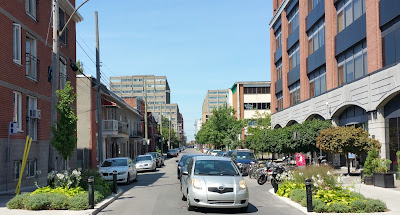 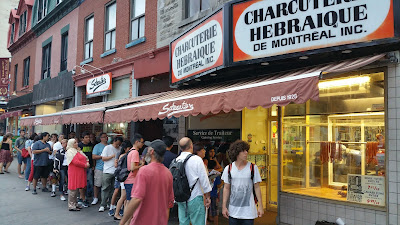 Vancouver could use at least one more Jewish deli like Montreal's famous Schwartz's. Photo Michael Geller
7. Jewish delicatessens
For many, myself included, no visit to Montreal is complete without a visit to Schwartz’s or one of the city’s other Jewish delicatessens for a bagel and lox or smoked beef sandwich. While we now have a branch of Montreal’s Dunns, as well as Ominitsky’s on Oak Street, and the recent pop-up Mensch Delicatessen on East Broadway (that serves a hearty pastrami sandwich), Vancouver desperately needs another traditional Jewish deli. After all, you don’t have to be Jewish to enjoy good Jewish deli.
While there are many things that Vancouver could teach Montreal, including how to better deter graffiti, hopefully some of these ideas will find a place in Vancouver in years to come.
michaelarthurgeller@gmail.com
- See more at: http://www.vancourier.com/opinion/seven-things-vancouver-should-copy-from-montreal-1.2332822#sthash.zO2UfNOH.dpuf
Posted by Michael Geller at 4:41 PM 2 comments:

Last week I treated myself to six days in Montreal. While there was a time when I visited the city two or three times a month,(during EXPO67 and while with CMHC) this was my first trip in 18 years when my daughter was studying at McGill. 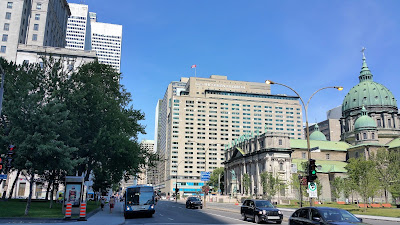 While much had changed, many areas seemed very much like the way they were when I was last there.

This trip was prompted by my first annual golf tournament of the Canadian Seniors Golf Association, an organization I was invited to join earlier in the year. You can learn more about the CSGA here: http://www.thecsga.ca/ The tournament was played at the Royal Montreal Golf Club, the oldest golf club in North America, and Beaconsfield Golf Club, which dates back to 1903. They were both beautiful courses with very impressive clubhouses. 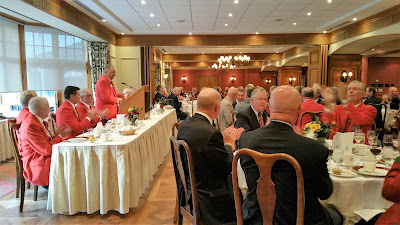 Prior to the tournament I spent a few days in the city. I stayed at what was once the Opus Hotel developed by my friend John Evans a number of years ago. Today it is the Hotel 10 and occupies a very good location at Sherbrooke and St. Laurent. It has a nice vibe and I can recommend it, although there is a night club below so you may want a quiet room facing the other direction.

I spent Saturday looking at old and new housing developments including Tour des Canadiens, an impressive and sophisticated new complex being developed by Canderel in concert with Cadillac Fairview and the Montreal Canadiens.
I can't help but think many of the city's traditional housing forms, including the maisonettes with their exterior staircases should be built in Vancouver.

There were a number of other sights around the city that could be transferred to Vancouver which I wrote about in this week's Vancouver Courier column. You can find it in a subsequent post. 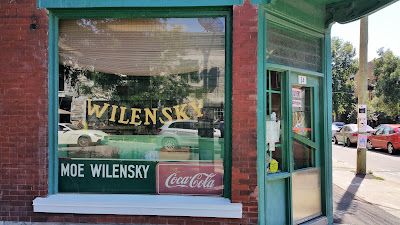 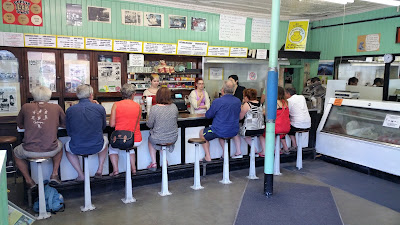 No visit to Montreal is complete without a trip to the Jewish delicatessens. While I was a bit disappointed with Wilensky's, made famous by Mordechai Richler in the Apprenticeship of Duddy Kravitz, I thoroughly enjoyed a meal at Schwartz's. Here are a few more images from around the city. 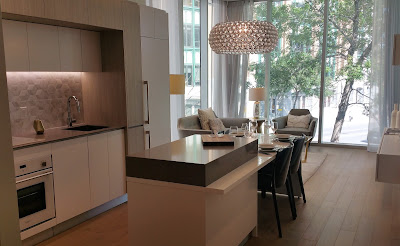 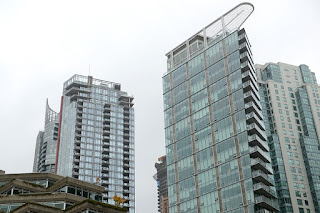 Hardly a day has gone by over the past two weeks when I haven’t been asked about the province’s rashly imposed 15 per cent tax on foreign buyers. Will it have an impact? Why was the tax not made retroactive, or at least somehow phased in? Will it make housing more affordable?

The answer to the first question is quite obvious. It has most definitely had a short-term impact. Many sales were cancelled, or are likely to be cancelled as a result of the tax. Lawyers are being asked to assist purchasers who are trying to get out of agreements, or assess the consequences of walking away from deposits. Put simply, it’s a mess for those directly affected.

As to why the tax wasn’t somehow phased in, one would have to ask those in the Premier’s office or inner circle. However, I find it hard to disagree with those who say the Premier saw her polling numbers sinking and wanted to be seen to be doing something significant. I also suspect no one around the Premier fully comprehended the unintended consequences of the tax.

Will the tax make housing more affordable? It will make some properties more affordable in the short term, but I question the long-term impacts, since they will depend on a number of other factors, some of which are described below.

But before considering these matters, let’s not forget Mayor Gregor Robertson’s vacant housing tax. It too will likely be fraught with unintended consequences and one can only hope that his advisors will caution him to do a better job than the Premier in introducing any new tax legislation.
Last week, I posted a comment on Facebook suggesting that a year from now we will have both the foreign buyers tax and the vacant dwelling tax without a significant change in overall housing affordability. To truly improve the long-term outlook, we need to both increase housing supply and dramatically improve municipal approval procedures.

Currently, it takes much too long to get zoning, development and building permits in the City of Vancouver and most other Metro municipalities. Even if you don’t like developers and house builders, you should take a closer look at the legitimacy of their complaints when it comes to project approval delays at city hall.

This issue was recently addressed in a report by the Fraser Institute, which looked at housing affordability in Toronto and Vancouver. It concluded that rather than simply focus on constraining demand, we need to look at the “long and uncertain approval timelines for building permits, as well as onerous fees and local opposition to new homes… which contribute to the housing supply’s inability to keep up with demand.”

Now again, many of you would expect the Fraser Institute to side with developers and home builders. But the reality is, while they may have to wait for permits, they are not the only ones suffering. Indeed, as one of my colleagues recently told me over dinner, the delays at city hall have made him a lot of money since they have stifled competition and allowed him to sell condos for much higher prices than anticipated.

In Vancouver, we have the added problem of Community Amenity Contributions (CACs), which are payments made to the city whenever land is rezoned. Since there are so few undeveloped multi-family sites in the city, rezoning is usually required, with all the angst that goes along with a zoning change.

One problem with CACs is that they are generally not pre-determined and negotiated on a case-by-case basis at the end of the approval process. While many are happy to see developers paying large sums of money to the city, trust me, the developer isn’t paying. The consumer is paying.
After I wrote an article critical of the current system of financing growth, a well-respected Vancouver appraiser called me up. “Michael, I’m surprised that you are speaking out on this. You know, and I know, that if you hire the right appraiser, you can beat the system.”

Until we reduce the uncertainty and unnecessary complexities in our approval system that severely restrict supply, housing in Vancouver will remain extremely unaffordable. The 15 per cent tax is not the answer.
michaelarthurgeller@gmail.com
@michaelgeller
Posted by Michael Geller at 4:26 PM 3 comments: