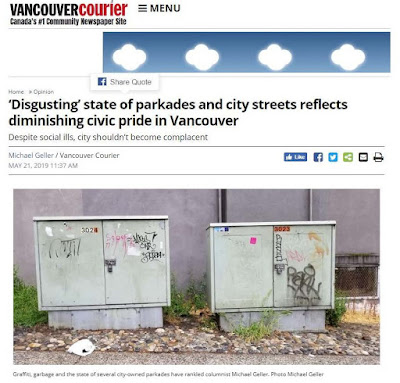 The fentanyl overdose crisis. Money laundering. Unfair evictions. Unaffordable housing. Inadequate public transit. Limited childcare. Loneliness.
These are just some of the issues facing Vancouver. However, this week’s column is not directly about any of them.
Instead, I want to revisit a topic I wrote about in March, namely, the filthy, disgusting condition of an EasyPark managed, city-owned parkade in Gastown.
While the column was critical of EasyPark, it also explored why so many downtown stairwells and back lanes have sadly become public toilets.
It proposed increased public toilets and improved property maintenance while we await more facilities.

Last week, I parked in EasyPark’s Lot 2 parkade at Cambie and Pender. This is the site of Vancouver's first hospital and, in 2018, was designated with a Vancouver Heritage Foundation plaque as part of the “Places That Matter” program.
Although I didn’t see the plaque, I did find a parkade in even worse condition than the Gastown parkade. The stench in the stairwell was not just unpleasant, it was sickening.To get this parkade cleaned up, I tweeted the following:

$5.50 an hour to park at filthy, urine soaked @EasyParkVan parking garage at Beatty & Pender. I will be writing to EasyPark president & Board of Directors to join me on tour of this & Gastown parkades. Maybe I should ask @globalnews @CBCVancouver @CTVVancouver
to join us.
Twitter Ads info and privacy
While EasyPark did not respond, Global TV emailed and offered to join me on a tour at 11 a.m. last Friday. I proposed that we meet at the stairwell I found so unpleasant, but the cameraman found one that was even more putrid and littered with discarded needles and other drug debris.
On Saturday, Global broadcast its story, which included interviews with parkade users, all of whom complained about the stench.     One young woman, who uses the facility every day, said she must hold her jacket over her nose every time she uses the stairs.
Hopefully, EasyPark's general manager will personally visit this parkade and arrange for the stairwells, one of which resembles a cesspool behind a reinforcing bar gate, to be thoroughly cleaned.
I also urge EasyPark directors, Vancouver facilities officials and politicians to visit the parkade, if only to see that I am not exaggerating the disgusting and unhealthy condition of this city-owned facility.
While EasyPark spokesperson Linda Bui apologized to Global TV for the “unsatisfactory experience the customer was subject to during their last visit,” noting a third party maintenance contractor provides onsite janitorial services six days a week, what is really needed is a long-term strategy to address the problems facing this and other parking garages.

The issue is not just the smell and unsightly appearance. It is also the crime that regularly occurs. Next to where the TV cameraman filmed his interviews, broken glass from yet another break-in was clearly visible.
I would like to offer EasyPark a few suggestions. Firstly, why not install portable toilets in these parkades? They would benefit both the homeless and others using the stairwells as toilets and car parkers. Surely it will be easier to clean a portable toilet than the stairwells.
Also, why not install video cameras and notices letting everyone know they’re being monitored?
Why not organize a neighbourhood watch program and invite volunteers to community clean-ups in return for food or parking vouchers and a barbecue?

However, my concern is not just these parkades. I am also troubled by the increasing amount of unwanted graffiti on electrical boxes and other structures around the city and garbage on the streets.
I’m worried about the increasing number of homeless people sleeping on sidewalks and dangerously wandering into traffic at busy intersections, begging for change.
Finally, I fear that, collectively, we are becoming too complacent about what is happening around our city. Too many Vancouverites appear to be losing their sense of civic pride.
I realize cleaning parkades and graffiti is not going to solve the serious problems listed at the top of this column. But that is no reason why we shouldn’t be making more of an effort to beautify our city. I hope some of you will join me in speaking out.

Posted by Michael Geller at 4:43 PM No comments:

Have you been thinking about buying a hybrid or electric car?
If so, you are not alone.

On May 1, a federal program took effect offering rebates to purchasers of nineelectric cars and 13 plug-in hybrids. Fully electric cars with starting prices of less than $45,000 are eligible for the full $5,000 rebate. Plug-in hybrids can get up to $2,500 off.
These are in addition to B.C. program rebates announced last year offering $6,000 for a hydrogen fuel-cell vehicle and up to $5,000 for a new battery electric or plug-in hybrid electric vehicle.
I first drove a hybrid vehicle in 2000. It was an early Prius brought over from Japan to accompany Severn Cullis-Suzuki and my niece and some friends on a bicycle ride across Canada, in a campaign for clean air called Powershift 2000.
After the Prius was introduced in Canada, I purchased one as a car-share vehicle for the burgeoning SFU UniverCity community.
This seemed appropriate since the car-share concept was developed by a part-time SFU student named Tracey Axelsson as a school project. She subsequently co-founded the Co-operative Auto Network in 1997.  Car-sharing has come a long way since then.
When I left the SFU Community Trust in 2007, I traded in a Lexus SUV requiring 20 litres per 100 km for a Prius requiring sixlitres per 100 km. A neighbour who owned a Porsche, Range Rover and Mercedes convertible called me a snob as I first drove by her house.
At the 2010 World Fair in Shanghai, a variety of electric cars were on display and in use. I decided then to one day buy an electric car.
In 2013,Tesla arrived in Vancouver. I booked a test-drive appointment and loved the car, but worried the company might go broke, until a year-end trip to California where many Teslas were on the road.

Returning to Vancouver, I ordered one for delivery in March 2014, just before expiry of a $5,000 government rebate program.
I have driven it ever since without any problems. My daughter continues to drive the 12-year old Prius. Neither vehicle requires much maintenance.
A key consideration with an electric car is how to charge it. As noted on the BC Hydro website, there are three basic approaches: Levels 1, 2 and DC fast charger.
Level 1 refers to the standard 120-volt outlet found in homes and businesses. Realistically, this is not a practical way to charge a car on a regular basis.
Level 2 power supply is the same as that provided for a stove or clothes dryer. Level 2 chargers can be installed in a garage by an electrician at a cost between $800 and $2,000.
The ongoing energy costs for electric cars vary but are often estimated at about $2 per 100 km.
The third type of charging is DC or direct current fast charging using 480-volt. Increasingly, these chargers are being installed in public facilities and commercial buildings. Charging time for most cars is significantly reduced. While some stations are free, others cost about three times as much as Level 1 and 2 charging.
Given the federal and provincial rebates, gasoline costs and environmental benefits, I highly recommend buying an electric or plug-in hybrid vehicle. However, a key consideration is whether it can be easily charged overnight.
While this is relatively easy for those living in single-family houses, it can be more difficult and complicated for those living in older rental or condominium apartments.
I cannot leave this topic without sharing a recent tweet from former city councillor and current chair of the David Suzuki Foundation Peter Ladner.
“If EVs are worth a $5k subsidy, why wouldn’t e-bikes and regular bikes get a subsidy? They produce far fewer emissions, promote greater health and are far more affordable. Why do we continue to pamper cars?”

If EVs are worth a $5k subsidy, why wouldn’t e-bikes and regular bikes get a subsidy? They produce far fewer emissions, promote greater health and are far more affordable. Why do we continue to pamper cars? #bcpoli

413 people are talking about this