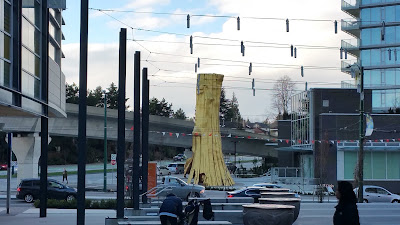 Recently, I questioned the choice of a golden hollow tree sculpture by Doug Coupland for a space at the corner of Cambie and Marine on Facebook which I first viewed from the plaza within the Marine Gateway development. While I subsequently read about it on the internet and can appreciate the provocation it puts forth, and realize it may look better from other angles from which you can see the balance of the installation, overall I found the piece 'unfortunate' in this setting. 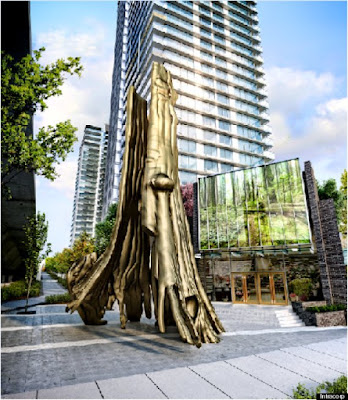 When I said so on Facebook, I discovered I was not alone in disliking the piece, although many others, especially art critics, thought it was wonderful, and strongly questioned my judgement about art.

This is not the only recent installation I don't like. I really am troubled by the recent salt piles next to the Olympic Village. Already the work is attracting graffiti, dead leaves, and other garbage. What were they thinking? 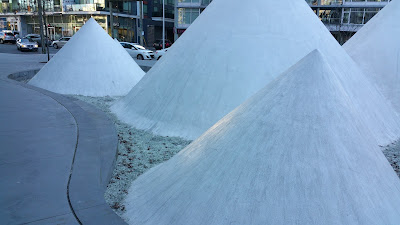 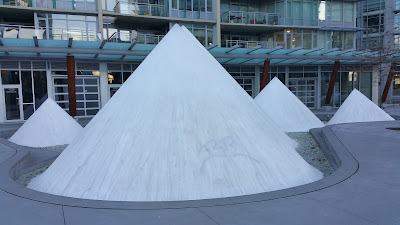 My colleague Norm Shearing, who also does not share my taste in art, asked me on Facebook whether there is any public art I do like. And so, on this rainy Sunday morning, I am happy to take a few minutes to post images of work I have come across in my travels, which I consider good public art. I welcome any comments. 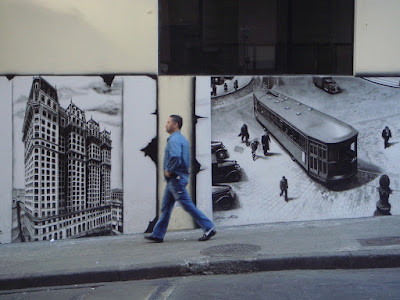 For 10 years I have argued Metro Vancouver's taxi system is broken. I was therefore delighted to have the opportunity to chat this morning with Stephen M Quinn and the manager of North Shore Taxi on CBC Early Edition about long-awaited changes to the taxi industry and introduction of Uber & other ride-sharing programs.
Bcearlyedition 20170309 26920
podcast.cbc.ca
Posted by Michael Geller at 4:33 PM No comments:

Podcast: Play in new window | Download | Embed
Subscribe: iTunes | Android | RSS | More
If you follow real estate news at all in Vancouver you’ve probably heard of this week’s guest – Michael Geller.
Michael is architect, planner, real estate consultant and property developer with four decades of experience in the public, private and institutional sectors. He serves on the Adjunct Faculty of the SFU Centre for Sustainable Community Development and writes a bi-weekly civic affairs column in the Vancouver Courier.
Michael Geller is an ideas machine – especially regarding housing affordability in Vancouver. He has presented numerous housing affordability ideas while lecturing at SFU including at a speech last week where he offered ideas on how to increase density without adding more towers, citing examples from many European cities.
Prior to his public lecture, he was interviewed on CBC and featured in Malcolm Perry’s “who’s-who” column in the Vancouver Sun.
Our talk with Michael was particularly timely, as he has had a busy couple of weeks in the public eye commentating on real estate policy changes and housing initiatives. His commentary on container houses was featured in The Georgia Straight.
His column in The Vancouver Courier this week discusses the City of Vancouver’s new proposal to retain character houses. I suggest you read the whole thing, but this quote sums up his opinion well, “If we are going to make more zoning changes in Vancouver’s single-family neighbourhoods, why aren’t we addressing both retention of character houses, but also construction of smaller duplexes and townhouses?”
With so many wonderful ideas, I’m sure Michael will be a guest on the show in the future, as well. If you would like to learn more about Michael Geller, visit his website, check out his blog and follow him on Twitter.
Hope you enjoy this episode of The Vancouver UnReal Estate Show.
If you have any questions about the show or guests you would like to see, email us at podcast@keithroy.com.
Keith Roy – Personal Real Estate Corporation – RE/MAX Select Realty
Posted by Michael Geller at 11:35 AM 2 comments: 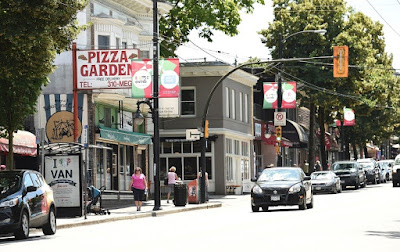