Over the past few weeks I have participated in a number of media interviews and discussions on the topic of housing affordability. Some have appeared in the newspaper, dealing with Homeowners Grants, deferring property taxes, and how to create affordable housing. Others have been on radio and TV.

Years from now, it might be interesting to see whether any of my observations were even close. So for the record here are links to some recent interviews:

For Robbie Burns Day: The Haggis Poem by Monty Python.

Another West Vancouver heritage house saved from the wrecking ball 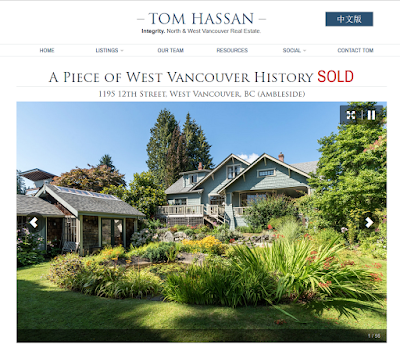 Now that construction on Vinson House Cottages www.vinsonhousecottages.com is underway, and about to go to market, I am pleased to report on another piece of West Vancouver's history.

The Major Rush house, built in 1923 was once situated on a two-acre parcel of land on Inglewood Ave. In subsequent years, the property was subdivided and today it sits on a 11,800+ sq.ft. lot at the corner of Jefferson and 12th Street. But it's a beautiful corner lot and I'm pleased to report that I have been able to purchase it with the intention of undertaking another heritage revitalization project/
I am now in the process of preparing plans that will conserve the house, add a garden suite below, and two cottages along the lane. Hopefully I'll have something to show the neighbourhood and District planners in the coming weeks.  But I do want to thank Mike Kemble, a former planner at the City of Vancouver, with whom I once worked on the planning of the Bayshore community, for apprising me of this property during the Public Hearing for the Vinson House.

I also want to thank Tom Hassan, a realtor at Royal LePage Sussex, http://www.tomhassan.com/ who appreciates the importance of saving West Vancouver's history, for showing me the property, and Elaine Biggan, the realtor who has worked with me over the past few years, for doing everything she could to encourage me to buy it!

I'll have much more to write about this shortly, but in the meanwhile, here is a link that describes this beautiful house and property. http://www.tomhassan.com/real-estate/1195-12th-street/

Posted by Michael Geller at 7:02 PM No comments:

I have been both amused, and disturbed, by homeowners’ responses to the 2017 B.C. property assessments. I am sure I am not alone.
I can’t help but wonder what those struggling to afford a one-bedroom apartment must be thinking when they read about homeowners complaining that their homes increased in value by hundreds of thousands of dollars last year.
Yes, some may be losing their homeowner grants. But when you stop and think about it, given the number of renters who can’t find an affordable home, why is the provincial government still offering $800 million in grants to 91 per cent of BC homeowners?
Many homeowners are concerned because they cannot afford to pay their property taxes. But they refuse to avail themselves of the Property Tax Deferral Program, which was created precisely to help people like them.
Which brings me to another complaint. Why does this program offer extremely low interest rate loans to anyone 55+, regardless of their financial situation? Surely the program should be means-tested, as it is in most other jurisdictions.
The property assessment notices raise some other issues.
Our property taxation system is based on the market value of a property, considering its location, size, zoning, and improvements. Other jurisdictions use different approaches.
In Vietnam, I was surprised to see many tall, skinny buildings, often in the middle of nowhere. I was told this was because property taxes were not based on value, but rather on the quality of a street and the width of the property. Since narrow properties required shorter roads and services, they were taxed less.
I think it is time for our governments to reconsider how they calculate property taxes.
I first thought about this 20 years ago when I owned a suburban house on a large lot and a Coal Harbour condominium apartment assessed at a similar value. My house, on the southern boundary of the city, required significantly longer roads, sewers and water pipes, compared to the downtown apartment.
There were also more children in my single-family neighbourhood compared to Coal Harbour.
However, I paid a similar amount of taxes on each property.
At a time when governments are encouraging us to live more sustainable lifestyles in multi-family housing, why aren’t there separate assessment classes and mill rates for single-family and multi-family properties?
Some of you will respond that most apartments are less valuable than houses, and consequently owners pay lower taxes. This is true.
However, owners of high-density apartments and low-density houses of the same value, pay the same taxes.
Why doesn’t our property tax system better reflect the cost of providing services, and reward apartment owners with lower taxes?
The dramatic increase in some single-family property assessments highlights another issue that needs to be addressed.
These properties increased in value because the neighbourhood Official Community Plan (OCP) or zoning was changed to allow multi-family development.
Some might say, “aren’t these people lucky?” Yes, they are, especially if they are ready to sell to a developer and move away.
However, if they want to remain in their house for the foreseeable future, they will be forced to pay much higher taxes, and many will not be eligible for the Tax Deferral Program.
As a planner who would like to see large swaths of single-family zoned land designated for multi-family development, I am more sympathetic to their plight.Why? I know that neighbourhood residents will forcefully oppose any density increases if they will result in higher taxes for those who don’t want to move. Consequently, politicians will be less likely to approve OCP and zoning changes.
One solution could be to modify the way properties are assessed and taxed. The goal would be to allow single-family properties designated multi-family in an OCP, or zoned for higher density, to continue to pay lower taxes until a development permit is taken out for a new development.
This would likely result in more land zoned for affordable, multi-family housing, without penalizing those owners who want to remain in their homes.
While this column looks at residential properties, there is another important taxation issue that needs further discussion, namely the unfair taxation of non-residential properties. But that is another topic for another day.
geller@sfu.ca
@michaelgeller
© 2017 Vancouver Courier
- See more at: http://www.vancourier.com/opinion/homeowner-s-grant-program-and-property-tax-system-due-for-overhaul-1.7978912#sthash.fwFSmoiR.73QTyg6E.dpuf
Posted by Michael Geller at 6:08 PM No comments:

Opinion: Outlook does not look good for Vancouver renters in 2017 - Vancouver Courier January 5, 2017 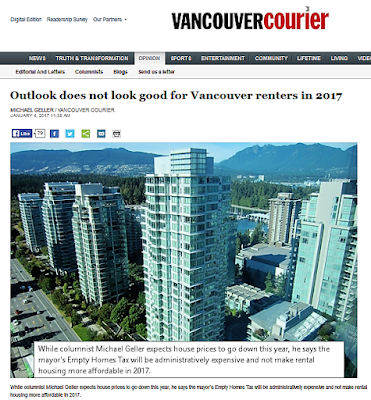 Will Vancouver’s housing become more affordable in 2017? This is the question on the minds of many, especially as we open our 2017 Property Assessments.
I have been reviewing forecasts from the B.C. Real Estate Association, economists, bankers and real estate experts. The consensus seems to be that given the rapid price escalation in recent years, and the province’s 15 per cent Foreign Buyers’ Tax, house prices will go down this year.
UBC economist Tom Davidoff is even predicting rents will also go down, in large part because of the mayor’s Empty Homes Tax.
I am not so sure.
While there’s no doubt single-family house prices have softened since the 15 per cent Foreign Buyers’ Tax was introduced, they are not likely to drop dramatically. Moreover, condominium prices have not gone down. In many cases, they have gone up since Aug. 2.
Given the difficulties obtaining approvals in most Vancouver neighbourhoods, there is limited supply coming onto the market. At the same time, demand from migration and downsizing baby-boomers is increasing. Furthermore, if air quality in China continues to get worse, expect more demand from Chinese buyers.
As for rental housing, by the end of 2017, I predict rental rates will rise even more than the 3.7 per cent allowed by provincial legislation.
While the mayor rightfully boasts Vancouver has witnessed construction of thousands of new rental units, rents for new apartments are higher than expected. Moreover, unlike Davidoff and city politicians, I do not expect the Empty Homes Tax to result in thousands of new rental units coming to market.
Let me explain why with a personal anecdote.
Last month, I received an email from the Floridian who purchased an apartment I once owned at Bayshore. He and his wife spend four to five months here during the summer and had just received the mayor’s letter about the proposed tax.
"Is your government nuts?’ he asked. “Do they really expect me to rent it out when I'm not here, or pay the tax?” adding it would be $40,000-plus a year.
He told me he once tried to rent the apartment, but it is very difficult to find someone who wanted it for precisely the period when he was not here, at an appropriate rent.
When he reviewed his situation with city officials, he was advised in writing that if apartments in his building can be rented for six months or more, the tax would apply, even if it was listed for rent.
When I tweeted out his predicament, I received some interesting responses. Many questioned why he should be unwilling to pay the tax if he could afford a $4-million-plus second home. Others pointed out the injustice of him having two homes when they didn't have even one.
To my mind, this is the essence of the tax. It just doesn't seem right to some people that others keep homes empty for whatever reason, when there is a shortage of rental housing.
One clever soul, who understood why my friend might not want to rent his beautiful, furnished waterfront home, asked why he didn't rent it to someone on the understanding they would keep it vacant. This way he would be complying with the requirement to rent it. City lawyers might have to go after the tenant.
I posted this on Twitter. "Attention lawyers. If someone rents an empty home to someone who keeps it vacant, would the tax penalty still apply?"
My tweet was shared around at least one downtown law firm where the matter was discussed. The consensus seemed to be that the city would have a hard time prosecuting either the owner or tenant, provided there was a lease in place.
More importantly, lawyers questioned the legality of this empty home tax in its entirety, and expected it to be challenged in court. They also believed those who wanted to get around it would easily find a way.
I suspect the Empty Homes Tax will result in some properties rented out, and others sold to owner-occupiers or investors who will rent them out.
But ultimately, it will be administratively expensive and not make rental housing more affordable in 2017.
geller@sfu.ca
@michaelgeller
© 2017 Vancouver Courier