How to make housing more affordable? One way might be to reduce the 6 key cost components.

If you are a regular visitor to Twitter, you will find many suggestions on how to make housing more affordable. Some believe you have to stop the foreign buyers from distorting prices. Others think the answer is to impose Empty Home Taxes, So-called Speculation Taxes, and Additional School Taxes on more expensive homes. I am one of many who think that it would be beneficial to reduce the amount of 'single-family' zoned land, and zone land for various types of multi-family homes to avoid lengthy and costly rezoning processes.

So how might we do this? Here are some suggestions: 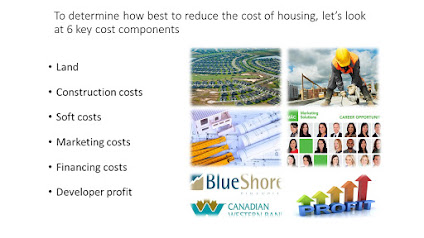 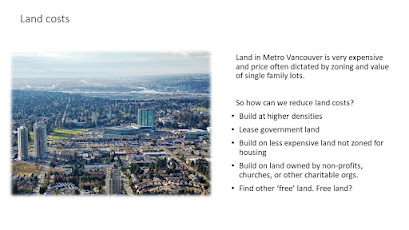 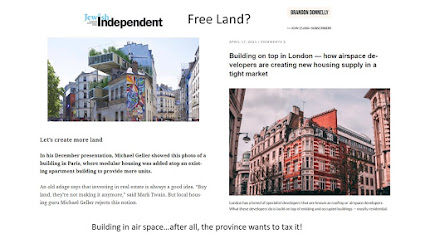 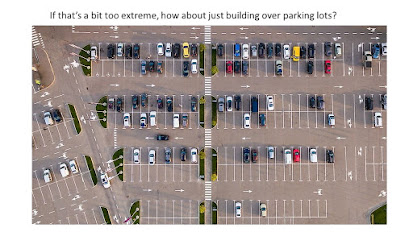 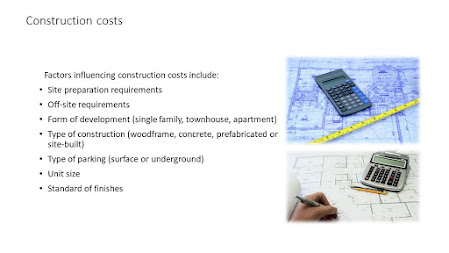 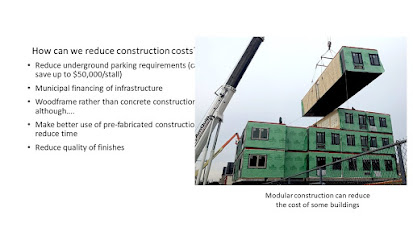 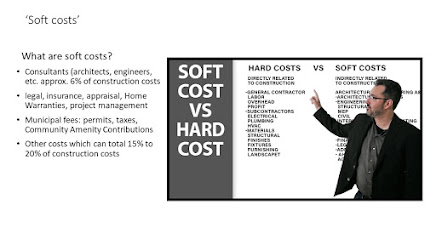 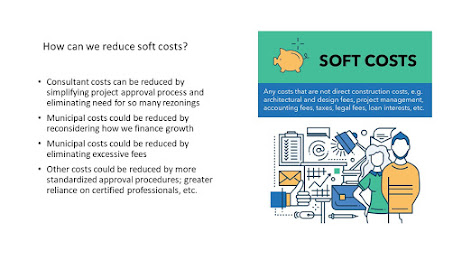 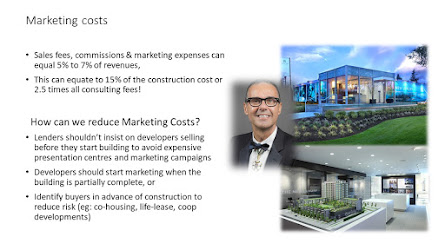 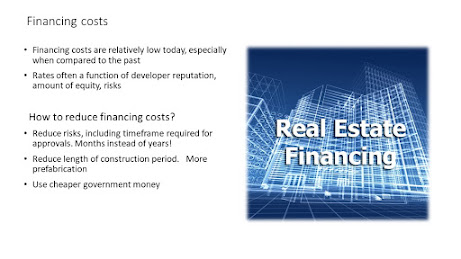 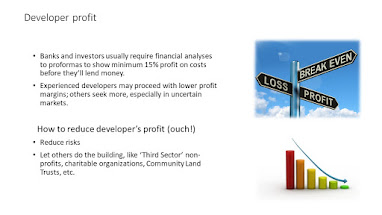 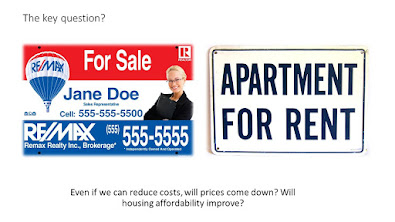 The answer is only if supply keeps up with demand. So how do we increase supply? That's another story for another day!

Speaking notes to Millennials: what I will tell those attending Board of Trade events today (From May 2016)

This morning, while searching for something else, I came across these notes from a talk I gave on a panel with Janet Austin and others at the Board of Trade five years ago to an audience of millennials and others hoping to get into the housing market. While I was wrong about Empty Home Taxes, I still stand by much, if not all of this advice, and have therefore decided to reprint it.

I particularly want to highlight the last point. Don't put off having a family because you don't have suitable accommodation. It's better to move to a less expensive place

and have a family!

Speaking notes to Millennials: what I will tell those attending Board of Trade events today

Speaking notes for Michael Geller
Development Industry perspective on housing affordability in Vancouver.
1.   Vancouver has always been an expensive place to live, but the current situation is unprecedented and now a crisis situation.
2.   Most of us know that Asian money is a very significant factor. But we also know that additional taxation is not THE answer, and could result in unintended consequences.
3.   Taxing empty houses and apartments sounds like a good idea; but will be complex and ineffective, and not likely to happen. But we’re watching what’s happening in Israel and other places.
4.   Nearly all of us think that increasing supply is a key to the solution. We know that where there is a lot of supply, prices have not risen as much. I own a condo in Burnaby that is not worth much more than I paid in 2006. It is not an isolated example.
5.   Supply solutions? Check out my SFU presentations. But they include new forms of housing: smaller houses on smaller lots; more duplexes and semi-detached; more townhouses including fee-simple; stacked townhouses; zero-lot line development; building on parking lots, along laneways, above institutional properties, above and beside industry; new forms of tenure; new attitudes
6.   Prices will not always keep going up.
I would like to conclude with some practical advice to those in attendance:

1. WHEN TO BUY? My first bit of advice was something told to me when I was still at university.
While hitchhiking to school, I was offered a ride by someone who warned that he had to make a few stops. I soon realized he was picking up rent cheques. He asked me where I lived and if I owned my property. I was 21 and told him of course not. He told me to buy as soon as possible, and not to worry about paying too much because in the long term, the price wouldn't matter.
2. If I couldn't afford a place of my own, buy one with one or more friends. Foolishly, I didn't take his advice until 11 years later.

3. WHERE TO BUY? In terms of where to buy, I suggested that the best investments are often in the worse part of town, OR where others are not buying.
I reflected on how many years ago I used to tell people to buy in the Downtown Eastside, other parts of East Vancouver, Maillardville (Coquitlam), New Westminster, and Squamish, I still regard these places as good investment areas in terms of potential upside.

4. WHAT TO BUY? NEW or USED In terms of buying new or used, I recommend buying older condominiums, rather than presale units.  While we don't talk about it a lot, in some parts of Metro, new units are like new cars; they depreciate when driven off the lot.
5. HOW TO PROTECT YOURSELF BUYING OLD? However, if you are buying an older unit, do not buy into a project that has not completed a depreciation report.  While some are being prepared by firms that are not qualified, and too lax, others may be overly conservative. I think this is fair comment; however, I stand by my advice. If buying into an older building, it is important to see if it has been 'rain-screened'.

6. WOOD OR CONCRETE? On whether to buy wood frame or concrete, as a rule I prefer concrete, noting the premium is often not as high as it should be. If buying into a wood frame building, it is best if it has roof overhangs. If not, it is likely to leak again
7. LITTLE THINGS TO LOOK FOR? . When looking at a unit, examine it carefully. Too often people buy, especially in this market, without checking to see if there are enough electrical outlets, closets, or furnishability.
Also check to see if there is a lazy-susan in kitchen corner cupboards. If not, don't buy. If the developer is trying to save a few dollars here, where else has he tried to save money?
7.RENTING? If you can't afford to buy, you may need to rent. As a general rule, while rents may seem high, they are often a good deal compared to buying. I have found that many new laneway houses rent for much less than I think they should, given all they have to offer.
Worry about things like RENTBERRY.COM
IT IS NOT A SECOND CLASS FORM OF HOUSING. SWITZERLAND, GERMANY….
8. CAR?  Finally, I told anyone who still hasn't bought real estate who has a car to sell it. When one compares the cost of operating a car over 10 years, with what the same money will do if invested in real estate, you're much better off without the car. Join a car-share instead.
9. ALTERNATIVE TENURE?  ‘Rent to Own’  Shared equity: Shared Appreciation Mortgages Co-housing, COOPS
10. Write a letter with your offer!
Don’t put off having a family because you can’t afford a home; it’s better to have an family and move!
POSTED BY MICHAEL GELLER AT 6:34 AM NO COMMENTS:

Posted by Michael Geller at 7:44 AM No comments:

Heading back to the USSR! A new competition to plan a new city in Sakhalin Region 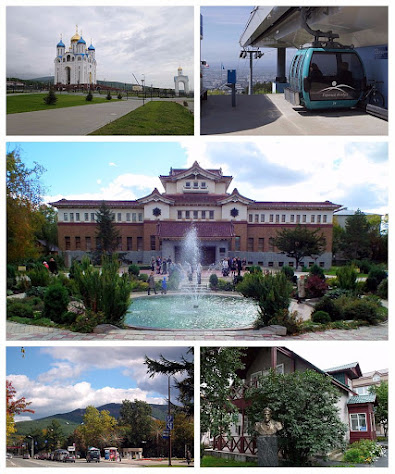 While it remains to be seen what impact Covid-19 will have on travel plans later this year, last week I accepted an invitation from Moscow's Center Agency to serve on another international planning competition jury. This one is for a new city in Russia's Sakhalin region, which includes a large island. Yes, an island. It's located in the 'Far East' close to Japan, although my initial travel investigations seem to indicate I might still have to fly through Moscow. Hopefully, I can get there through Tokyo. 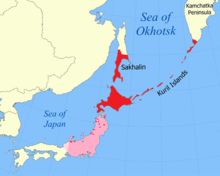 While planning competitions are quite rare these days in Canada, in Russia and European countries they are quite common. Not just for major public undertakings, like a new city, but also for new private residential and commercial developments. In the past, I have participated in various competitions including a new international financial centre in Moscow, and a major new development in Kazan. Here is a link to the latter.   https://www.centeragency.org/en/projects/45

Below is an excerpt from the latest invitation. (Watch this space for further details!)

We are pleased to announce the start of the Open International Competition for Architectural and Urban Development Concept of a New City in Sakhalin Region, Russia, which will take place on May 12th, 2021.
The competition is initiated by the Sakhalin Region Development Corporation and held under the auspices of the Government of Sakhalin Region.
Agency for Strategic Development "CENTER" is acting as the Organizing Committee of the Competition.
The purpose of the competition is selection of the most favourable architectural and urban development concept of a new city in Sakhalin Region that will fulfill the scenario for territorial development based on the potential and strategic opportunities of the area.
On behalf of the Organizing Committee it is our distinct pleasure to invite you to join the Competition as Member of the Expert Council.
The core responsibility of the International Member of the Expert Council is to introduce the best international practices to the members of the Council and to supervise the finalists at the second stage of the Competition. Taking into account your experience and expertise we'd be delighted if you could accept our invitation.
The two-stage competition will take place from May 12th, 2021, to October 26th, 2021:
Two Expert Council Meetings are scheduled within the timeline:
The Expert Council is expected to perform the following duties:
Among the participants of the competition are companies engaged in urban development and planning, public space development, architecture and design, which have been operating in the Russian Federation and capable of bringing to their team professionals in economics, finances and content programming.
The Expert council will include the top management of the Sakhalin Region Development Corporation, Sakhalin Region's state officials, Russian and international experts on architecture and urban planning and members of the International Society of City and Regional Planners (ISOCARP). 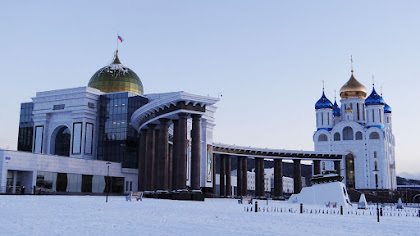 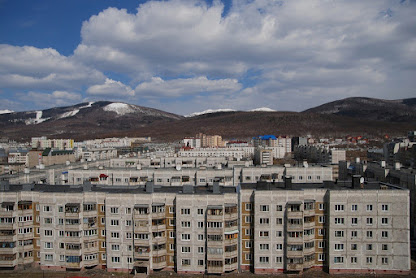 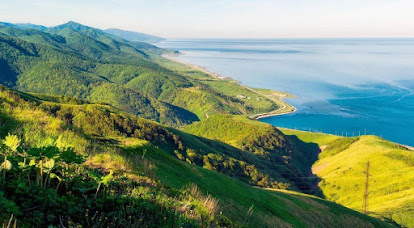