Apologies to anyone who actually reads my posts, but I'm here in Palm Springs for Modernism Week and while I have seen a lot of wonderful buildings and neighbourhoods, and the Palm Springs Follies which was a most enjoyable event, I just don't seem to have had time to document the trip.

But I will soon!

Lessons from Los Angeles From The Vancouver Sun Saturday February 8, 2014

Vancouver has taken design inspiration from the California city, but there’s more we could learn

By Michael Geller, Special to The Sun February 7, 2014 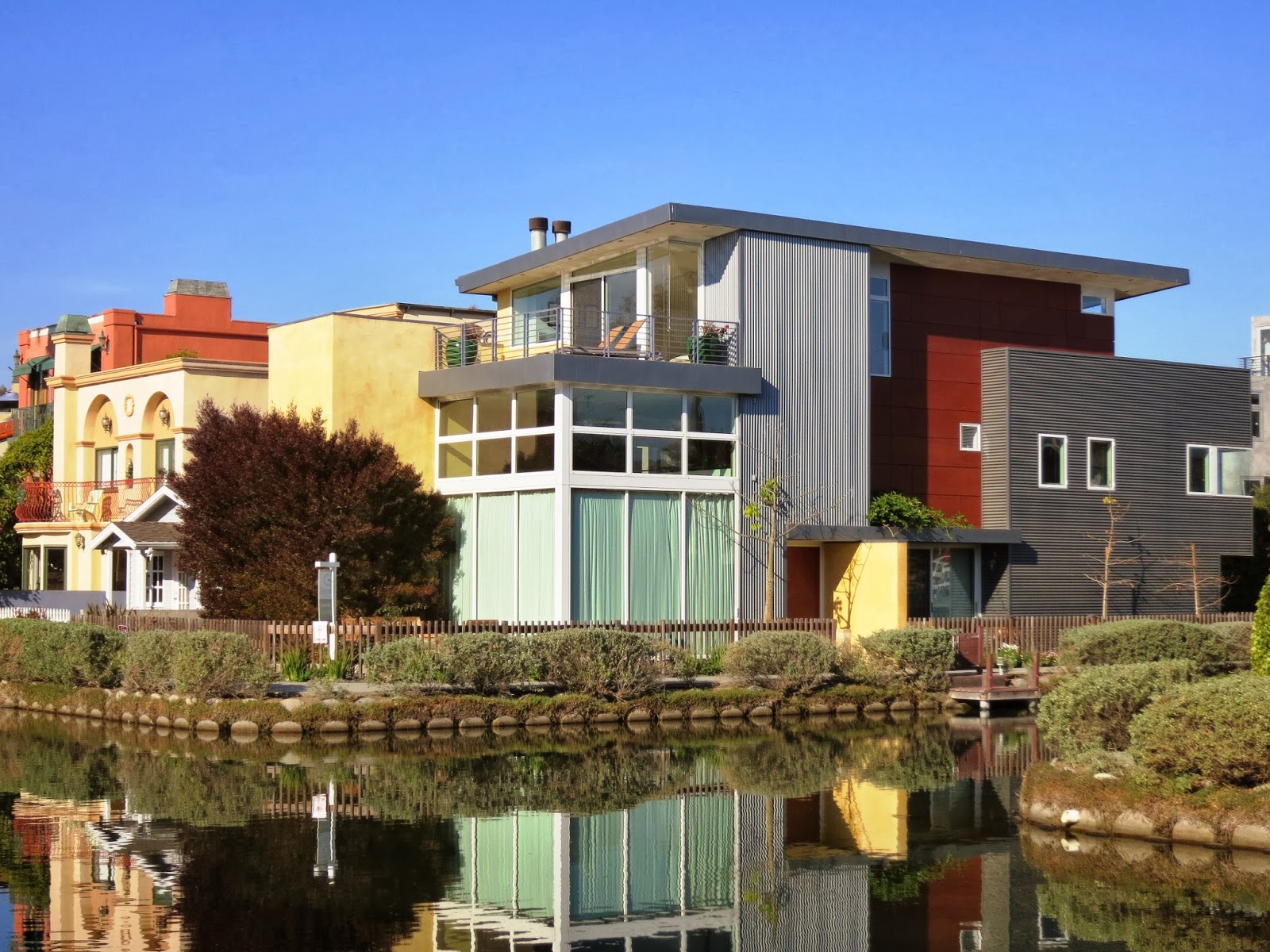 Photo of the Venice, California canals that inspired the Lagoons, a False Creek condominium development at the entrance to Granville Island.

I first visited Los Angeles in 1970 as a young architectural student on a cross-America CMHC travelling scholarship tour. In L.A., we visited houses by famous architects and waterfront communities dotted along the Pacific Coast Highway. I remember being impressed with the palm trees, the leisure-oriented lifestyle, and the expansive spaghetti-like freeway system.

In the subsequent four decades, like many Vancouver architects and developers, I repeatedly returned to L.A. and neighbouring communities for design and real estate inspiration. Vancouver’s description as Hollywood North can often apply as much to real estate as it does to the movies.
The Lagoons, a False Creek condominium development at the entrance to Granville Island, was the result of one such trip. Its California-inspired layouts included bedrooms accessed directly from the living areas and “open planning.” While common today, this was a design innovation in the mid-1980s condominiums.

The 92 townhouses, stacked townhouses and apartments were sited around two man-made water bodies, edged with semitropical landscaping, natural fountains and patios. Unfortunately, like many California-inspired projects built in Vancouver in the 1980s and 1990s, it suffered water penetration problems, which had to be addressed. However, it remains one of False Creek’s most sought-after low-rise developments.

A subsequent trip in 1989 influenced the planning of the Bayshore community in Coal Harbour. A year earlier, Japan’s Aoki Corp. had purchased the worldwide Westin Hotel chain. When Aoki’s president visited Vancouver and discovered a large parking lot on one of North America’s most magnificent waterfront sites, he decided then and there to transform it into a world-class community.
A visit to the exclusive Marina City Club in Marina del Rey inspired the concept of a “waterfront residential resort” incorporating extensive amenities, water features and lush landscaping. When the homes first went on sale in 1994, Bayshore was marketed as a community where residents could watch their boats in the marina and sip gin and tonics around the pool. Like Howard Hughes, one of the hotel’s most famous guests, they, too, could enjoy California living in Vancouver.

Recently, I returned to Los Angeles County to see how it had changed over the last decade. While many Angelinos continue to enjoy a leisure-oriented lifestyle, and the freeway system continues to dominate the region, there were a number of surprises.

Despite the pervasive signs of affluence, I was shocked to learn there are 57,735 homeless people in Los Angeles County according to the most recent count by HUD, the U.S. federal housing agency. This is an astonishing 23 per cent increase over last year. Only New York has a higher homeless population. Vancouver’s homeless problems pale in comparison.

I was pleasantly surprised by the transformation of the downtown. It used to be said that when it came to downtown L.A., like Gertrude Stein’s statement about Oakland, “there was no there there.” It was a place to work, but not a place to be.

However, since the early 2000s, downtown L.A. has undergone many changes. New zoning regulations have encouraged conversion of under-utilized buildings into loft-style apartments, and density bonuses have been granted for projects that include affordable housing.
The result is some striking highrise office and hotel buildings and considerable new housing. There are also new shops and restaurants, along with new parks and public transit initiatives. As an L.A. Times story put it, L.A. is moving toward a New York-style downtown. Or, as we might say, a Vancouver-style downtown.

While we tend to think of Los Angeles County as “motordom,” many people rely on transit to get around. Metro Rail consists of six lines, including two subway lines and four light rail lines, some of which use the downtown’s historic Union Station. To see how the system might expand in the future, watch the new movie Her and see Joaquin Phoenix ride an elevated train, dance through a busy subway station and emerge at the Pacific Ocean.

Another project of potential interest to Vancouverites is the proposed new downtown streetcar. Following an extensive planning and feasibility study that determined a cost of $125 million for the four-mile (6.4 km) route, a campaign was carried out to encourage benefiting commercial and residential property owners to partly fund the system. This arrangement was overwhelmingly approved by voters in 2012. However, subsequent studies have revealed that the cost may be as much as $300 million, putting the project funding in some doubt.

While staying in Beverly Hills, I discovered it was often easier to get a bus than a taxi. Service along Wilshire Boulevard was particularly good.

Travelling along Wilshire Boulevard, I was also impressed with many of the elegant apartments. With their carefully manicured gardens, they reminded me of older apartment buildings built along West Vancouver’s waterfront, near Stanley Park and around Kerrisdale Village. Unfortunately, too many of today’s new highrise buildings in and around Metro are at such high densities, they no longer exude the same character. Hopefully, as more people consider a move to a larger apartment, there will be more neighbourhoods planned to accommodate lower-density, elegant and beautifully landscaped highrise buildings.

Finally, Vancouver could take a lesson from L.A. when it comes to pedestrian streets. Yes, pedestrian streets! Anyone who has recently been to Santa Monica will have experienced its extensive Third Street Promenade. I was surprised to discover a pedestrian street directly off famous Rodeo Drive. While its newness and faux European facades reminded me a bit of the Krasnaya Polyana resort development just being completed in Sochi, it, too, is a delightful place to stroll.

Michael Geller is a Vancouver architect, planner, real estate consultant and property developer, and also serves on the adjunct faculty of SFU’s Centre for Sustainable Community Development. His blog can be found at www.gellersworldtravel.blogspot.com and he can be reached at geller@sfu.ca
© Copyright (c) The Vancouver Sun

Posted by Michael Geller at 7:12 PM No comments: