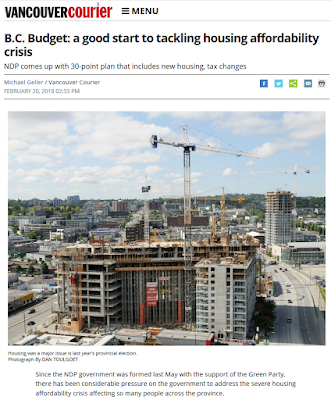 Budget 2018: How the budget addressed expectations.
Since the NDP government was formed last May with the support of the Green Party, there has been considerable pressure on the government to address the severe housing affordability crisis affecting so many people across the province.
The premier and housing minister have repeatedly told us that housing is their number one priority, and to wait for the 2018 budget to hear their comprehensive strategy to address both housing demand and supply.
Today, Carole James rose in the house to present the budget. While it addresses a broad range of issues, it did indeed focus on housing affordability with a 30-point plan.
No doubt many will say it did not go far enough. However, in my opinion, the budget does offer a broad range of specific actions and intentions, which could help improve housing affordability over time, provided there is a better balance between demand and supply.
The following compares what was announced today with past promises and expectations.
Managing demand: BC residents have been demanding higher taxes for foreign buyers, higher speculation taxes, and a more widespread application of an Empty Home Tax like that put in place by the City of Vancouver.
They also demanded greater transparency when it comes to who buys, owns and sells property, so that applicable taxes can be charged and collected.
The government did not disappoint. Today’s budget includes the following measures:
·
Taxing speculators: To crack down on speculators, the government will introduce an annual speculation tax, starting in B.C.'s urban areas, to tax foreign and domestic purchases. The tax will apply to property owners who don't pay income tax in BC, including those who leave units vacant. This tax appears similar to the highly publicized proposal by UBC and SFU academics.
·
Increasing the Foreign Buyers Tax: To curb demand, (and generate revenues), the government is increasing the Additional Property Transfer Tax (also known as the Foreign Buyers’ Tax), from 15% to 20%. Currently this tax only applies in Metro Vancouver. However, it will be extended to the Fraser Valley, Nanaimo, and Capital and Central Okanagan Regional Districts.
·         Taking Action to End Hidden Ownership: To counter tax fraud, the government is changing tax laws to verify the information provided on Property Transfer Tax and Income Tax forms.

·         Moving to Stop Tax Evasion in Pre-sale Condo Assignments: To collect capital gains tax payable on pre-sale assignments, the government proposes to pass legislation requiring developers to collect and report comprehensive information about those assigning pre-sale agreements. The government will also coordinate its audit and enforcement system with the federal government.

·         Strengthening Auditing and Enforcement Powers To address concerns about the source of funds flowing into real estate markets, the government will require additional information on beneficial ownership on the Property Transfer Tax form. It will also establish a registry of beneficial ownership in B.C. that will be publicly available and shared with law enforcement and tax auditors.

Increasing supply: During the election campaign, the NDP promised to build 114,000 affordable, rental, non-profit, co-op and regular housing units over 10 years. However, since forming government in July, it has not provided details on how this would be accomplished.  Today’s budget contains a myriad of funding measures to increase supply, especially for those in greatest need. They include recommitting to the delivery of 114,000 affordable homes over the next 10 years through partnerships. The total cost is estimated between six and seven billion dollars.

·        34,000 units in 3 years: The province will build almost 34,000 of the 114,000 units over the next three years, including units for mixed-income social housing, new beds for students at colleges and universities, and units dedicated for people who are homeless.

·         14,000 Rental Units for the Missing Middle: Of the total number of units, the province is investing $378 million over three years in rental housing to improve housing choices for middle income seniors and families.

·         Building 2,500 new Supportive Homes for People Struggling with Homelessness: Within this total, the province is promising an additional 2,500 new homes with 24/7 support for people who are homeless or at risk of homelessness. This is in addition to the funding of 1,300 modular homes previously announced.

·              Funds will also be available to assist non-profits with the renovation of existing projects.

A new HousingHub office at BC Housing will foster partnerships between governments, non-profits, and the private sector to build the 114,000 homes over the next ten years.

Increased affordability for renters: During the election campaign, the NDP promised renters a $400 a year grant which would somewhat mirror the grant provided to homeowners. The budget does not include any specific reference to this grant.

However, it is noteworthy that during the Minister of Finance’s presentation to media in lock-up, she said that the government would review “an interesting idea” to improve the fairness of the Homeowner Grant program to provide support for renters. As some Courier readers may recall, I have long suggested this program be ended or means tested, by making the grant a taxable benefit.
The budget does include enhanced assistance for low income renters under two programs:
Broader use of Hotel Room Tax: Since affordable housing is a major challenge to attract workers in many communities that rely on the tourism sector, the government will give local governments the flexibility to use their hotel room tax revenue to build housing.
Some of the other measures set out in the 30-point plan include:
As someone who participated in the consultation program leading up to today, this budget addresses many of the concerns that have repeatedly been expressed. However, as the Minister of Finance noted, it has taken a long time to reach the affordability crisis we are in today.
Given the severity of the problem, it is going to take a long time before we will see any significant improvement in the level of housing affordability in the Lower Mainland. However, this budget is a good start, especially for those in greatest need.
Twitter @michaelgeller
Posted by Michael Geller at 4:43 PM 1 comment:

It's Budget Day Part 1: What can we expect to address housing affordability? Vancouver Courier February 20, 2018

This morning, I was pleased to represent The Vancouver Courier at the local Budget 2018 lock-up, during which Vancouver media were given an advance copy of all the budget materials and the opportunity to seek answers from government officials. Before heading off, I decided to review some of the promises and expectations from the past 8 month, so that I might compare them with what was announced. Here is the first piece written before setting off. 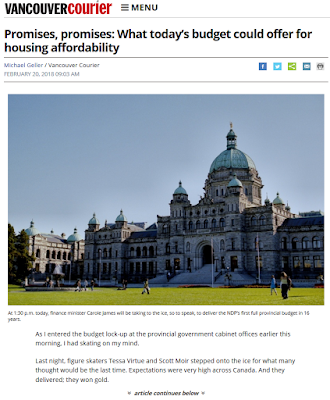 Promises, promises. Reflections on what today’s budget might offer in terms of housing affordability.
As I entered the Budget Lock-up at the provincial government cabinet offices earlier this morning, I had skating on my mind.
Last night, figure skaters Tessa Virtue and Scott Moir stepped onto the ice for what many thought would be the last time. Expectations were very high across Canada. And they delivered; they won gold.
At 1:30 pm today, Finance Minister Carole James will be taking to the ice, so to speak, to deliver the NDP’s first full budget in 16 years. Expectations are also incredibly high across the province, especially from those seeking more affordable housing and childcare. Will she deliver? Will she bring the gold?
Since the NDP government was formed last May with the support of the Green Party, there has been considerable pressure for them to do a lot to address the rampant housing unaffordability affecting the lives of many people across the province.
During the same time, the premier and housing minister Selina Robinson have told us repeatedly that housing is their number one priority, and we should wait for this budget to hear their comprehensive strategy to address both housing demand and supply.
So, what can we expect?
Managing demand: BC residents want higher taxes for foreign buyers, or even a ban on foreign buyers; higher speculation taxes; and more widespread application of an Empty Home Tax, like that in place in Vancouver.
During and since the election, the government has made promises to stem the unbridled speculation in the market. It says it will keep the 15 per cent foreign buyers tax but add a two per cent property tax surcharge on the assessed home values of property owners who do not pay tax in Canada on global incomes. It is estimated that this two per cent absentee speculators’ tax would generate $200 million annually for a housing affordability fund.
The government has also promised to put an end to ‘Bare Trustee’ legal structures, which allow wealthy individuals to avoid property purchase tax, and potentially other taxes when they buy and sell real estate; and more transparency over the beneficial ownership of properties through trusts, numbered companies, and family members.
Increasing supply: On the supply side, during the election campaign, the NDP promised to build 114,000 affordable, rental, non-profit, co-op and regular housing units over 10 years. However, since forming a government in July, it has yet to provide details on how this would be accomplished.
Many, especially those in the housing industry, have been calling upon the provincial government to get into the sandbox with municipalities and put in place measures to fast-track the tens of thousands of housing units held up in the approval system. Others have been urging the government to require higher density housing around transit nodes, as a condition of any provincial funding for transit improvements.
Increased affordability for renters: During the election campaign, the NDP promised renters a $400 a year grant which would be somewhat equal to grants received by homeowners of properties worth $1.65 million or less. While the government has been somewhat quiet on this, especially since the Green Party rightly questions why grants should be paid to wealthy renters, others are eagerly awaiting confirmation that this promise will finally be implemented.
Protection of equity: At the same time as the government is being urged to make housing more affordable, it is also being asked not to do anything that might wipe out the equity that many new homebuyers have invested in their homes. It’s a tough balancing act.
The mini-budget: In a mini-budget last September the government pledged $291 million for 2000 modular housing units for the homeless, something which pleased me since nine years earlier, I did a study for the Liberal provincial government on how temporary modular units could provide fast and relatively cost-effective homes.
The province also pledged $208 million over four years to build 1700 apartments for renters, seniors, and the disabled, and those with mental health issues.
But will there be something in this budget for ordinary ‘middle-class’ British Columbians, including nurses and school teachers who earn relatively good salaries, but are still struggling to find affordable housing near where they work, especially in more expensive municipalities?
The Speech from the Throne: Last week’s throne speech set out the government’s general intentions but included few specifics. It promised to crack down on tax fraud, tax evasion and money laundering which is believed to also be impacting BC’s real estate market.
The speech also promised stronger protections for renters and owners of manufactured homes and more money for affordable housing, “including social housing, student housing, seniors housing, Indigenous housing and affordable rentals for middle-income families.”
So, it is within this context that many of us will await details of the budget, especially in terms of addressing affordability. While media will hear the budget measures during a lock up this morning, British Columbians will start hearing the details at 1:30 this afternoon.
I cannot wait to see how many of these promises will be kept, and whether the government has truly created a comprehensive strategy to address both the demand and supply factors affecting affordability. Stay tuned.

Posted by Michael Geller at 4:35 PM No comments: