A Tribute to Dr.Peter Oberlander 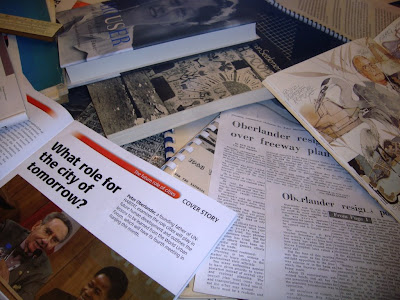 Yesterday I was honoured to be invited to serve as the Master of Ceremonies for an 'evening of tribute' to Dr. Peter Oberlander who passed away last December at the age of 86. Peter was a remarkable man, and I decided to write this post in the hope that it will inspire others to achieve as much as he did over his career. And what a career!

Peter Oberlander was an architect, planner, educator, politician, author, public servant, Citizenship Court judge, and much, much more. He operated on the local, national, and international stages...whether stopping an expressway or serving as Chair of the School Board in Vancouver , creating Canada's intergovernmental policy on cities and urban affairs, or organizing the World Urban Forum with the United Nations.

I first met Peter in 1972 when I was a junior architect/planner with Central Mortgage and Housing Corporation, and he was Secretary (Deputy Minister) of the recently formed Ministry of State for Urban Affairs. He had already graduated in architecture from McGill, earned a masters and doctorate from Harvard in planning, practiced architecture and planning, and started Canada's first planning school at UBC. David Crinion offered me my government job. Peter was offered his by Trudeau! 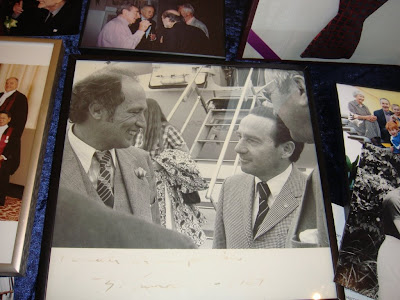 Our paths crossed many times over subsequent years at Granville Island/False Creek, Harbourfront Toronto, the World Urban Forum 3, at meetings of Lambda Alpha International, and so many more venues.

I also got to know two of his family members; Cornelia, the world renowned landscape architect, and his daughter Judy, who has to be one of the most decent, caring people in the world. As the Director of the SFU City Program, she helped create one of the best urban education programs in Western Canada. 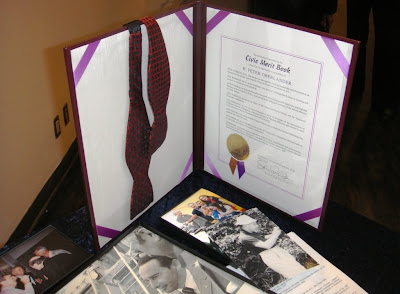 At the Tribute, people talked about Peter's role in helping to establish the first regional planning board in the Lower Mainland, the accomplishments of the UBC Planning School, his architectural and planning achievements all over the world, and his tireless efforts on behalf of the public. He received many honours for his accomplishments, including being named a Freeman of the City at the last meeting of the outgoing Vancouver City Council. It was one of the few unanimous votes!

I particularly admired the fact that Peter kept working well into his eighties without any thought of retirement. But my favourite Oberlander story...the day he told me, with a tear in his eye, that he had just been appointed a Citizenship Court judge. The reason it was so special was that 56 years earlier, it had been a real challenge for him, an Austrian Jew, to be allowed to enter into Canada.

He was a remarkable fellow, and I was proud to be able to play a small part in his evening of tribute. 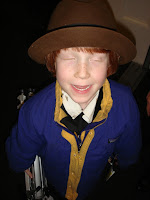 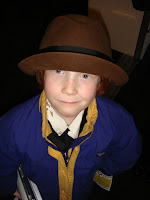 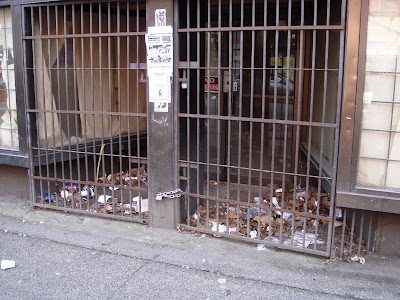 Recently, a lot of media attention has been given to the question of how to end homelessness and address the problems in Vancouver's Downtown Eastside. In an excellent series of articles in the Vancouver Province, called 'Operation Phoenix' (http://www.theprovince.com/news/operation-phoenix/more-top-stories.html) a number of people, myself included, offered thoughts on what needs to be done. I was particularly interested in the answer offered by former city councillor Jim Green when asked to name two actions to drastically improve the housing situation in the DTES.

"It's very simple. The first is to build affordable housing. The second is to employ local low-income residents in the construction trades."

I wish it was so simple! From my observations over the past 18 months, I have come to realize that the problem is really quite complex. Yes, we must build more affordable housing, and yes, we must help people find jobs. But given the level of drug addiction and mental illness amongst those in the community, and the general urban fabric, much more needs to be done.

For one thing, we need to come up with a means to coordinate all of the different organizations and various levels of government that are active in the area, spending millions of dollars every week. I personally favour a form of 'Community Development Corporation or Trust' that could bring together the key players in a concerted effort to work together. Sadly, I do not believe this is happening at the moment.

I would also like to see a demographic shift within the neighbourhood. I am not arguing in favour of a complete 'gentrification' that would replace the existing lower income residents. However, I do want to see a broadening of the socio-economic profile, with more middle income renters and homeowners, and new businesses moving into the community.

I would also like to see the area 'cleaned up'. Now I realize that this is a very politically incorrect thing to say. However, by starting to remove litter, power washing facades and replacing awnings, painting storefronts and generally improving the appearance of the neighbourhood, I believe this would provide the employment suggested by Green, and hopefully offer local residents a greater sense of pride. It might also alter the attitudes of many of us from outside the neighbourhood, who are often disgusted with what we see now.

Some have suggested that even if we did undertake a 'spring cleaning', it would not take long for the area to return to its current condition. To address this concern, I would propose an 'adopt a block' program, whereby community organizations and neighbourhood residents would work together to keep their block tidy. They might even decide to plant some flowers.

With its stock of heritage buildings, and proximity to the downtown, this could be a truly wonderful neighbourhood. Yes, I have been convinced it should remain a predominantly low income community; but it needs a broader income mix to become more a more 'normal' and sustainable neighbourhood. I believe the opening of the Woodwards development is going to be a positive step towards this end. But there will need to be a lot more market housing, retail development and institutional uses to make this happen. And a good spring cleaning could be a good start! 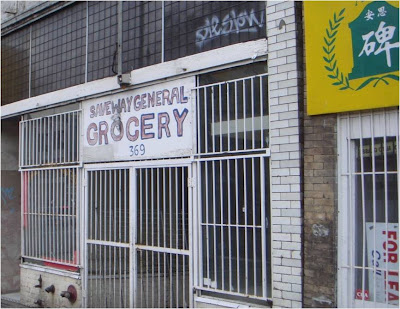 Now I'm off to UBC to listen to Gary Mason, Jim Green and others at a Globe and Mail/BCTV sponsored panel to hear what they propose as the solutions.

Does the world really need another blogger? Probably not.! However... 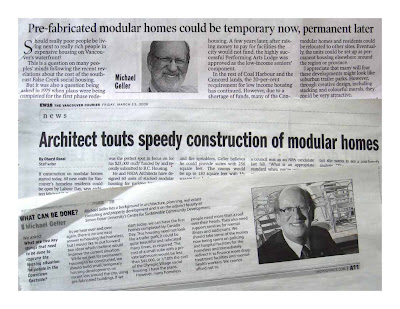 However, although I am no longer on my world travels, and not running for any political office, I want to share with a small group of readers some of the ideas and projects with which I am involved. And given the events of today, I thought this might be a good time to re-start this blog.

Over the past little while, like many people of my age, I have completely changed how I obtain and share information. While I still have an electronic subscription to the Canwest publications, I don't spend a lot of time reading the major newspapers. Instead, I get my news from blogs...most notably Frances Bula's daily musings, and the CityCaucus.com entries.

I think the new media are best described in Clay Shirky's book 'Here Comes Everybody'. It offers a very thoughtful account of how communication is changing in the digital world.

So what happened today? My morning was spent at a Board Meeting of the Urban Development Institute that was attended by Premier Gordon Campbell. He described our current situation with a very good analogy...we are all in a small boat paddling feverishly, to avoid going over a giant waterfall. And if we go over, it will take a long time to get back up on top. I think this is true.

While many of us who have been around for a while can understand this, unfortunately, far too many voters are too young to remember what happened when we last had NDP governments. While I personally liked both Mike Harcourt and Glen Clark, and am sure Carole James is a very nice person, I don't want to see the NDP put in charge of our economy during these very fragile times. 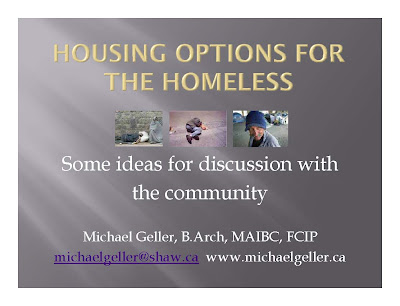 Following the meeting, and a very inspirational luncheon address by Campbell, I set off for the Downtown Eastside, where I spoke to a community meeting in the Carnegie Centre. I had been invited to discuss my proposal to create temporary housing with relocatable factory produced modules. While I found the setting heartbreaking, with many homeless people coming up to the microphone to speak, I was very impressed with the respectful, and generally positive response.

Most of those opposed are concerned that if this housing is built, it will defer or maybe even replace permanent social housing. I understand this concern, but still think it is better to have additional housing in place, while we wait for permanent facilities. Time will tell if the province is prepared to support the demonstration project. 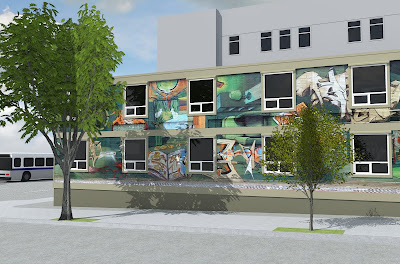 Now I'm off to another homelessness discussion...this time at the Public Library.
Posted by michael geller at 6:16 PM 1 comment: