My daughter Georgia, now a full-fledged oncologist at the BC Cancer Agency in Victoria, is joining many other caring people in the 9th Annual ride to Conquer Cancer August 26th and 27th. I know that she's too busy to solicit necessary donations and doesn't need anything more to worry about, so I am posting her message in the hope that some visitors to this blog will donate to this most worthwhile cause.

Please Support My Ride
Hello everyone,

Working as an oncologist at the BC Cancer Agency, I get to see some of the amazing improvements we have made in cancer care and yet how much more we still need to discover. I would really appreciate you supporting me for the Ride to Conquer Cancer to raise money for research and better outcomes.
Happy riding!
Georgia

You can find more details and a donation form at http://www.conquercancer.ca/site/TR/Ride/Vancouver2017?px=4292924&pg=personal&fr_id=1593

Posted by Michael Geller at 8:47 AM 2 comments: 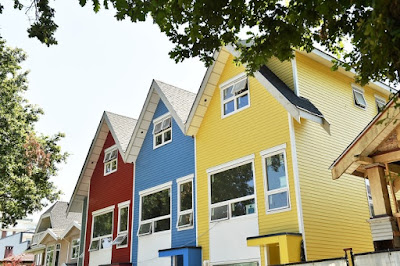 According to columnist Michael Geller, unless there is a dramatic reduction in the time it takes to obtain development approvals, especially for purpose-built rental projects, and “missing middle” forms of housing such as row houses and stacked townhouses, Vancouver’s housing affordability will be no better than it is today. Photo Dan Toulgoet

I woke up Monday morning facing a dilemma. What should be the topic for this week’s Courier column?
Related 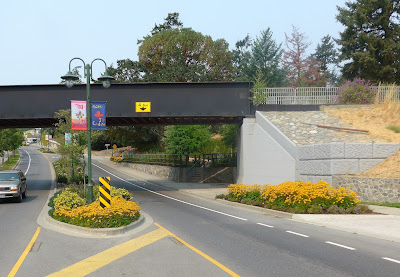 Should I write about my recent trip to Victoria where my wife could not help but compare the beautiful planting along street medians and boulevards with the overgrown weeds at the south end of the Burrard Bridge? 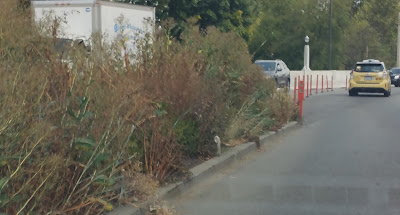 “Why can’t we plant flowers along streets like this?” she asked. “Surely the city can afford it.”
I told her that I didn’t think it was just a question of money, but rather one of attitude. While we want to be the greenest city in the world, many at City Hall regard planting flowers as frivolous and contrary to the principles of sustainability.
Another topic idea was to follow up on two recent columns.
Taxation issues related to laneway houses shocked many homeowners who had built laneway houses without any thought to income tax consequences.
In another column, I asked, “When is big too big when it comes to towers?” and alleged the height of taller buildings is often the result of financial considerations rather than good planning principles also attracted considerable attention.
The story referenced a Global News story in which Vancouver’s chief planner Gil Kelley acknowledged that to secure rental and affordable housing, there need to be trade-offs, often in the form of higher density.
Kelley went on to say that in Vancouver there are still limits set under a plan and “it’s not cowboy style negotiations. To earn the maximum height allowed under the plan the developer needs to provide a substantial amount of affordable housing and community benefits.”
While I have found Kelley to be a very genuine and sincere guy, I would suggest he spend time with Metro Vancouver real estate department officials where project-by-project “let’s make a deal” negotiations are the modus operandi.
Since housing affordability is so topical, I also considered revisiting my August 2016 Courier column about increasing supply and improving building permit times to make housing more affordable.
The Foreign Buyers Tax had just been introduced and the Empty Home Tax was coming.
I wrote then that a year from now we will have both the Foreign Buyers Tax and the Vacant Dwelling Tax “without a significant change in overall housing affordability.”  Sadly, this prediction has come true. In fact, housing costs are even higher than I anticipated a year ago.
At the time, I wrote “to truly improve the long-term outlook, we need to both increase housing supply and dramatically improve municipal approval procedures. Until we reduce the uncertainty and unnecessary complexities in our approval system that severely restrict supply, housing in Vancouver will remain extremely unaffordable. The 15 per cent tax is not the answer.”
This issue had also been addressed in a Fraser Institute report that looked at housing affordability in Toronto and Vancouver.
It too concluded that “rather than simply focus on constraining demand, we need to look at the long and uncertain approval timelines for building permits, as well as onerous fees and local opposition to new homes… which contribute to the housing supply’s inability to keep up with demand.”
A year later, the City of Vancouver is talking a lot about improving the development and building permit approval system. In March, senior officials made a presentation to Council in which they proposed various initiatives, including a program akin to the Nexus Lane.
However, since then, the city has proposed a “housing reset” offering a dramatic increase in the supply of affordable housing and new initiatives to encourage retention of character houses in single family neighbourhoods.
These will place even greater demands on staff time. So, I will say it again.


Unless there is a dramatic reduction in the time it takes to obtain development approvals a year from now, especially for purpose-built rental projects, and “missing middle” forms of housing such as row houses and stacked townhouses, Vancouver’s housing affordability will be no better than it is today.
Now you know the topic for my latest Courier column.
@michaelgeller
geller@sfu.ca
© 2017 Vancouver Courier
Posted by Michael Geller at 8:15 AM 2 comments:

Opinion: When is big too big when it comes to towers? Vancouver Courier August 1, 2017 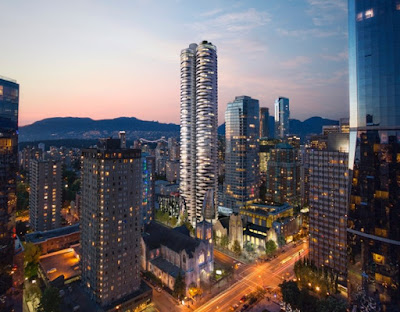 Someone once asked, “When you are sitting in the bathtub with the hot water running, how do you know when to shout?”
Related
This quotation came to mind last week when Vancouver city council approved a rezoning application at Nelson and Burrard.
The development includes 331 market strata units in a 57-storey tower, 61 units of social housing, seismic upgrades and restoration of a church, and expanded facilities and program space for the church and surrounding community. It will be the third tallest tower in the city, for the time being.
The development is a partnership between the First Baptist Church of Vancouver and Westbank Project Corp — a company I greatly admire for working with top notch architects and a commitment to design excellence. This architecturally striking tower, intended to resemble a pair of organ pipes, was designed by the late Bing Thom.
When a CBC reporter asked me what I thought of the design, I told her I thought it was very innovative and would appeal to those wanting to see more variety in Vancouver architecture.  But I agreed with those who thought it was too big for the site and neighbourhood context.
She said she was surprised by my response. But she shouldn’t have been.
While I have often sought approvals for taller and higher density developments, in recent years I have become increasingly concerned with the size of some new Vancouver developments. In my opinion, they are simply too big.
However, city staff and politicians justify higher densities and heights noting the developments offer promises of greater housing affordability, community amenities and sustainability.
In supporting this development, Mayor Gregor Robertson repeatedly told reporters it would provide much needed social housing units at a time when federal and provincial subsidies were not available. He is correct.
While council rightly rejected Chinatown’s 105 Keefer St. development, other developments have been approved at greater heights and densities than many planners considered appropriate since they offered public amenities, housing affordability and Community Amenity Contributions (CACs).
They include the Independent at Kingsway and Broadway, and 508 Helmcken, which, at a floor space ratio (FSR) of 17.4, is approximately 10 times the density of a typical Kerrisdale highrise. These buildings are now under construction and time will tell if my concerns were valid.
The famous American architect Louis Sullivan once said that building form should follow function. In the case of these projects, form follows finance.
I acknowledge that there are architects, planners and developers who disagree with my concerns. They question whether it really matters if a building is 30 storeys, 40 storeys or 50 storeys. What matters more to them is how the building is designed at the street level. They believe FSR is a blunt instrument that should not be used to assess the likely success of a design.
I understand and appreciate this point of view. However, it was not that long ago that six FSR was as high as the city would allow for residential development. Today double-digit FSR residential projects, like the Burrard and Nelson development, are becoming commonplace.
The debate over when is big too big reminds me of a radio interview with the late Arthur Erickson many years ago. In describing his design philosophy, he said it was important for new developments to relate to their surroundings. When the interviewer pointed out that over time surroundings will change, Erickson agreed. But he added that future buildings should relate to his building designs, and so on.
As I look around Vancouver and other parts of Metro Vancouver, there is no doubt that many new developments no longer relate to their surroundings. Their designs are formed by the significant density bonuses offered in return for amenities, affordable housing and cold hard cash.
Each year Metro municipalities are now receiving hundreds of millions of dollars from developers in return for extra height and density. Many will say this is a good thing; it means property taxes will not have to go up so much.
However, I worry that if we continue to allow housing affordability and CAC payments to drive project densities, heights and massing, we may ultimately compromise the quality of the built environment that has made Vancouver the envy of planners from around the world.