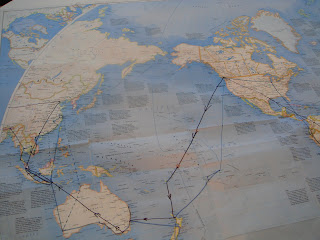 Planning a World Trip takes a lot of planning!
There are certainly a lot more details than when I last set off on a similar trip in 1968. Then I didn't have to worry about organizing next year's Income Tax filing, or transferring files from home and office computers to a new laptop. Nor did I prepare a list of people to contact, bank and investment accounts, or where to find my will, in the event that I didn't get back!

Fortunately, Sally is a good planner. She has arranged for the travel clinic visits, international drivers licenses, and visas, (except for Russia, since the country will not issue one until we know when we are arriving, and where we are staying). I tend to leave things to the last minute, such as the decision to get an MRI scan Friday morning, just in case there really is something wrong with my knee. There is, but I may not need to arrange surgery in New Zealand, as I feared.

Planning our itinerary was an iterative process. Initially, South Africa was a key destination. However, we soon discovered that you can't go to all the continents, even in 8 months. We also discovered that there are many options in terms of planning itineraries, and the cost can vary significantly. Some trips can be very reasonable, less than $3,000 to fly around the world with numerous stops. However, we decided that given the number of flights, and distances involved, we should be flying near the front of the plane, rather than the back. We also didn't want to predetermine the schedule.

So we have booked two around-the-world tickets on Emirates Airlines, and its partners (KLM, Air Pacific, etc). I am happy with this choice, since I have also assumed that Emirates Airlines is less likely to be attacked than say...El Al! While the schedule is open, the flight itinerary is set, as below. (The dates are notional at this stage.)

December 31st, Vancouver to FIJI, then Nadi to Auckland
January 12 to February 9 NEW ZEALAND, then Auckland to Sydney
February 10 to March 2 AUSTRALIA, then Melbourne to Singapore
March 3 to March 9 SINGAPORE then Singapore to KualaLampur
March 10 to April 7 SOUTH EAST ASIA Kuala Lampur to Bangkok
(, , , , ) then Bangkok to Hong Kong
April 8 HONG KONG, then a train into China
April 9 to April 25 CHINA (flights and trains to be arranged)
April 26 to 28, back to HONG KONG, then Hong Kong to Delhi
April 29 to May 13 INDIA
May 14 to May 21, maybe TIBET/NEPAL or BHUTAN (by train) , then Delhi to Dubai
May 22 to May 28 DUBAI, then Dubai to Athens

In addition to organizing the flights, Visas, vaccinations, etc...one of the biggest challenges has been to figure out what to pack. We have purchased Swiss Army luggage, which you can both pull and carry. So weight is a big consideration. Interestingly, the electronics (computer, camera, video, cell phones, a separate portable hard drive, and the various cables, plugs, chargers weigh almost as much as our clothes. 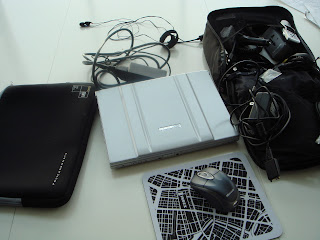 We were initially planning to take golf clubs for New Zealand and Australia, but based on the results of the MRI, and some last minute common sense, that idea has been dropped! We can rent clubs!

We have also rented out our house for 8 months to a lovely couple. However, this means interupting the last minute shopping and packing, to clean up the garden and seal the marble tiles in the shower! Speaking of which, I must go!