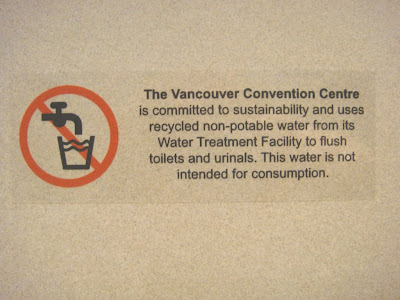 Came across this warning above the urinal in the washroom at the Convention Centre. Quite frankly, I think anyone who drinks from the urinals deserves to get sick.
Posted by michael geller at 4:10 PM 19 comments:

The Canada Line: it needs some help 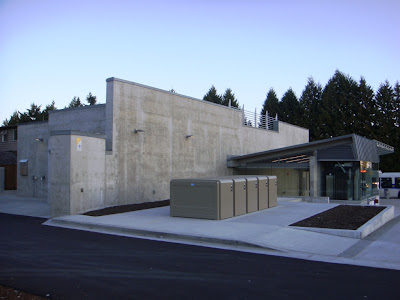 I had a wine tasting event last night for Arts Umbrella at the Convention Centre, so decided to take the Canada Line from 49th and Cambie. While I really like the train, and the trip was good, we really must do something about the stations and signage.

Above is the station at 49th and Cambie. COULD IT BE ANY UGLIER? Surely we can do better. I, and no doubt others, would love to build a townhouse project on the vacant lot beside the station since that would help to partially hide it, and generate some money to improve its appearance. But somehow, I doubt this will happen in the near future. 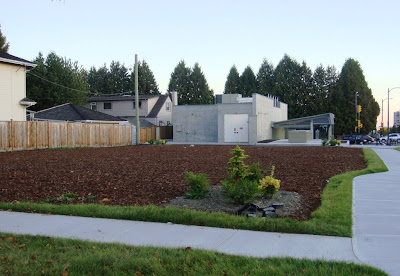 Returning from the Convention Centre, I found these signs at the entrance to the existing station...IS THIS HOW THE DESIGNERS ALWAYS INTENDED TO DIFFERENTIATE THE CANADA LINE FROM THE EXPO LINE? It directed us into The Station. 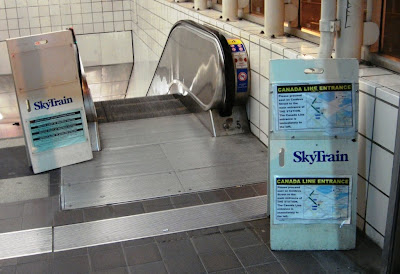 Once inside The Station we looked for the entry to the Canada Line. But it is so poorly signed, especially in the evening, that it was difficult to find. I took this rather poor fuzzy photo. 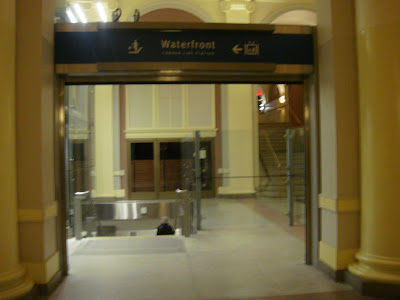 Ironically, when I took the photo with a flash, the sign lit up! Now that's what it probably should be like all the time. 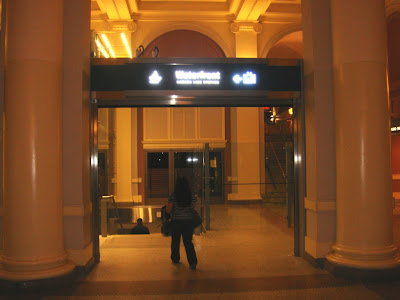 How disappointing. If anyone knows how these bad decisions were made, I'd love to know. But more importantly, let's fix this up before the world comes in February.
Posted by michael geller at 3:39 PM 7 comments: 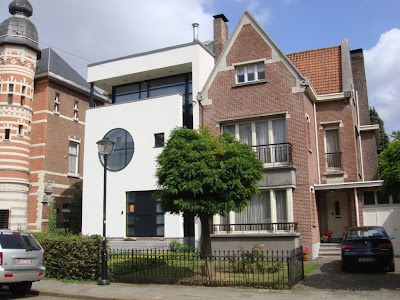 Recently, I returned from three weeks in Belgium and Luxembourg. While I spent a number of nights in hotels, most of my time was spent in a rambling 22-room house in Zomergem, a small village between Bruges and Ghent. While I lived in this former mayor's mansion, which had been lovingly restored, the owner and his family were enjoying my much smaller home in Vancouver.

This was our seventh house exchange. Like all the others, it went extremely well, without any problems. Not only did we exchange homes, we also exchanged cars. However, unlike some previous years, we did not exchange cats or cellphones.

House exchanges are a wonderful way to travel. Not only can you save money, you can also experience a country in a way that is simply not possible when staying in hotels and eating in restaurants.

During an exchange, one also often gets to meet the neighbours. We were fortunate in having Tom and Martine nearby. They both spoke perfect English and helped us better understand the local cultures and customs.

Although summer is now over, it's not too early to perhaps consider a house exchange as a good way for your family to travel next summer.

While Belgium is not as popular as France or Italy as a tourist attraction, it has an extremely interesting history and extraordinary places to visit. And as I discovered, in addition to the wonderful chocolates, it also offers ideas and lessons that could help make our cities more livable and attractive.

One of the first things that I noticed in Zomergem was the way the streets were designed and built to improve traffic safety. Throughout the village -- and in most nearby towns and cities -- bicycle paths are clearly marked with specially coloured paving or asphalt. There is also a separate bicycle highway network with its own numbering system, signage and maps. 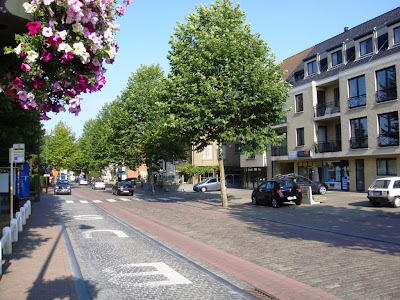 In and around Zomergem, road intersections are raised about 10 cm, or four inches. This is done to caution drivers and help slow down traffic. Some intersections also have large mirrors to improve visibility. Pedestrian crosswalks are very clearly marked, sometimes with tall black and yellow striped poles and additional overhead lighting. When I commented on these designs, my neighbour told me that the country had recently embarked on a very deliberate traffic safety program to reduce the number of fatalities. The goal was no more than 500 a year -- in a country of 11 million people, five million cars and thousands of national and international trucks.

I had no idea how many traffic fatalities occurred in our country, so I did some research. While I was pleased to discover that the number of fatal accidents has been steadily dropping, there were still 2,900 deaths across Canada in 2006. If Canada was to attempt to limit traffic fatalities to the same level as Belgium's proportionately, those 2,900 deaths would need to be cut in half. Improved intersection designs, better pedestrian crosswalks and safer bicycle lanes might help.

Belgium has a great architectural history and cities like Ghent, Bruges, Antwerp and Brussels have many streetscapes full of buildings dating back to the 17th century, and earlier. During the 19th century, many buildings were designed in what is called the neoclassical style and architectural revivalism, which combined various architectural styles from earlier periods. However, at the end of the 19th century, a new style was created in Europe, which became known as art nouveau. Many areas in Brussels and Antwerp were developed in this new, highly decorative style, and while some of the better examples have tragically been destroyed over the years, many good examples remain.

Looking at these buildings, I was most impressed with the attention to detail and efforts to combine architecture and art. I was particularly taken with the beautiful brickwork, which often combined different colours and patterns, including the distinctive "Flemish Bond," which incorporates bricks of different sizes. 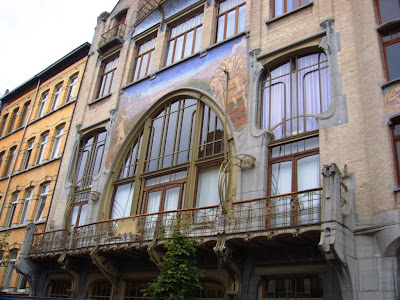 As I admired these buildings, I thought about how little additional effort and cost would be required to make our new brick buildings more attractive and decorative. Yes, architects would need to be paid to include additional details on their drawings, and bricklayers would have to pay more attention to the drawings. But just as in Belgium, our brick buildings will likely last for many centuries and they could easily be designed and built in a more beautiful manner. Why, most Toronto brick buildings have more decorative qualities than what we are building!

While the new housing in Belgium is different than what was built centuries ago, looking around Zomergem and nearby towns, I was fascinated by the differences between new Belgian subdivisions and new subdivisions in British Columbia. For one thing, it is not uncommon to see a variety of housing forms and architectural styles in one subdivision. To conserve land, the new housing form is either open, half-open or closed. 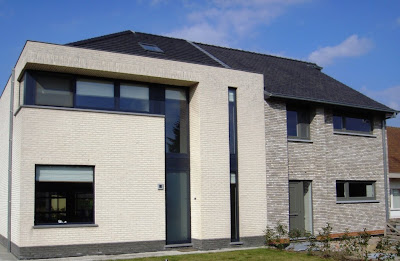 Closed housing has shared party walls on both sides, resulting in what we would call townhouses or row housing. Again, homes in the row are often designed and built by different architects and owners, just as they were centuries ago.

In reviewing the local streets and subdivisions, I was surprised by the number of modern designs being built. In Vancouver, most new subdivision housing seems to belong to another time or place. We rarely see small, modern "West Coast" houses being built in subdivisions or on infill lots.

I believe the Belgians are building more contemporary and interesting homes for three reasons:

- They have a desire to be individualistic and to not always conform.

- They have had a longstanding interest in architectural design.

- Architects are usually hired to design a house, even a small, modest house.

Perhaps there are some lessons for us here, too.

Michael Geller is a Vancouver architect, planner and developer and retired university administrator. His blog on Belgium can be found at gellersworldtravel.blogspot.com on the Internet. For more information on house exchanges visit homelink.org.
Posted by michael geller at 8:45 AM 31 comments: 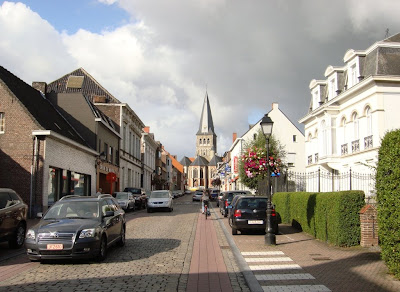