OPINION: With so many empty rooms in Vancouver, why isn’t there more home sharing? Vancouver Courier 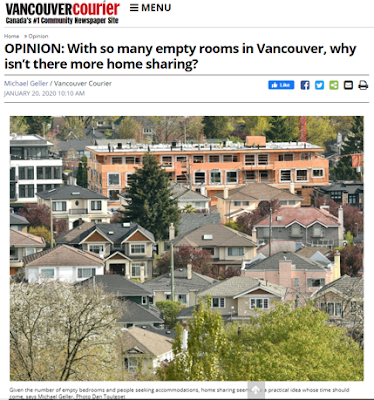 Last week I received a phone call from Stephanie, a Montreal flight attendant for Air Canada Express who’s relocating to Vancouver in March. She has been searching on Craigslist for accommodations close to the Canada Line so she can easily get to the airport. However, like many Vancouverites, she has found home-hunting a very challenging and distressing experience.

One of the most disturbing things is the number of scammers and swindlers out there attempting to trap unsuspecting people desperately seeking rental accommodations. This was addressed in a Courier story last fall by John Kurucz and numerous other online articles.
A Vancity blogpost reported that an estimated 51 per cent of renters in Vancouver and Victoria have encountered a scam.
Given the high price of rental housing in Vancouver, especially compared to Montreal, Stephanie contacted me because she was hoping to find an affordable room in a house owned by another person.
During her internet searches, she came across a Courier column I wrote about the number of empty bedrooms in Vancouver, and benefits of home-sharing, both for those seeking housing and those owning homes with empty rooms.
According to Paul Smetanin of the Canadian Centre for Economic Analysis (CANCEA), the number of spare bedrooms in Vancouver is equivalent to 15 years of construction at the current rate of building.
The challenge is to match those owning empty bedrooms or basement suites, and willing to share, with those seeking affordable accommodation.
Think of it as a VRBO or Airbnb but offering more permanent housing.
While organizations and private companies have sprung up in the United States to meet this demand, including Boston’s Nesterly, founded by a young lady from Cortes Island, only limited options are available in Vancouver.
Last August, CBC’s Early Edition broadcast a five-part radio series produced by Amanda Poole titled Roomies, which looked at various aspects of home sharing, including multi-generational sharing. It examined both the economic and emotional benefits that can arise, along with the challenges.
The series featured on-the-ground examples of shared living, as well as one matchmaker service called Happipad. It was started in the Okanagan in 2017 by a UBC student looking to match those with empty bedrooms and student renters, and describes itself as a cross between Airbnb and a dating site.
Happipad now serves all of B.C. through its home-sharing web app.  It currently has more than 30 live listings in Vancouver, and more are popping up every week.
Happipad connects anyone with a spare room with those looking for affordable accommodation options. It is not limited to intergenerational connections between seniors and students, although these connections do happen.
Happipad's newest initiative is #ConnectAMillion, by which it hopes to connect a million seniors with compatible housemates by 2025 to tackle social isolation.
The CBC series included examples of relationships that worked, and some that did not work, and explored the legal considerations of entering what is essentially a landlord-tenant relationship.
The series concluded with an interview with a community psychology consultant who has enjoyed intergenerational home sharing relationships for over 30 years. He pointed out that while Vancouver’s zoning bylaws do not prevent home sharing, they limit the number of unrelated people who can legally share a dwelling.
Home sharing is not a new idea. In the 1980s, former alderperson Marguerite Ford created HomeSharers that successfully matched seniors until its CMHC funding dried up. Sadly, it did not continue.
On the North Shore, Joy Hayden of Hollyburn Family Services has been working on a seniors' home sharing registry to match senior homeowners with seniors and others seeking accommodation.
Over the phone, Stephanie sounded like a bright, intelligent young lady. I referred her to Happipad but also offered to try and find her a suitable place to live.
If any Courier reader has a home near the Canada Line, and would consider renting to a flight attendant moving to our city, please write to me and I will put you in touch with each other.
I would also like to hear about other home sharing experiences, since given the number of empty bedrooms and people seeking accommodations, home sharing seems like a practical idea whose time should come.

Posted by Michael Geller at 9:39 AM 8 comments:

OPINION: Taxing our way to housing affordability in Vancouver is like bombing for peace Vancouver Courier 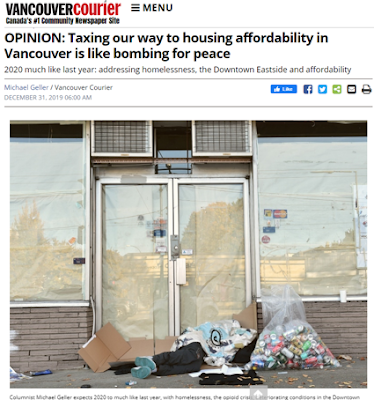 Each new year offers the opportunity to look back and look forward and, for some of us, a compulsion to make resolutions and predictions. I expect 2020 to be just like the past year, but more so.
Once again, addressing homelessness, the opioid crisis and deteriorating conditions in the Downtown Eastside will be top of mind for many.Worsening housing affordability will continue to dominate social and mainstream media and remain a hot topic at parties and dinner conversations.
Debates over neighbourhood planning will continue, especially if Vancouver’s mayor and “abundant housing” activists continue to believe housing affordability should trump all else.
Let’s take a closer look at these three issues and others that will need our attention in the coming year.
Due to poor planning, insufficient affordable housing, poverty, mental illness and drug addiction, conditions in the DTES worsened in 2019. They will likely continue to get worse as long as each level of government looks to the others to act.
In the coming year, we need to offer a broader range of accommodation options for those suffering from mental illness, including institutional care. We also need to expand family reunification programs, employment and grooming services, and create more places for people to congregate during the day.
We also need to prevent the expansion of homelessness into other neighbourhoods, bringing with it the despair and unsanitary conditions increasingly found in the DTES.
One just needs to visit neighbourhoods in Seattle, Portland and San Francisco to see what could happen here.
When it comes to housing affordability, while rezonings that double or triple existing densities will result in some moderate rental suites, in the absence of overall planning, future projects will become more expensive and the quality of the urban environment will decline.
For one thing, the city will not be able to provide adequate physical and social infrastructure. This is already happening along the Cambie Corridor where new developments are now subject to an additional tax to pay for upgrading sewers and water.
Vancouver planners used to require 2.75 acres of new park space for every 1,000 new residents. While the mayor and others support higher density rezonings along Broadway and elsewhere, where are the additional parks? Or has the city decided this park space requirement is no longer applicable?
Many architects and planners privately worry about excessive densification in the name of affordability. While we are embarking on a city-wide planning process, we need more public discussions on when is big too big?
Meanwhile, expect an increasing number of longstanding Vancouver households to cash out and move to Victoria or elsewhere around the province.
In 2020, we need to address the negative impact B.C.’s property assessment system is having on the character of our commercial highstreets since, currently, properties are assessed on their highest and best use, not current use.
As a result, excessive property taxes are forcing out many beloved, legendary businesses. While property assessments will come down in 2020, taxes will not. Indeed, taxes will be higher once the seven per cent property tax increase kicks in.
One solution is to offer tax relief to longstanding businesses, regardless of the value of the property as a redevelopment site, like the provisions of Section 19(8) for longstanding residential property owners.
B.C. Assessment should also review its residential assessment system in 2020. Rather than calculate taxes solely on property value, municipalities should apply different mill rates for single-family and multi-family properties.  While this will increase taxes for owners of detached dwellings, it will reward those choosing more sustainable housing forms.
In 2020, the city’s so-called empty home tax will increase to 1.25 per cent since the mayor promised during the election campaign it would triple. I continue to label it a “so-called empty home tax” since it also applies to residents’ homes that are regularly occupied, but less than six months a year.
Many of these second homeowners have now sold their homes and moved into rental accommodation, where they can live three or four months a year without paying the tax. Expect others to take the city to court in the coming year.
Taxing our way to housing affordability is like bombing for peace. Let’s hope politicians stop doing this in 2020.