How many Gellers are there in the Odessa telephone directory?

One year ago tonight, I made the following presentation at the opening night of Limmud. Limmud is a British-Jewish educational charity which produces annual winter conferences and other events in Vancouver and around the world, focusing on the theme of Jewish learning. Here's my story. 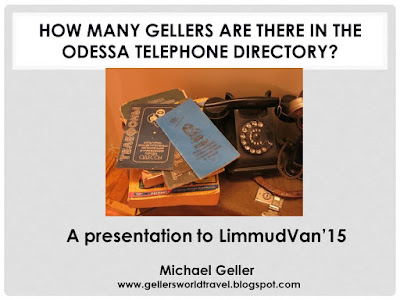 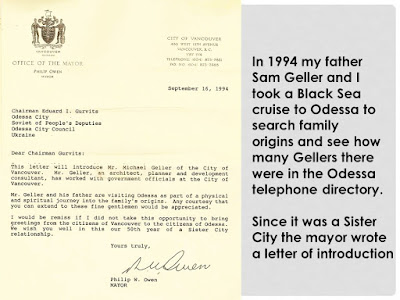 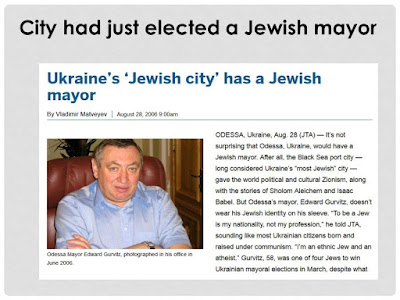 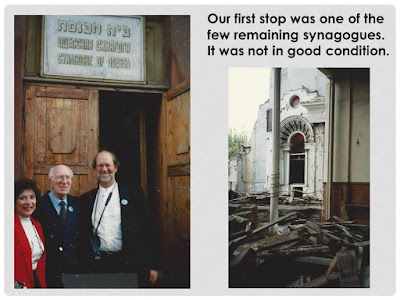 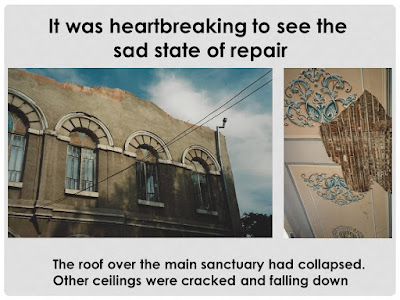 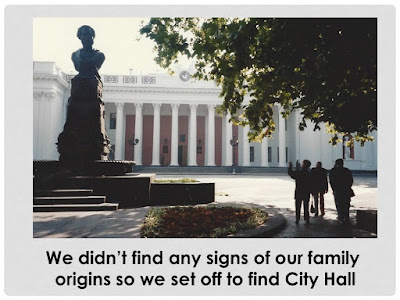 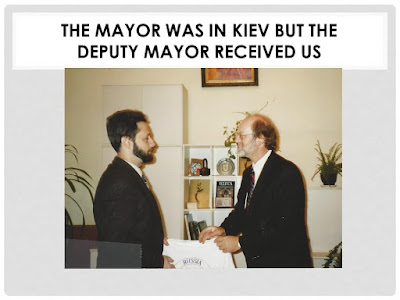 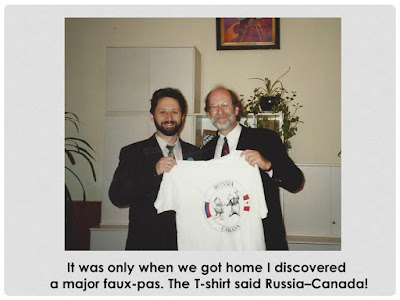 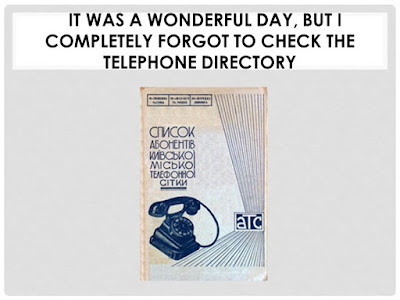 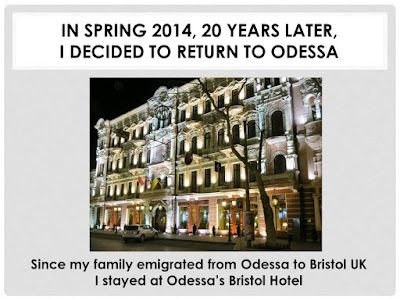 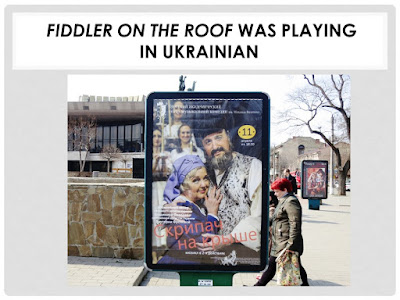 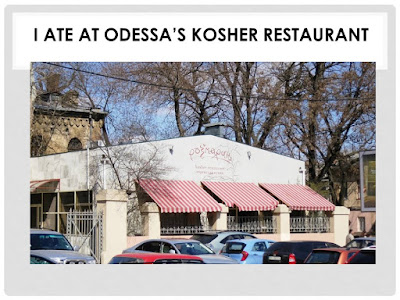 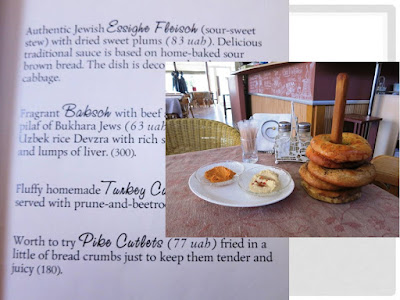 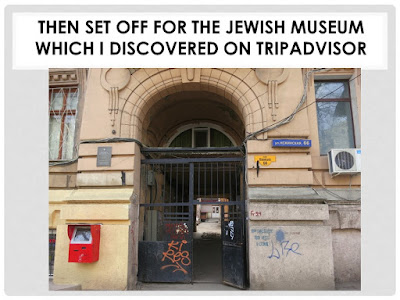 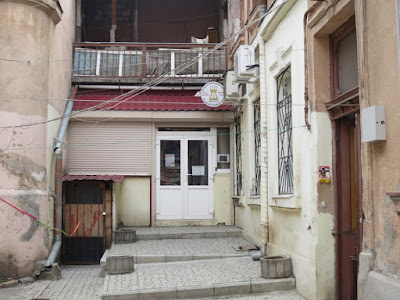 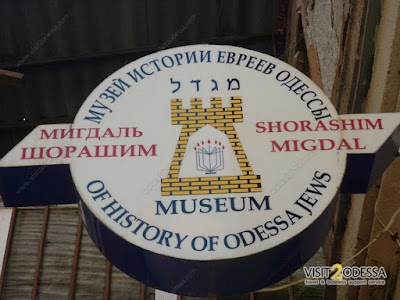 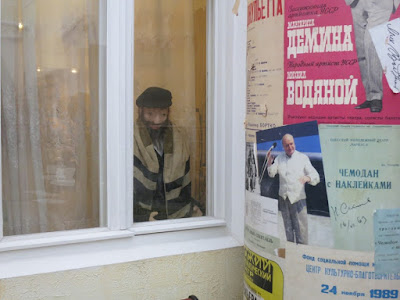 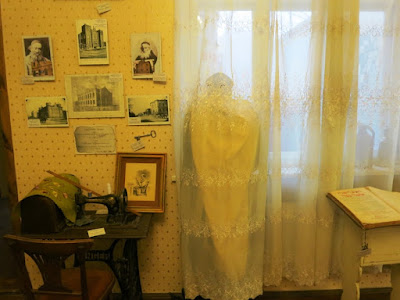 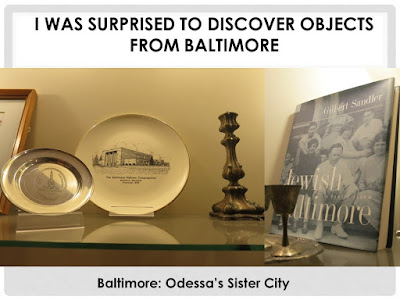 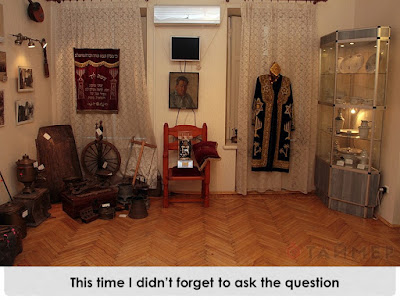 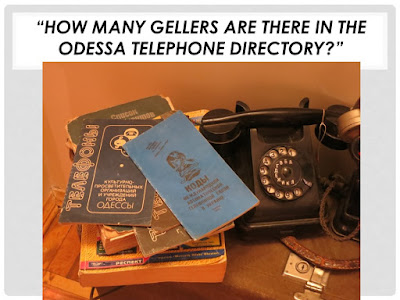 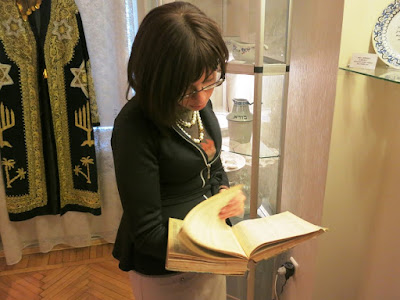 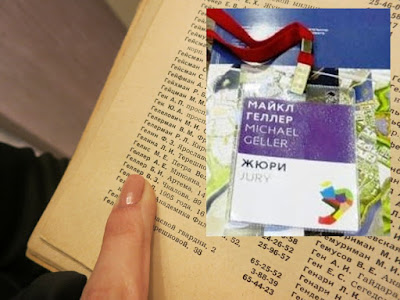 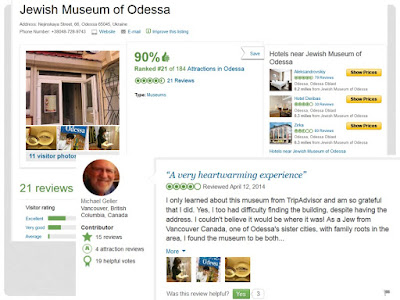 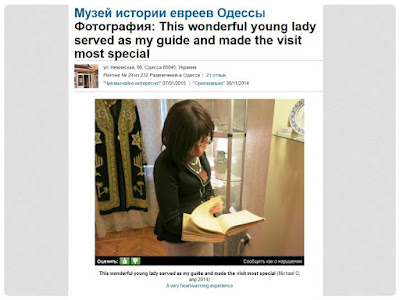 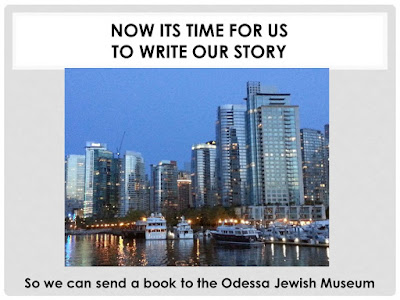 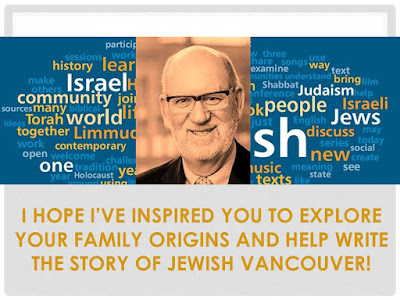 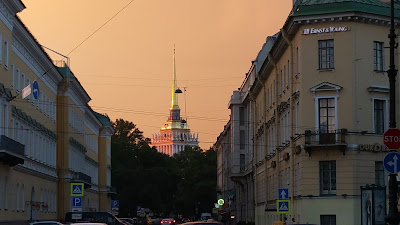 As readers of this blog are aware, over the past two years I have made a number of trips to Russia to participate in three different initiatives, and tour different parts of the country. It is a fascinating place, the land of my forefathers, and I have been impressed with both the heritage sights, as well as many new developments. Since people often ask me what Russia is like, I decided to present another SFU lecture, that incorporates some of my better photos, along with an overview of two very interesting planning competitions with which I have been involved. I will also include some of the more quirky things I have come across during my travels, including therapeutic fish in Sochi, and a price schedule for broken crockery and glassware from a Kazan restaurant.

The following is the notification posted by SFU Continuing Studies.

This lecture will present images of old and new Russia, with a focus on urban development and housing. It will include a review of Russian planning practices and potential lessons from this fascinating country. Be prepared to be surprised by what you see and hear.

Michael Geller is an architect, planner, real estate consultant and property developer with four decades' experience in the public, private and institutional sectors. He serves on the Adjunct Faculty of the SFU Centre for Sustainable Community Development and writes a bi-weekly civic affairs column in the Vancouver Courier. A past-president of the Urban Development Institute, he travels extensively and writes a blog at gellersworldtravel.blogspot.com. 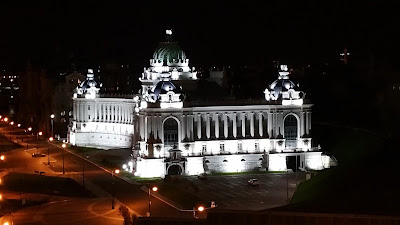 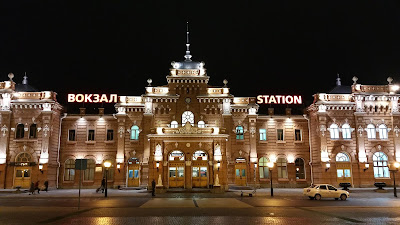 I hope you will be able to join me.
Posted by Michael Geller at 2:14 PM 1 comment:

My late father was often fond of saying that we judge people by what they say and do, but we expect others to judge us by our motives.

This was certainly true this past week when I seemed to create a media storm over the province's property tax deferral program. Details on this program, which has been in place for decades, can be found here http://www2.gov.bc.ca/gov/content/taxes/property-taxes/annual-property-tax/pay/defer-taxes.

From my experience, the program is not well known. Consequently, following the release of the 2016 property assessments which revealed an average increase of approximately 11% across the province, and 16.8% increase in Vancouver, with many single family properties in the 15% to 30% range, I tweeted out that if homeowners were concerned about paying their taxes, they should let Christy Clark pay them for them. I provided a link to the provincial program.

I had a call from a CBC reporter who wasn't familiar with the program. During the conversation she asked if I took advantage of it. I told her I did, and seeing the latest statement from the province on my desk, noted I had deferred $60,000 in taxes over the past 6 years. I acknowledged that I didn't really need to do this since I could afford to pay my taxes, but given the low interest rate (2% below prime) and the fact that the program is open to anyone 55+ (as well as others), I thought it foolish not to. In my case, I invest the money, and generally have achieved a better return than the current 0.85% interest rate charged.

I was surprised to learn the next morning that my interview made the CBC Early Edition news. http://www.cbc.ca/news/canada/british-columbia/property-tax-deferral-michael-geller-1.3391775

While I certainly achieved my intention of raising awareness about the program, the story line that I didn't expect was the outrage that people like me, who are not necessarily low-income, or without means, are using the program.

I subsequently did interviews with Global TV, http://globalnews.ca/news/2438650/how-to-legally-defer-paying-your-property-taxes-in-british-columbia/ various radio stations, http://www.news1130.com/2016/01/06/rich-home-owners-making-more-money-through-tax-loophole/ including an appearance on the Linda Steele show on CKNW, https://www.cknw.com/2016/01/06/the-lynda-steele-show-procrastinating-property-tax/ and received considerable feedback. Many did not seem to understand that municipalities were not losing out-the province pays them the taxes on my behalf- and the province does get the money back on the sale of the property, or at anytime beforehand.

Many people were disgusted with me. It was if I was taking food from the foodbank. They chastised me for threatening the future of a much-needed program, even though I made it clear I was not advocating an end to the program.

However, others agreed that it made sense to take advantage of the program. Indeed, it was foolish not to, especially when the interest rate was so low. (While I didn't promote this, it would even make sense for someone to use the money to pay down their mortgage, which would be at a higher rate.)

The Minister of Finance was asked to comment, and he indicated that perhaps the province will reconsider the terms of the program.

By Thursday the story was over. However, I do believe that the province should reconsider the program terms. I also think it's time to have a broader conversation about whether those 55+ or 65+ still deserve the special concessions offered by our society, whether it is tax deferral or cheaper cinema tickets. But that's another story for another day.

Co-ownership housing, taller highrises, will be among the residential attention getters in 2016, industry observer believes

Now that the new year has arrived, it is tempting to predict what might happen in 2016. While some things are certain — most of us will not lose weight or exercise as often as we plan — other things are less certain, especially when it comes to housing.

Two years ago, I had the opportunity to share some 2014 predictions with Westcoast Homes readers. Before I share my predictions for 2016, let’s review how I did. My first prediction was that alternative forms of housing found in other world cities were likely to become more popular in Vancouver. An example was individually-owned “fee-simple” row houses that are not part of condominiums. My feeling was many people wanting to downsize from a single-family house would be seeking the amenities of a row house, but were worried about dealing with a strata council and condominium bylaws.

I also predicted more municipal planners would promote row housing as a higher-density form of housing that fits nicely within single-family neighbourhoods. Over the past two years, row houses have become much more popular throughout Metro Vancouver and other parts of the province. However, fee-simple row house developments are not yet as numerous as I predicted. This is due, in part, to the additional costs of separate water and sewer hookups. However, there is a way to get around this, and I still maintain we will see more of this housing in 2016, especially if municipal engineers and lawyers are co-operative.

Based on the success of Hollyburn Mews, a small West Vancouver development combining duplexes and coach houses that I completed in 2013, I predicted 2014 would see a start on more similar developments. I was wrong. While the demand for this type of housing increased, most companies were busy building larger single-family houses and not inclined to embark on the complex rezoning process required for these forms of housing. However, a number of cities and municipalities, including Kelowna and West Vancouver, are now actively promoting alternative housing choices, and hopefully, similar new infill housing developments will get underway in 2016.

New heights expected
In 2014, I predicted highrise buildings would rise higher and higher, especially in urban centres and near transit stations. I was right. Some new buildings in Burnaby and Surrey were much taller than I anticipated. Expect to see even taller buildings approved in 2016 around Metro Vancouver, except in Richmond, where building heights will continue to be dictated by airport flight paths.

Two years ago, I predicted more Toronto-style stacked townhomes, especially in locations appealing to younger buyers. Again, I was right. One just needs to visit East Vancouver, Burnaby, North Vancouver and a few other locales to see the growing popularity of this housing form.
If interest rates rise — and I expect they will marginally in 2016 — more builders and developers will regard stacked townhouses as an attractive alternative to conventional low-rise apartments and row houses.

In 2014, I predicted six-storey wood-frame apartments would become prevalent. Driving around the region, we can see this is now happening. Six-storey wood-frame buildings are becoming the new normal, and in the coming year, we can expect more municipalities to change their zoning bylaws to permit this form of building, especially along arterial roads.

Following the success of laneway housing in Vancouver, I predicted other municipalities would approve coach houses and backyard cottages on single-family properties. This has proven true in the Districts of North and West Vancouver and other municipalities. However, to date most of these homes are rental only. Hopefully, municipalities will allow more laneway and coach houses to be sold this year, especially since households are now purchasing these units through complex legal and financing structures facilitated by the innovative financial institution, Vancity.

A number of my other 2014 predictions did not come true. We did not see many European-style mid-rise developments, similar to those being built along Cambie Street, outside of Vancouver. Nor did we see a renewed interest in 12-storey buildings similar to those built decades ago in Kerrisdale Village.

Nonetheless, I will conclude with four new predictions for 2016. As a result of the 2013 provincial legislation requiring strata councils to commission depreciation reports on their project’s condition, and a recent legislative change allowing the dissolution of a condominium with 80 per cent approval by owners (rather than 100 per cent), we can expect a number of older condominium projects to be sold to developers in 2016. Many other strata councils in older projects will start to investigate the feasibility of future sales.

I also predict a growing interest in co-ownership housing — a hybrid form of development that combines the best of co-operative and condominium living — and smaller housing co-operatives for empty nesters ready to downsize but wanting to live in a multi-family complex, where they can decide who else gets to move in.

Architectural heritage will continue to be a hot topic in 2016. In an effort to stop the destruction of some of Vancouver’s finest old houses, in 2015 Vancouver city council approved a Heritage Conservation Area designation for a portion of Shaughnessy. While I do not expect other conservation areas to be approved in 2016, I do predict more municipalities will develop heritage policies so they can offer incentives through heritage revitalization agreements to those prepared to conserve, rather than destroy, character homes. These incentives will permit construction of coach houses and infill housing for sale, and thus create new housing choices for those ready to move up in the market, and those ready to downsize.

In 2014, I told Vancouver Sun readers not to hold their breath waiting for a decline in house prices. While I do not expect the dramatic increases of the past two years to continue, as long as our region remains attractive and livable, the continued influx of immigrants and aging baby boomers from other parts of Canada will temper any significant decline in prices in the coming year.

Once again, time will tell whether my predictions are right. In the meantime, best wishes for a happy, healthy and comfortable 2016.