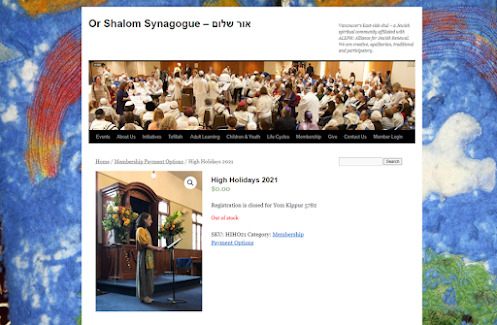 I grew up in an orthodox Jewish family in Toronto. Yom Kippur was a very special day. In accordance with customs and tradition we did not go to school or work on Yom Kippur. But it went further than that. We did not do any work and for reasons I could never understand we did not turn on lights...we didn't even tear toilet paper! (We tore off sheets beforehand.)  From the age of 10 I started to fast for part of the day. By the age of 13 I fasted the whole day.

The thought that one day I might be posting a blogpost on Yom Kippur would have probably have given my mother a heart attack.

These practices continued until I moved to England in 1968 and experienced a very different Yom Kippur. Although I was living in Manchester, I went to London and spent the holiday with my cousins. Two distinct recollections are that older men wore hats in the synagogue, not just yarmulkes. But more importantly, after the synagogue service ended and we 'broke our fast', we went off to a big party. Jewish kids often met their life partners at the celebrations following Yom Kippur.In subsequent years I have enjoyed memorable Yom Kippur holidays in Vancouver, Ottawa and Toronto. While I have continued to fast each year, other traditions have developed. Since 1968 (with one hiatus) I have kept a diary and every year, in the afternoon between services I would review my diaries from past years. (It is generally the only time I review them, other than to check out something specific.)

Three years ago I enjoyed a most memorable Yom Kippur. Just before the holiday, I had been invited to give a talk in Moscow, and eleven days later was scheduled to give a talk in Kazakhstan. Rather than return to Canada, I decided to spend Yom Kipper in Eurasia, but couldn't decide between Azerbaijan or Georgia. Azerbaijan was appealing since I discovered a community called Qirmizi where everyone was  Jewish  https://en.wikipedia.org/wiki/Q%C4%B1rm%C4%B1z%C4%B1_Q%C9%99s%C9%99b%C9%99

However, since I was concerned I might not get internet service and hence be able to use Google Translate, I decided to go instead to Tbilisi Georgia. I booked into the Tiflis Palace Hotel https://tiflispalace.ge/english/home because it was close to the Grand Synagogue and had a most remarkable day. You can read about it here http://gellersworldtravel.blogspot.com/2018/09/ 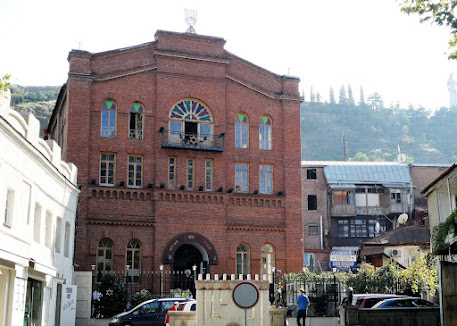 This year, Yom Kippur is also quite unusual. While the synagogue I currently attend Or Shalom is holding its service in the Jewish Community Centre, as it has done for years, attendance is limited and the service is also being broadcast over YouTube. (Services were previously held on Zoom, but sadly, one was 'Zoom Bombed' and so YouTube is being used. It's not the same since you can't see the congregants. Furthermore, many of the people I am accustomed to seeing in synagogue including the Wosks and Wassermans were not there for last night's service.

At any rate, I will now head off for services. As I finish this, I can't even try to imagine what my  Yom Kippur traditions might be like ten or twenty years from now, assuming I am still around. That said, this is still a special day for me, and while I did feel a bit guilty sending off a couple of important emails before sitting down to write this, I will try to enjoy a day of reflection, and atonement, which is what this day is about.

Wishing any Jewish readers well over the fast!

While in Quebec City, on the suggestion of my friend Michael Seelig, I visited Moishe Safdie's Museum of Civilization. https://www.mcq.org/  It is an impressive space, reminiscent of some of Safdie's other galleries with some interesting permanent and temporary exhibitions. However, one of them was most intriguing, an exhibit on feces. Yes feces. Here's some more detail from the website  https://www.mcq.org/en/exposition?id=819704

Feces, excrement, turd, dung, caca, dump, stool, shit, defecation, bowel movement or crap… Call it what you will, poop is a taboo and misunderstood topic. Often referred to with rawness, it's well acquainted with comedy, but rarely is it addressed seriously… Yet, there is so much to be said and learned about this universal organic matter! Everybody has to go, regardless of their social ranking, their gender or beliefs!

In these times when food, nutrition, well-being and body consciousness are overflowing the media, poo is altogether "flushed" from cultural and social discourses.

What about diving in headfirst to better understand its social history, the issues at play and how it can be put to good use?

Although its name might change, reactions triggered by poop are basically the same for most people: disgust, denial, dread or disinterest. Nevertheless, fecal matter is part of us and our daily lives. Stools can tell a lot about our health, our eating habits, and even more about how we relate to our bodies and intimacy. Furthermore, it is also the root of sociological and environmental issues we wouldn't even imagine. Did you know that a large part of human population does not have access to sanitary toilets? That some women in developing countries risk their lives every time they need to defecate? Understanding poop and how we deal with dejections can lead to understanding how we live as humans.

You'll discover all of this in the five zones that make up this bold exhibition. As you move from one to the other, the way you look at what is turning out to be the world's most underestimated and inexhaustible resource changes. Get wind of the issues surrounding its management, right here in Québec and around the globe. Learn about sanitary crises and issues, as well as hope surrounding the possibilities of reuse of human waste.

A strong corpus of ancient and contemporary objects, gathered from the Museum's collections as well as foreign lenders, embodies the circuit's intellectual and nuanced scientific discourse. There, among other topics, you will cover history, anatomy, intestinal microbiota, anthropology, as well as contemporary ecological, social and environmental issues. Let's not forget its representations in the Arts! Because, believe it or not, shit can be inspiring!

Over the years I have been fortunate to have many opportunities to travel to different parts of Canada. From 1972 to 1981 I worked for CMHC and worked on projects in all 10 provinces. Some weeks I would travel to two or three provinces, not unlike politicians during an election campaign. One of my favourite places to visit was Quebec since it was so very different from the rest of Canada. In order to work there, it was necessary to improve my French, and I therefore started language training classes. When I moved to Vancouver in 1974, CMHC agreed to allow me to continue my classes, which upset many architects and developers who were told I wasn't available to discuss their project since I was "at French".

In 1981 I left CMHC and returned to Vancouver where I joined Narod Developments. My first major project was the planning and approvals for the redevelopment of he BC Packer's Lands on the Steveston waterfront in Richmond. While this did not require me to speak French, it did require me to learn how to play golf, since that was an integral part of Narod's corporate culture. While I have enjoyed golf for forty years, I was not very good at it, and never below a 16 or 17 handicap. But this brings me to golfing in Quebec City.

As I wrote in 2018 http://gellersworldtravel.blogspot.com/2018/08/the-canadian-seniors-golf-association.html  approximately 5 years ago I became a member of the Canadian Seniors Golf Association, a national organization that recently celebrated its 100th anniversary. Every year, the group travels to another city for an annual tournament (well, every year except for last year) and this year the tournament was held in Quebec City. While many members were reluctant to travel, I decided to register since it had been 40 years since I was last in Quebec City and had fond memories of past visits. The CSGA had organized a few hotel choices, but unfortunately the Chateau Frontenac wasn't one of them. I decided to stay at the Chateau Laurier, since I was surprised to see there was a Chateau Laurier in Quebec City and wanted to see how it compared with the venerable Chateau Laurier in Ottawa. It didn't.

To minimize the chances of getting ill on the plane, I decided to book seats at the front where there was greater separation space between passengers. There I found another BC golfer, Peter Butler, a long time member of the CSGA who plays at Point Grey. Unfortunately, our flight to Toronto was delayed due to chaos at YVR security, and our baggage did not get onto the flight to Quebec. While initially I wasn't concerned since there was a later flight, I should have been concerned.

Although some  on the next flight saw my golf clubs come off the plane in Quebec, they were not delivered to the hotel as promised. Similarly, our luggage remained lost. I went onto the Air Canada 'delayed baggage tracking site' which indicated my clubs and baggage were on their way to the hotel. However, Peter and two friends had planned to play golf on Sunday so they went to the airport to find their clubs. While their clubs had not arrived, they found my clubs in a semi-secured baggage area. Since there was no one around, they took my clubs with them to the golf course.

Eventually the other clubs and luggage did arrive, but what I learned was that the Air Canada delayed baggage tracking system is useless, and it makes no difference whether you're in Business Class or Economy when it comes to getting delayed luggage. While  I can appreciate that Covid-19 has impacted the airports and Air Canada's operations, Air Canada needs to do a better job of tracking luggage.

That said, the golfing trip was most enjoyable. Quebec City was full, and while people wore masks, and you had to sign into restaurants, you wouldn't know we are still in the midst of a pandemic. We played two courses, Royal Quebec and Cap Rouge, and while the venerable Royal Quebec, founded in 1874 was in better condition, I thought Cap Rouge was much more interesting and enjoyable to play.

After the tournament, I went and stayed at the Manoir Richelieu, a beautiful Fairmont Resort property where the G7 world leaders conference was held a few years ago. I stayed one night but should have stayed longer, but that's another story.

Next year, the CSGA is off to Georgian Bay. All being well, I'll be there. In the meanwhile, a few photos for those of you who enjoy golf and travel. Cheers