Today I am ashamed to be a Vancouverite. The Vision members of Council approved the Empty Home Tax bylaw with only a few housekeeping modifications, and continue to consider a second home that is occupied 179 days a year to be deemed 'empty' as far as the tax is concerned. It's nuts.

When I asked the staff person from Planning Department responsible for the report if he was aware of any example of a successful application of a vacant home program in London or elsewhere, he couldn't give me one.

When I asked why the recommended taxing second homes, he replied their consultant said anything less than a 180 day threshold was not workable, noting programs that require you to log days isn't workable. While that is not what I asked, I have now requested a copy of this consultant's report.

At any rate, the matter has been decided and life goes on. But below, for the record, are my speaking notes . A year or two from now, I will be interested to see just how much this program ultimately costs to administer, (the estimate has tripled from an initial $2.5 M to over $7.4) and how much revenue it brings in, and how many units truly come onto the rental market. I hope I'm pleasantly surprised, but somehow I don't think I will be. But the tax has achieved its objective of pandering to those voters who feel the city must do more to address housing affordability, especially those who invaded the council chamber yesterday screaming TAX THE RICH, HOUSE THE POOR!


Empty Home Tax
·       My name is Michael Geller & I’m here speaking on my own behalf, as someone with a longstanding interest in housing policy. I’m not here as a paid consultant or as someone affected by the tax

·       Like you and everyone in this chamber, I am disturbed by the number of empty or vacant dwellings in the city and would like to see them put to use, rather than serve as safety deposit boxes for investors

·       So why am I here today? The city has repeatedly stated the goal of this tax is to bring empty and vacant units onto the rental market.

I am not here to talk about empty or vacant dwellings. I am here to point out that there are many occupied HOMES which under this bylaw are ‘deemed empty’ that have become collateral damage under this tax. It is unfair to start taxing them under this bylaw when they are not empty.

·       These are the second homes of BC residents, Canadians living in other parts of the country, (some of whom once lived here or have family here) and yes, Americans and Chinese and Germans and so on). They are owned by BC politicians who regularly come into Vancouver; former residents who regularly return to see family, or for medical attention.

·       Again, These properties are not empty. Some are occupied throughout year on weekends or weeks at a time; others are occupied for 4 or 5 months over the summer.

·       As you know I have been complaining about this aspect of the tax in the media & social media. Many have criticized me for advocating for people who own two homes when so many in the city can’t even afford to rent one, adding anyone who owns a second home can afford to pay the tax.

·       However, others have noted that by going after second home owners, this appears to be little more like an envy or jealousy tax. They see it as vote pandering to those who want to tax the rich to house the poor. (I gather than some of them were here to disrupt yesterdays council meeting).

·       Let me repeat. These second homes cannot be rented out when the owners aren’t here. Your bylaw might force the owners to sell their condos, but surely that’s not your objective. (I will add for the benefit of Tom Davidoff and others that when they are sold, the owners will pay Capital Gains Tax on any appreciation.

·       I strongly believe this tax will have a better chance of success, be more cost effective to administer, and be deemed more equitable if you amend the wording of the bylaw so that it clearly distinguishes between truly empty units, and those occupied for many months each year, but less than 180 days.

·       Your staff are clever enough to draft the revisions.

When I questioned  the staff person administering the bylaw why this tax was applying to people owning second homes, I was told second home owners had choices. When I asked what choices, I was told they could pay the tax or sell their unit.

·       I sincerely hope members of Council do not think these are reasonable choices to offer someone who has chosen Vancouver as a place to live, including the Singaporean who according to the Vancouver Sun recently offered to build an art museum for the city because he loved our city so much after keeping a home here.

·       Finally, to truly increase the supply of rental housing, I urge you to address the problem of investor-owned Airbnb’s. These are having a far greater negative impact on available rental housing stock.

·       I also urge you to approve the backlog of rental housing projects in the system. When I last checked there are hundreds of rezoning and development permit applications awaiting approval, many of which include rental housing

·       Improve the city’s zoning to reduce number of rezonings.

·       I also recommend that the city set up a matchmaking service so that those who have empty suites, and there are hundreds of them, and even empty bedrooms, can make them available to those seeking affordable homes.

Thank you for your attention. 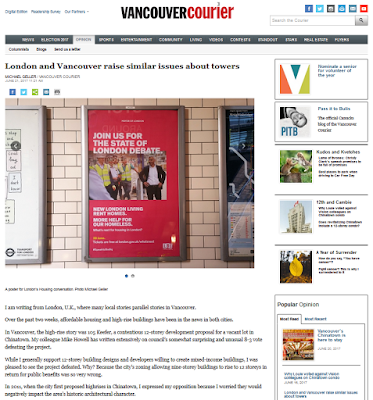 I am writing from London, U.K., where many local stories parallel stories in Vancouver.
Over the past two weeks, affordable housing and high-rise buildings have been in the news in both cities.
In Vancouver, the high-rise story was 105 Keefer, a contentious 12-storey development proposal for a vacant lot in Chinatown. My colleague Mike Howell has written extensively on council’s somewhat surprising and unusual 8-3 vote defeating the project.
While I generally support 12-storey building designs and developers willing to create mixed-income buildings, I was pleased to see the project defeated. Why? Because the city’s zoning allowing nine-storey buildings to rise to 12 storeys in return for public benefits was so very wrong.
In 2011, when the city first proposed highrises in Chinatown, I expressed my opposition because I worried they would negatively impact the area’s historic architectural character.
Former director of planning Brent Toderian recently disclosed to his Twitter followers that planning staff were also opposed to Chinatown height increases. Sadly, council ignored the staff recommendation and sided with misguided Chinatown merchants who thought highrises would bring more people and “body-heat” into the community.
I do feel sorry for the developer who spent many years and a lot of money doing precisely what staff and council encouraged him to do, only to be turned down. While I hope a future revised Chinatown zoning policy will restrict building heights to something in the order of 70 feet, if Beedie Development Group wants to proceed with a nine-storey proposal for this site, this should be permitted. They have been punished enough.
While many regarded the rejection of the 105 Keefer project and loss of 25 affordable housing units to be a tragedy, it was nothing compared to London’s recent tower tragedy. Much has been reported about the Grenfell Tower inferno; however, much more discussion and investigation is warranted. 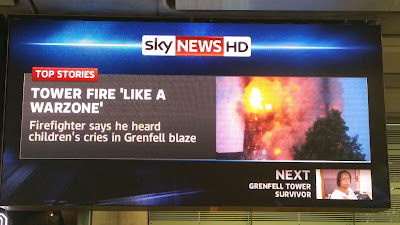 Over the past week, many U.K. columnists and pundits have argued this disaster vividly highlights why highrises should not be built for lower-income households. They are wrong. Suitably designed high-rise buildings can most definitely provide suitable accommodation for lower-income households.
This disastrous fire resulted in part because a contractor inappropriately covered a 24-storey building with a non-fire resistant exterior cladding intended for buildings up to three storeys. I should add that Canadian fire codes would prevent a similar product from being installed on a Canadian highrise.
There’s another aspect to this story that is somewhat relevant to British Columbia.
While most residents impacted by this horrendous fire were low-income, the building was not restricted to low-income households. Like most English Council flat developments, over the years, apartments had been sold off or leased at market rates to higher-income households.
In B.C., the government has also been selling off public housing to private sector and non-profit companies. In principle, I support broader income mixing in these projects. However, as future B.C. provincial governments contemplate the sale of additional public housing, it may be wise to carefully analyze the U.K. experience.
While the Grenfell fire dominated U.K. news, another major U.K. story had eerie similarities to B.C. I write, of course, about its recent election, which resulted in no clear winner, and many questions about how long a coalition government might last. 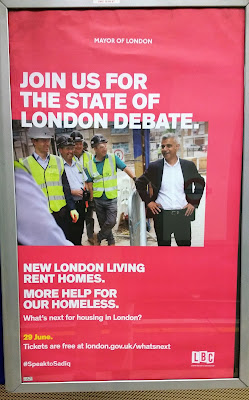 Thanks (or no thanks) to the Internet, it is difficult to avoid what’s happening in Vancouver when travelling abroad. While I was reading about Mayor Gregor Robertson’s recent Big Conversation event on the future of housing in Vancouver, I couldn’t avoid posters inviting Londoners to join London Mayor Sadiq Khan for his June 29 State of London Debate: New London Living Rent Homes — More Help for our Homeless — What’s next for Housing in London? Hashtag #SpeaktoSadiq.
While Robertson hopes his Empty Home Tax will encourage owners of empty condos to lease them to needy renters, England’s Labour Party leader Jeremy Corbyn is calling for Kensington and Chelsea homes left empty by millionaires to be used by victims of the Grenfell Tower tragedy.
This won’t happen, of course. But when it comes to affordable housing, politicians on both sides of the Atlantic seem most willing to say and do whatever they think it takes to attract future votes.

Whenever I go to London, I always spend time riding double-decker buses, both day and night, admiring the variety of streetscapes. On previous trips, I have taken the hop-on-hop-off tours since you learn facts that you otherwise miss just walking around. On this trip, we took a 'night bus tour' leaving from just outside the Ritz Hotel. Unfortunately, since mid-June days are so long, it wasn't really dark enough to fully appreciate how many buildings are lit up at night. But it was quite magical seeing some of the city's grand sights, such as Big Ben, Westminster Abbey, Westminster Cathedral as the sun was beginning to set. 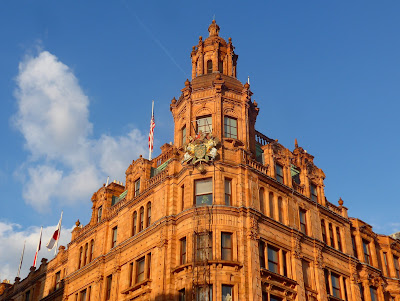 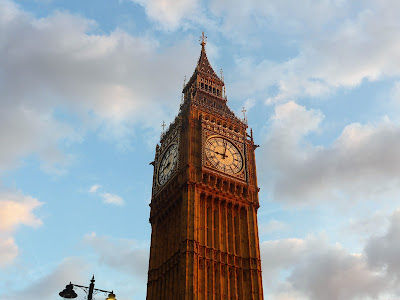 As I look at some of the newer London buildings, it is difficult to believe that the architects are somehow related to the architects who designed the buildings of the past. But then again, when you look closely, you realize that many of the older buildings were often just as bizarre as what is being built today. That being said, I appreciate how many of the buildings built in previous centuries respected their context much more than some newer buildings. 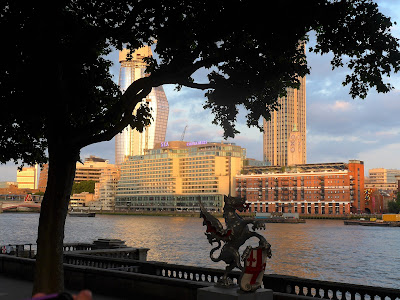 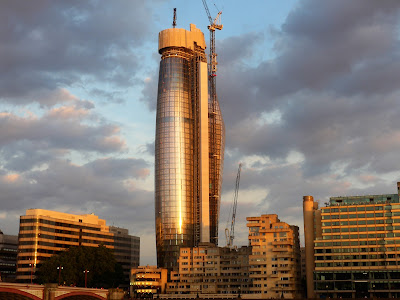 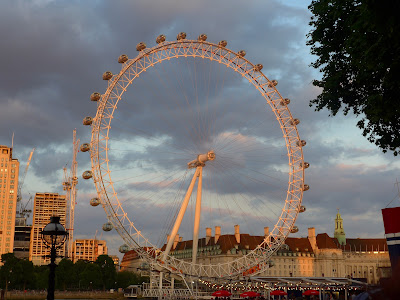 I took a special trip to see the massive and significant new Battersea Power Station development, about which I am writing a column for the Vancouver Sun. The very glassy buildings are a significant departure from London's architecture of the past. However, I can't, for the life of me, understand what they were thinking when they designed what seems like an absurd open wooden decking balcony deck detail. 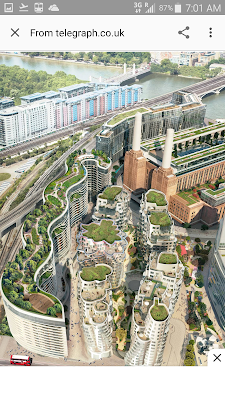 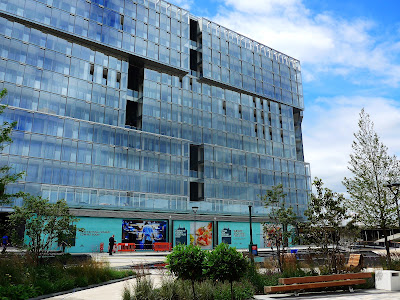 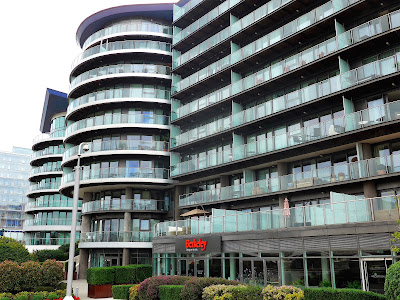 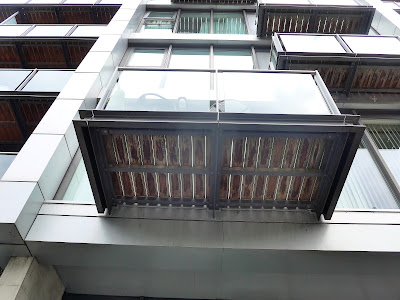 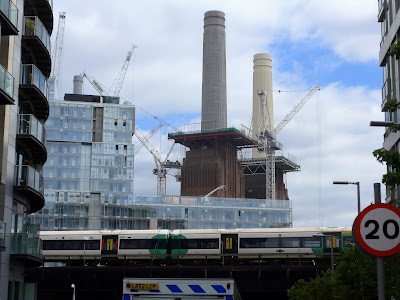 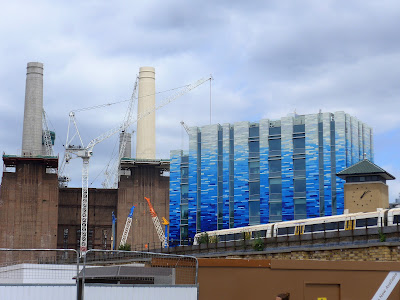 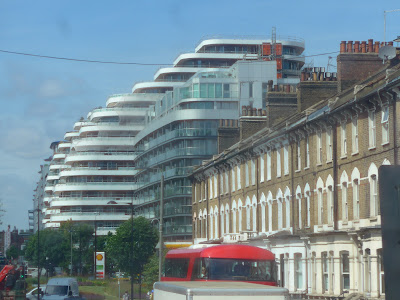 Here are a few more photos of what I saw riding the upper deck of London buses. 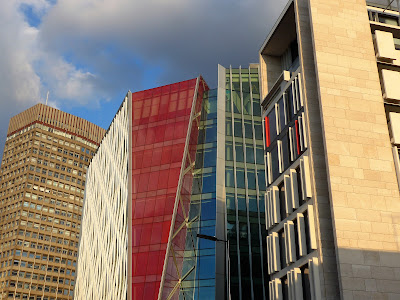 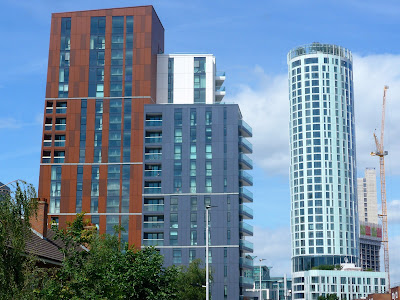 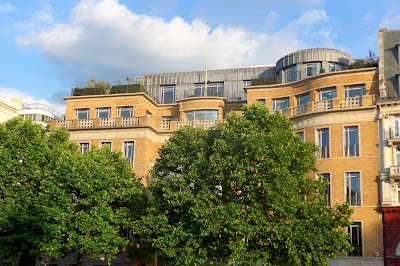 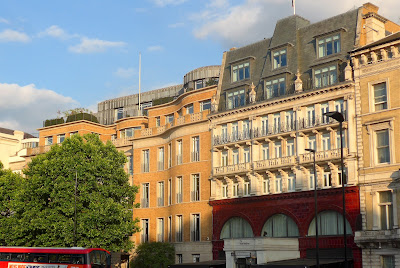