Is bicycle theft a deterrent to city cycling? 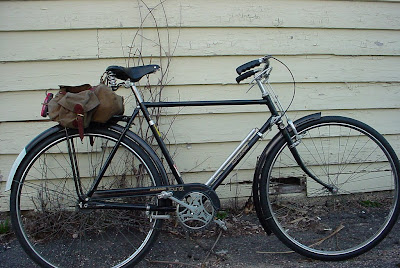 Recently, Translink invited NY Transportation Commissioner Janette Sadik-Kahn to Vancouver to talk about making the city more bicycle friendly. While I had to miss her talk, I understand from Frances Bula's story in the Globe and Mail that she indicated that one of the main reasons people do not want to ride their bikes is their concern about leaving their bikes on the street during the day.

I would like to echo her comments about the need for greater security for bikes. From my discussions with many cyclists and bike shop owners, and my own experience as a ‘new’ cyclist, I am convinced that far too many people are deterred from cycling because they fear their bikes will be stolen. And with good reason. Far too many bikes are stolen. Even bikes like my 70's Raleigh Tourist (see above).

The solutions? Bike cages are one idea that might work, especially located near transit stations (SkyTrain, etc.) with video monitoring. No doubt many of you have other ideas.

If your bike is stolen, how many of you have thought to have someone etch your drivers’ license number onto your bike? This apparently is one idea to help get stolen bikes back to their proper owner. Not as good, but better than nothing is to go home tonight and make a note of the serial number on your bike. It’s there somewhere on the frame.

My daughter tells me the story of her friend who works as a DJ at the Astoria and had her bike stolen. So while doing one of her shows she asks around…who’s the asshole who stole my lovely black and pink such and such a bike? After buying a few drinks, she had it back.

Apparently ‘everyone’ in the DTES knows who steals a lot of the bikes in the city. The locals just pay to buy them back. I don’t think this is acceptable. In this case, it’s not just the theft of a possession; bike thefts are potentially undoing all the good of improved bike lanes, greenways, etc.

I hope city staff and the police can come up with a comprehensive plan to deal with the significant number of bike thefts. I’m convinced this could have a very positive impact on the number of cyclists in the city.

Posted by michael geller at 8:21 AM

Michael,
I agree with you on your statement of theft of bikes deterring bike commuting.
I've had several bikes stolen as a result of riding them to work, groceries and even the pub.
Now I drive . . . sadly.
If the identities are known of the few that do steal bikes . . . can I have their names to have a chat . . .
Thanks
-bt-

Duh. It takes New York's transportation commissioner to figure this out?

Every time I'm in the DTES I see grubby men with shiny new bikes. Hence the "everyone" knows who steals bikes - cops included.

Just the other day I saw a couple of toothless DTES folks hop on the bus with a fancy new ride.

I know it's hot, the person next to me knows its hot and so does the bus driver. But no one's ever going to call the police.

Why? Because we have little faith in police. We know they don't want to be bothered.

These are in fact great ideas in regarding blogging.
You have touched some good factors here. Any way keep up wrinting.