A few years ago, after a round of golf at Point Grey Golf Club, a former banker who knew I liked to golf and travel asked if I was interested in joining the Canadian Seniors Golf Association. It offered the opportunity to play in tournaments across Canada and around the world. The membership criteria, he told me, were to be over 55, have a handicap of 18 or less, and be good company. I told him I was one out of three!
But my name was subsequently put forward for membership and after I was accepted, I mentioned it to my friend Holly Horwood, one of Canada's top amateur senior golfers.
"Really?" she exclaimed. "It's an impressive organization and difficult to get in. Many people wait for years, before being admitted."
My first event was a tournament in Montreal at the Royal Montreal and Beaconsfield golf clubs, two of the oldest and established courses in Canada. I included some photos in an earlier blog about Montreal http://gellersworldtravel.blogspot.com/2016/08/six-days-in-montreal_31.html. 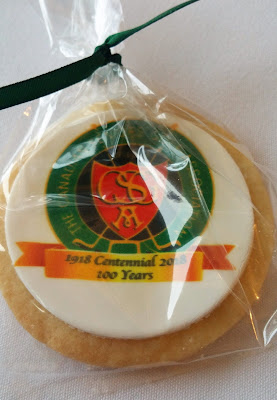 This year, the organization celebrates its 100th anniversary and the tournament was accordingly in Toronto. We played at two of the city's most established courses, Rosedale and Scarboro. Rosedale is one of the country's most exclusive clubs (I was told the initiation fee is around $100,000 with a 7-year wait list). It recently celebrated its 125th anniversary.
Scarboro was designed by the legendary golf course designer A.W. Tillinghurst and opened in 1912. In those days the train brought golfers out from downtown and today the GO-TRAIN regularly runs beside the course.

Playing Scarboro had a special significance for me since after my parents emigrated to Canada in 1952, we first lived in a small apartment on Scarboro Bluffs . In those days, I wasn't playing golf. I probably didn't know what it was. Instead, I was trying to learn how to skate and play hockey with Macleans magazines tucked into my socks as shin pads.
Here are a few photos from the three-day event. While they don't do justice to either facility, the tournament was a most enjoyable experience and I would like to thank all the people who gave me rides to and from the clubs (when I wasn't using Uber), and were such good company both on and off the golf course.
Next year, I'll be at Royal Ottawa and Hunt Club. While I won't be wearing a red blazer, I will try to remember to bring my special tie and name tag, and play a little better.
ps. On my way to the golf club I noticed this public housing apartment building that had been decorated with a full height painting on a staircase. I thought it was a very attractive measure and much more delightful than the awful new mural on the Onni building in downtown Vancouver. 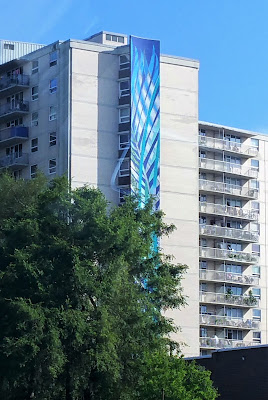 Posted by Michael Geller at 9:54 AM

Wonderful blog Michael. Congratulations on the 68. Rosedal has always been one of my most favourite courses.

Fun to read Michael. Such stunning locations for the Canadian Seniors Golf Association events! Next time make sure get access to a red jacket!
Cheers,
Holly