Opinion: Spain in the membrane: What Vancouver can learn from the Spaniards Vancouver Courier August 13, 2018 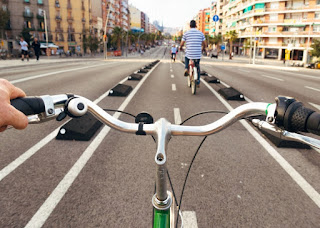 I often enjoy checking to see what I was doing on a particular date in years gone by.

Eight years ago today, I had just completed a trip to Spain that included a house exchange in Begur, a coastal medieval village about an hour and a half from Barcelona. Upon returning home, I prepared a list of ideas, big and small, that might improve Vancouver. Here, in no particular order, are some of the things I noticed.
Parking by the minute
Many Spanish parking garages charge you by the minute, not the hour or half hour. While perhaps not as profitable for the operator, it is much fairer. Vancouver parking meters charge by the minute. Perhaps Impark, EasyPark and other parking lot operators should be encouraged to do so, too.
Cigarette butt holders
For years, I have been upset by Vancouver streets littered with cigarette butts. In Spain, I came across plastic devices that fold into a cone and can be inserted in the beach, or just about anywhere, to collect cigarette butts. Some incorporate advertising. Surely, we can adapt this for Vancouver.
Painted traffic boxes
To avoid blocking traffic, major intersections often have painted boxes that must NEVER be entered by motorists unless the driver is certain he can get out before the light changes. Given the congestion caused by cars often blocking Vancouver intersections, we should start doing this here.
Decorative parking garage doors
Instead of industrial-looking, open metal grill doors, many multi-family developments incorporate decorative garage door designs. This is something most local architects don’t even think about. However, since garage doors are often quite prominent along a street or lane, it would be a good way to beautify Vancouver.
Attractive garbage containers
In Spain, I rarely saw ugly graffiti-covered metal dumpsters like those found along Vancouver streets and lanes. Instead, there are colour coded garbage containers (with provision for recycling) with foot operated covers. Yes, they prevent dumpster diving, but perhaps that’s a good thing too. For those concerned that this would eliminate revenue opportunities for the homeless, I say let's find them other work opportunities.
Raised bicycle lane markers
While many bicycle lanes are completely separated, in some situations a small raised marker is set into the pavement to help discourage cars from intruding into bicycle lanes, and cyclists from intruding into the car lanes. Now why don’t we do this?
Adding floors to existing buildings
Rather than demolish older buildings, it is much more common to add floors to existing buildings. This is an idea I came across in many Asian cities as well. While there are a few instances of adding floors to older buildings in Vancouver, this is an idea worthy of further application. One possibility: using lightweight pre-fabricated modular units hoisted into place.
Pedestrian streets
While we talk about creating more pedestrian streets in Vancouver, throughout Spain they are everywhere, in cities and small towns. For many reasons, we should start doing this in Vancouver and surrounding municipalities. It is not just a “big city” idea.
More public art and decorative fountains
There is a much stronger tradition of public art throughout Spain, when compared to Vancouver. Yes, we are trying, but there is so much more we could be doing. One idea, adding public art in the centre of much-needed traffic roundabouts.
Celebrating architecture
The architecture of Barcelona is one of its key attractions. But when people think of Vancouver, they think of nature — the mountains, the ocean, Stanley Park and, yes, Granville Island. But we too have interesting architecture that should be actively promoted and celebrated.
To be fair, there is much that Spanish cities could learn from Vancouver, especially when it comes to managing graffiti.
Those of you who have been to Spain may have other suggestions to add to my list. I look forward to hearing them.

Posted by Michael Geller at 5:07 PM