Opinion: Is the empty homes tax based on jealousy? Vancouver Courier April 27, 2017 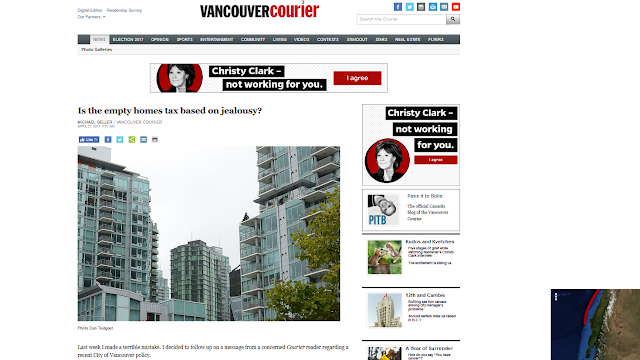 Last week I made a terrible mistake. I decided to follow up on a message from a concerned Courier reader regarding a recent City of Vancouver policy.
Related
This time it wasn’t about two suites in a small duplex building that the city had determined were illegal following a complaint from a neighbour.
Nor was it a complaint from the builder who had been previously told to add a larger bathroom on the main floor of a laneway house since the upstairs bathroom was not accessible to someone in a wheelchair.
Nor was it from the Dunbar resident who was told by city officials that she could not build the size of house she had hoped to build because of new city zoning regulations.
This reader’s concern had to do with the city’s new empty homes tax and its unfair application for those who chose to keep a second home in Vancouver.  Like most Vancouver homeowners, she had received a flyer from the city asking, “Do you own an empty or occasionally-used home in Vancouver?”  It added, “If your property is not a principal residence, eligible for an exemption, or rented out for at least six months, it will be subject to the Empty Homes Tax.”
This reader had owned a small, second home in Vancouver for years. She and her husband used it whenever they came into the city for a night out or to visit children and grandchildren. They also stayed there whenever they came into Vancouver for medical reasons. They also made the apartment available to family and friends visiting Vancouver.
She told me she had contacted me because of an earlier Courier column I had written about the plight of a well-to-do Florida resident who complained that because he only used his apartment five months a year, he might have to pay an ‘Empty Homes Tax equal to one per cent of the assessed value. This was more than three times his annual property taxes that he happily paid even though he didn’t send children to our schools or place demands on municipal services.
However, he was not at all happy about this tax. Nor was this other reader. She wondered why the city would impose a penalty on someone who owns a home which was not vacant, and impossible to rent on those days and weeks when it was not being used. How was this going to add to the available rental stock, she wanted to know.
I told her to contact the city and she said she did. However, the only person who responded was Elizabeth Ball who told her she didn’t vote in favour of the tax. She also told me she was not alone. She was aware of many others who had kept second homes in Vancouver for years, so they could continue to enjoy the city after moving away to the interior, or in her case Tsawwassen.
I had to agree with her concerns. While I have publicly questioned the appropriateness and likely effectiveness of this tax as it related to truly empty accommodations, for the life of me I couldn’t understand why the city would tax a home that is being used.
Unless of course it wanted to show some empathy with those who are struggling to afford to buy or rent just one home.
I decided to go to bat for her and everyone else who owned a second home in Vancouver and was troubled by this very unfair tax by writing an op-ed in the Vancouver Sun. I also linked it to my Facebook and Twitter accounts. What a mistake.
While I did receive some thanks and compliments on the column, they were grossly outnumbered by those who wondered why I would side with those who owned two homes in a city with a severe housing crisis.  Did I not care about them? Who paid me to write this?
The fact is, no one paid me to write the column. I just thought it was important to speak out against a tax that seems to be based more on jealousy, as one of my Facebook friends put it, than a genuine attempt to increase the supply of rental housing.

To those who don’t own a second home, let me conclude by asking, do you have an unoccupied suite in your house, or an empty bedroom?

People who own a second home that they use occasionally but regularly and at their leisure is their prerogative and their right. They should not be told what to do regarding the occupancy of their second home, nor should they be taxed. The City of Vancouver is a backwards town, and this clearly demonstrates it.

And your comment about unused bedrooms and basement suites is hilarious. It also shows the ridiculousness of this tax. How about, "let's make all property owners build laneway houses or they will be taxed for not fully using every square metre of their land."

What you have shared is very valuable and helpful. All the information you have shared gives me more insights on this. Thank you for sharing. Keep it up! Would like to see more updates from you soon.

จีคลับcasino online no.1 in thailand