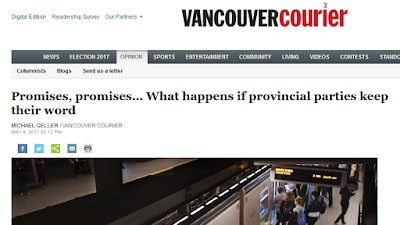 Well, the election is over.
As I write this column, the outcome is not known. However, whichever party has won will have significant challenges ahead when it comes to addressing housing affordability and transportation issues across the Lower Mainland.
Let’s look at promises from the three major parties.
Prior to the election, the Liberals announced a number of new housing programs, but made no further promises during the campaign. Programs included a 15-per-cent foreign buyers’ tax on housing purchases; interest-free loans of up to $37,500 for first-time home buyers of properties below $750,000, and a commitment of approximately $1-billion towards building affordable social housing around the province.
The province also adjusted the Property Transfer Tax (PTT), reducing it for lower priced homes, and increasing it for homes priced over $2 million.
What the Liberals should have promised was to revise the provincial Homeowner Grant program so that money goes to those in greatest need. After all, does the owner of a $1.6 million home in Castlegar or Merritt really need a provincial subsidy?
The Liberals should have also promised to improve the Property Tax Deferral Program. While I, and many others who can well afford to pay property taxes happily take advantage of the program’s extremely low interest rates, this money could be much better spent if the program was means-tested.
Regardless of who won the election, I hope these programs will be reconsidered.
Over the past few years, Christy Clark and her ministers repeatedly said they wanted municipalities to improve their project approval systems to speed up supply, and increase development densities around transit stations.
While some mayors told the province to get out of their sandbox, I hope the province does follow through since development approval delays add significantly to housing costs.


During the election campaign, the NDP said it would fund 114,000 new units of affordable housing a year over 10 years, to be developed in partnership with municipalities and non-profits. At an average cost of $300,000 per unit, this equates to $34.2 billion.
If the NDP has won, while some of this cost can be covered by mortgages, depending on the rents to be charged this could be an extremely expensive proposition. It needs to be rethought.
The NDP also promised a $400-a-year grant to renters to give them something akin to a homeowner grant.  As noted above, the homeowner grant is not means-tested, and if this grant program proceeds, hopefully the grant money will go to those who are truly in need.
The NDP also promised more protections for renters, including removal of the current “fixed-term lease” provision. Regardless of who has won, I hope this loophole will be addressed.
The NDP also said it would introduce a “yearly absentee speculators’ tax” of two per cent of assessed property value. While few details were offered, if the NDP has won and this tax proceeds, I hope it will be better designed than the City of Vancouver’s Empty Home Tax, which unfairly penalizes those owning second homes in Vancouver, and not likely to produce the results promised.
The Green Party proposed numerous measures to eliminate money laundering and international property speculation in the BC residential real estate market. These included a sliding scale of Property Transfer Tax rates from 0% on properties under $200,000 to 12% on properties over $3.0 million.
It also proposed a “speculation” PTT to discourage flipping of property; expanding the foreign buyers tax to apply across the province, and increasing the rate to 30% in addition to the PTT payable.
In what would have been a hugely unpopular move, it wanted to introduce measures to tax lifetime capital gains in excess of $750,000 on principal residences.
While I am quite sure the Green Party did not win the election, and question many of its promises, I do agree that those who assign pre-sale purchase contracts, or flip properties for a profit, should be paying their fair share of tax.
When it comes to public transportation, the NDP said there would not need to be another transit referendum. The Liberals promised another Referendum for any funding mechanisms other than property taxes.
If the Liberals have won, I do hope this is one promise they don’t keep.
Twitter @michaelgeller


Wonderful blog.. Thanks for sharing informative Post. Its very useful to me.