For the past few years, I have enjoyed presenting SFU evening lectures on topics that interest me, and are hopefully of interest to others. 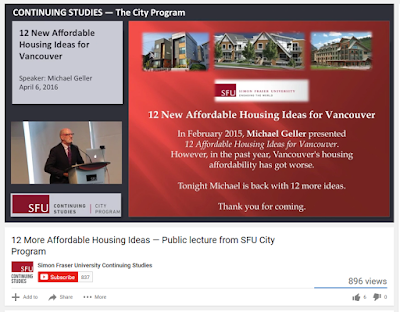 In 2015 and 2016, I offered 12 affordable housing ideas and 12 new affordable housing ideas http://www.video2017hd.com/24858.html and https://www.youtube.com/watch?v=QLkkYaMnqRM
and I will be delivering another talk on this topic on April 4th 2017. (that will make 36 ideas!)
A 2008 lecture presented lessons for Vancouver from around the world following my around-the-world sabbatical (Michael Geller's Planet) http://www.sfu.ca/continuing-studies/about/program-units/city-program/resources/videos/michael-gellers-planet-lessons-for-vancouver-from-around-the-world.html 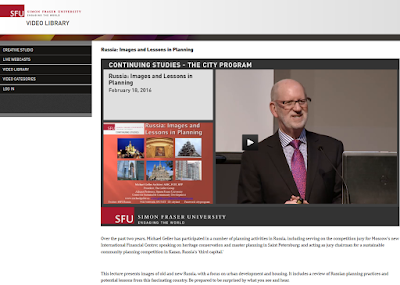 Last year I also took the audience to Russia, where I have been working on a number of projects https://www.sfu.ca/video-library/video/1537/view.html
For the last five years I have travelled around Europe, looking at various housing developments and new communities. I have often been struck by the fact that while Vancouver tends to build high-rises, European cities tend to build more higher density low and mid-rise housing. This prompted last week's lecture that presented housing projects in Netherlands, Germany, France and Denmark. I can't watch this, but you might want to. Pour yourself a large drink first. Here's the link https://youtu.be/v5vZe3R2fL0 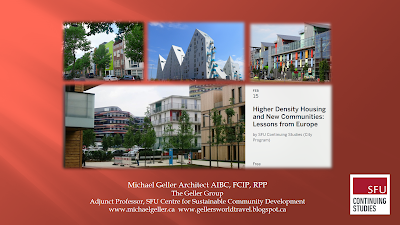 My key message was while I believe there is most definitely a place for high-rise development, Vancouver should learn from the Europeans and introduce more mid-rise development, similar to what we are now seeing along Cambie street and in some of the new 6 storey wood frame buildings. Hopefully municipal planners and politicians will rezone some of the single family properties along arterials, and just behind arterials so that we an increase the supply of this type of housing and in turn hopefully moderate house prices.
In addition to smaller apartment buildings, we need to create more 'fee-simple' individually owned rowhouses. This is one of the most generic forms of housing in the world, but for some reason not being built in Vancouver, although some units are being built in Coquitlam and other suburban municipalities.
A local on-line publication The Source did an interview with me about the talk. http://thelasource.com/en/2017/02/06/bringing-european-concepts-of-architecture-to-vancouver/ 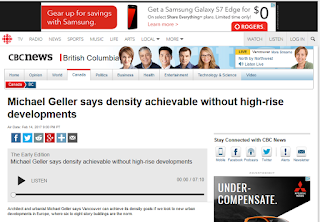 Prior to giving the lecture, CBC kindly invited me to chat with Rick Cluff on the Early Edition and following the interview posted a summary of our discussion and some pictures on their website. If you are interested, the 7 minute interview can be listened to here http://www.cbc.ca/news/canada/british-columbia/density-without-towers-vancouver-architect-says-yes-1.3982385 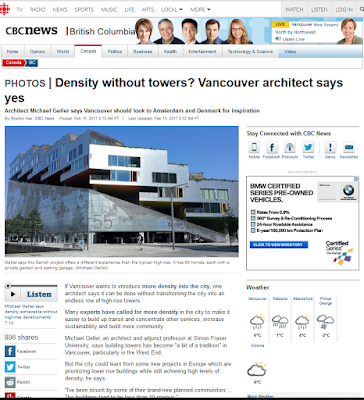 Some of the images from the talk can be found below: 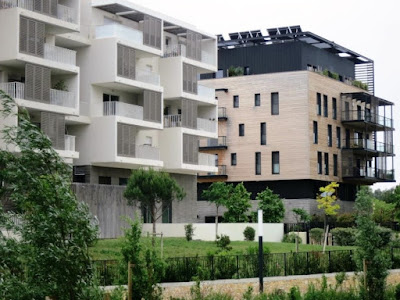 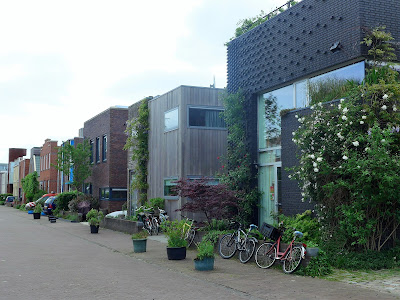 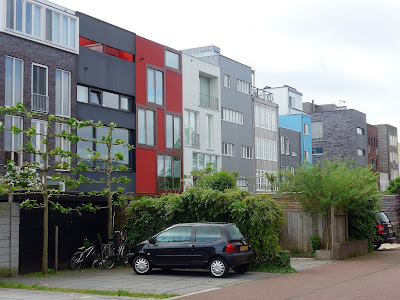 Posted by Michael Geller at 9:01 AM