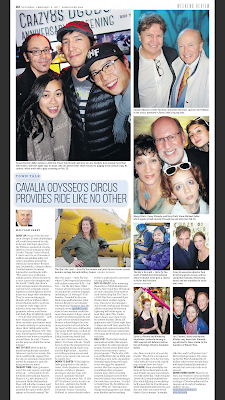 I woke up Saturday morning to find a photo of myself in Mac Parry's column on page B2 of the Vancouver Sun. Malcolm had kindly included it along with an item about the SFU talk I am presenting on February 15 which will look at European examples of higher density living.
If I look a bit younger, that's because it wasn't a recent photo. It was taken at the 2008 Arts Umbrella Splash when I was running for Vancouver City Council.
With me are two Arts Umbrella students and Margot Paris, my campaign manager who was wearing a pair of scissors as a necklace. At the time she told anyone who asked it was to highlight the fact that if elected, I would cut red tape at city hall. Subsequently she told me it was her woeful lack of fancy jewelry that necessitated a rummage in her sewing box for the perfect sea aqua accessory.           Those who know Margot will tell you that's typical Margot. Thinking outside the box. Those who don't know Margot are missing one of the most creative minds in the city. Married to another creative soul, Chuck Brook. They now live in the south of France half the year.
Often when my photo appears in the newspaper I'm reminded of the early 1990s when I was managing the rezoning of Langara Gardens for Morris Wosk of blessed memory. Council had approved 83 new rental apartments in Tower 4 but with staff support, we were then seeking approval for three more rental towers.
Unfortunately, one of the new towers would block the bedroom view of Mount Baker for one of the senior city planners, who helped organize neighourhood opposition to the project. Really!
Eventually Gordon Campbell (wrongly I might add) announced he would not even allow the project to go to Public Hearing.
I have never quite forgiven Gordon for that, especially since I subsequently learned at Jack Poole's funeral it wasn't the neighbourhood outburst that killed the project, but rather something entirely different. Jack's VLC Properties was in negotiation with the city on leasing city lands to build rental housing, since no private developer would build rental units. And here was Morris Wosk offering to build 350 apartments without any government subsidies. It didn't look good. 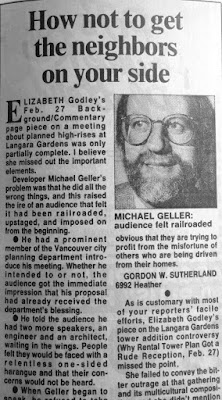 At any rate, after the Council decision, one of the neighbours wrote a letter to the editor who included my photo. Sally was upset since normally letters to the editor do not include photos.
"Did they have to use your photo?" she asked in front of our daughter Georgia.
From then on, every time my photo appeared in subsequent newspapers, young Georgia would ask "Is it bad again, daddy?"
Posted by Michael Geller at 6:51 AM