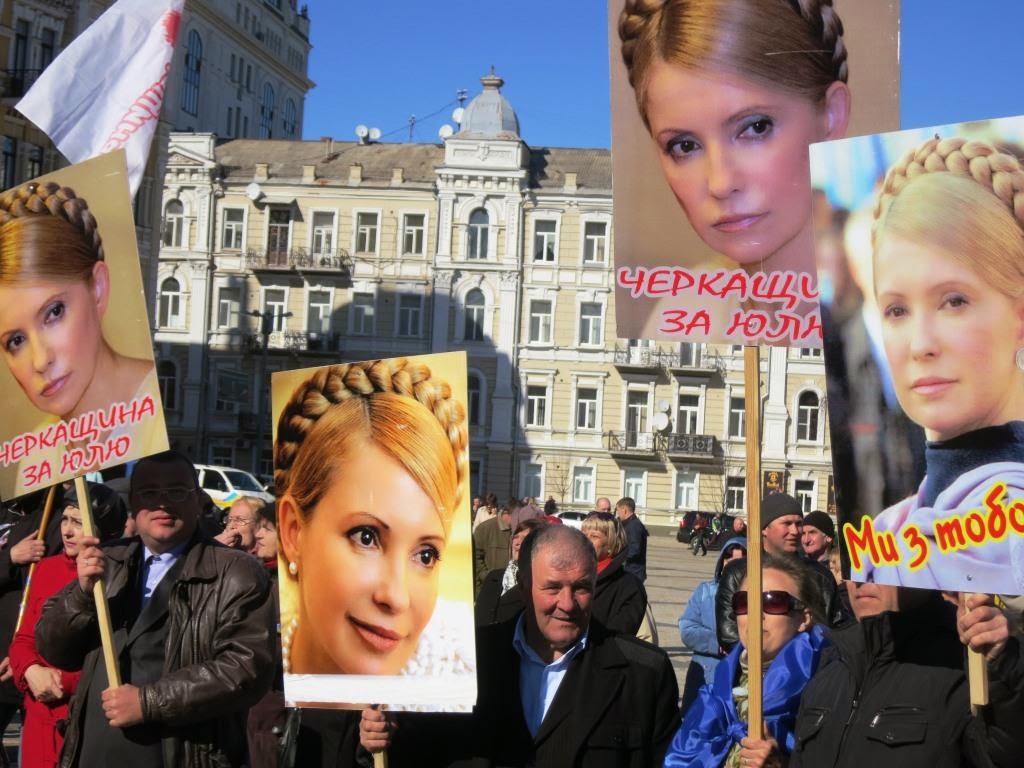 On April 7 & 8 my final jury session for the Moscow International Financial Centre competition is scheduled. www.mfc-city.com Initially I thought I would return to Sochi before the meetings and possibly explore nearby Georgia and Azerbaijan. However, I was unable to arrange my Azerbaijan visa before leaving Canada, and there was some question whether a foreigner could travel by boat from Sochi to Georgia at the present time.

Seeing pictures of Kiev on The National Tuesday evening, and since Ukraine has been so prominent in the news lately, I decided to book a last minute flight to Kiev. Although Sally and I flew through Kiev en route to Moscow in 2007, I had not been to the Ukraine since 1994 when I visited Odessa and Yalta with my father. We went there together since his father and many other relatives were born in the Ukraine.

I must admit I had second thoughts about the idea when the lady seated near me on the flight from Frankfurt to Moscow questioned the wisdom of visiting Ukraine at this time. She was from Kiev and worried whether it would be safe. Then the ticket agent in Moscow cautioned me. When I asked her why I shouldn't go, she said because there was a war!
Not having been to Kiev before I did what I often do....I went on Tripadvisor and chose the #1 rated hotel despite its somewhat unusual name 11 Mirrors Design Hotel. http://www.11mirrors-hotel.com/ Upon arriving at the hotel, I was very pleased I had chosen it. 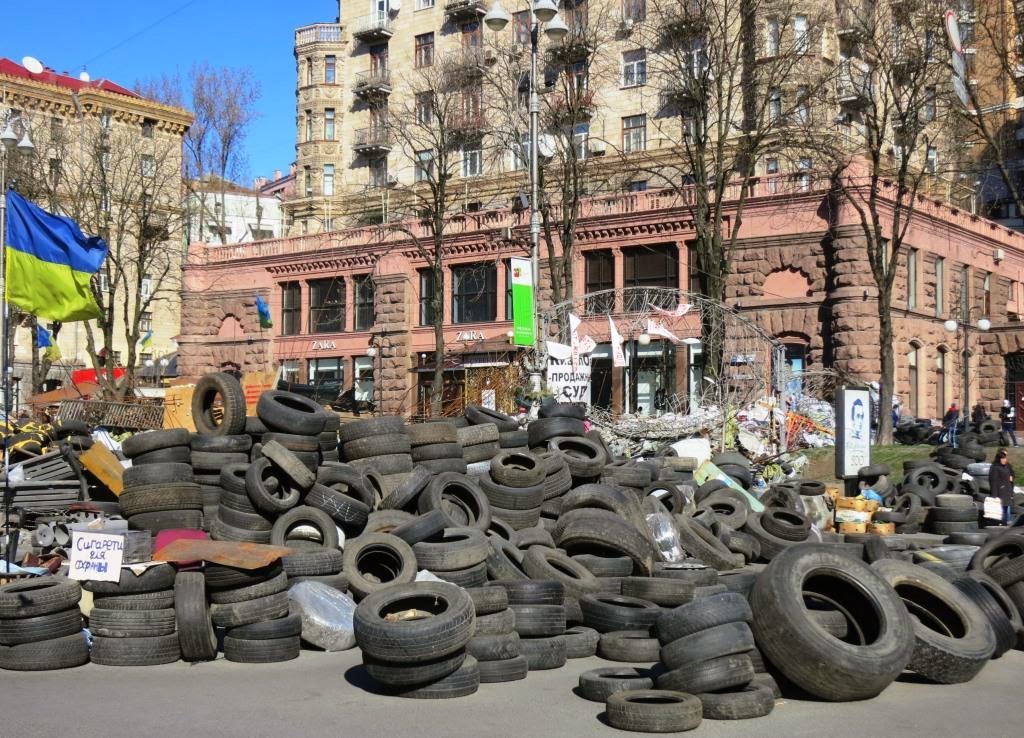 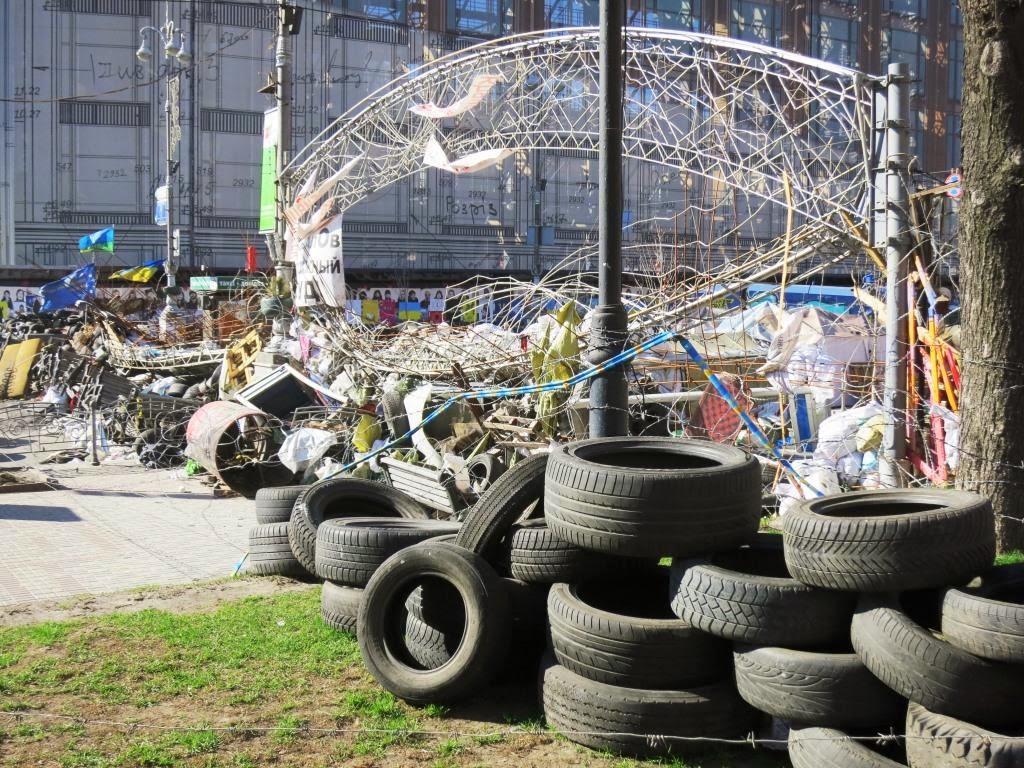 My first impressions of Kiev were mixed. On one hand, the road in from the airport was impressive. However, as we drove through the city centre, I was disturbed to see a portion of the city blocked off by piles of tires and barbed wire.

The hotel reception staff were exceptionally warm and friendly. While I was checking in I met another guest, a German fellow who told me he was staying in the hotel since he had recently been appointed to a position in the nearby German embassy. That evening we went for a drink and so began my education about political life in Kiev these days.

The next day my education continued when over breakfast he invited me to join him at an event in a nearby square where Yulia Tymoshenko was to be acclaimed as her party's Presidential candidate for the forthcoming election. Apparently she will not be the front runner; that will be Ukraine's so-called 'chocolate king' Petro Poroshenko. Coincidentally, at the time another front runner was boxer-turned-politician Vitali Klitschko, who was having breakfast next to us in the hotel. However later that day he announced he will not be running for President. Instead he has put his support behind Poroshenko and will instead run for mayor of Kiev! 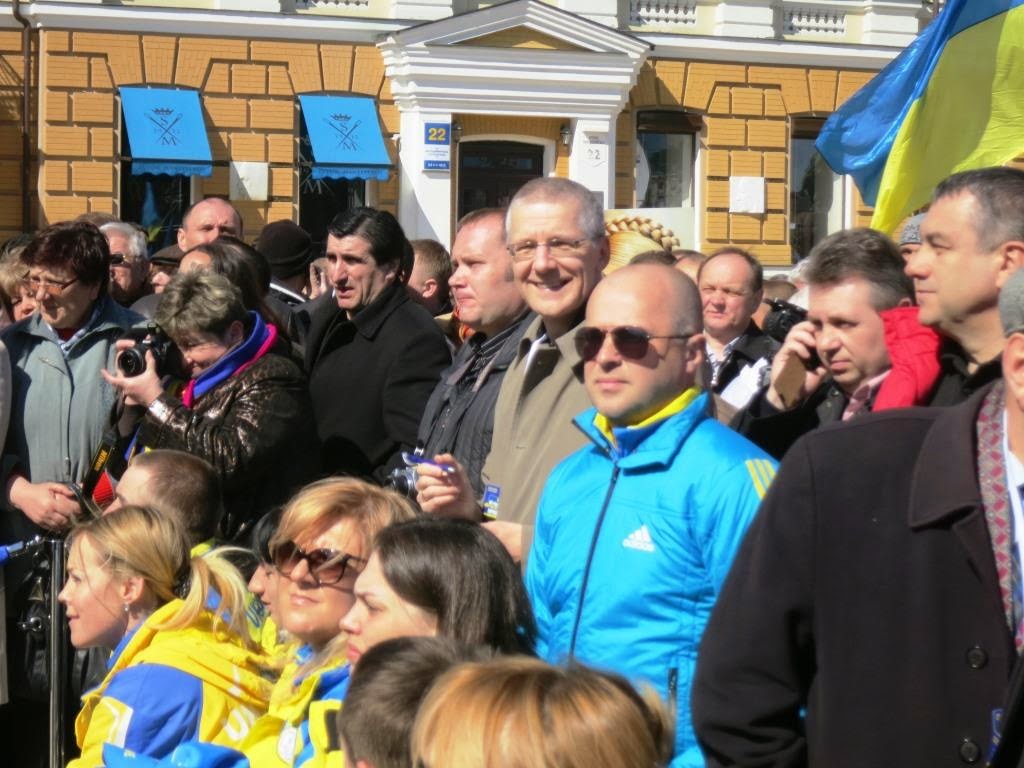 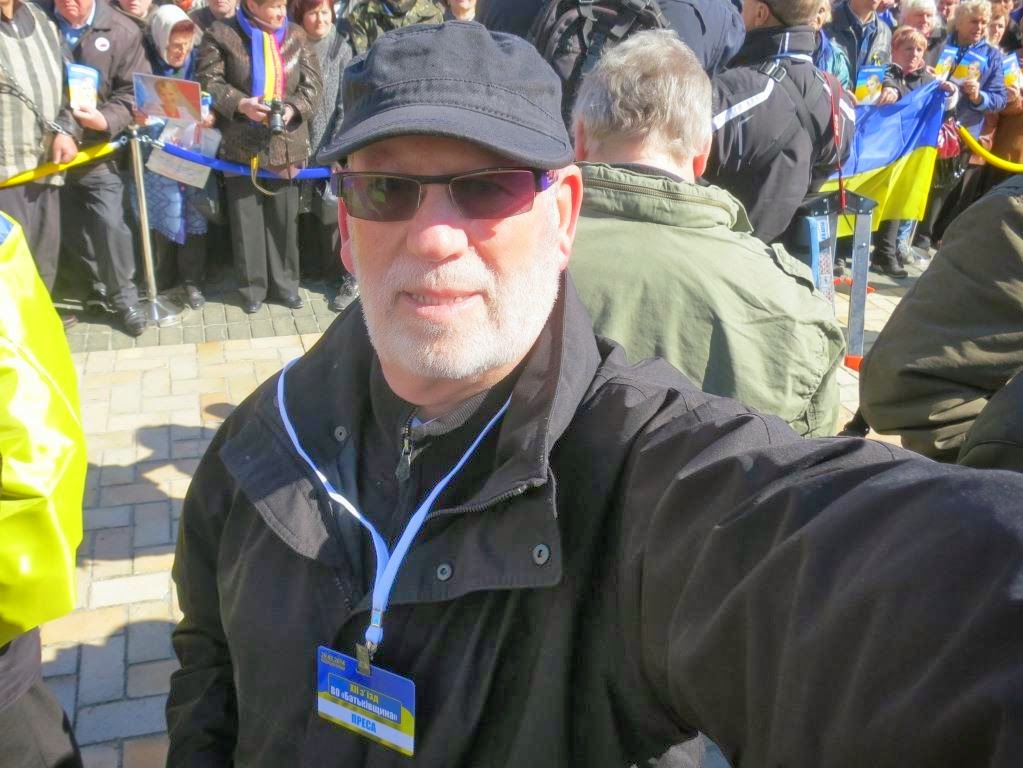 As a representative of the German embassy my new acquaintance had delegate status which allowed him special access. Wanting to stay with him, I managed to arrange media accreditation, and we both were escorted into a roped-off area close to the stage. 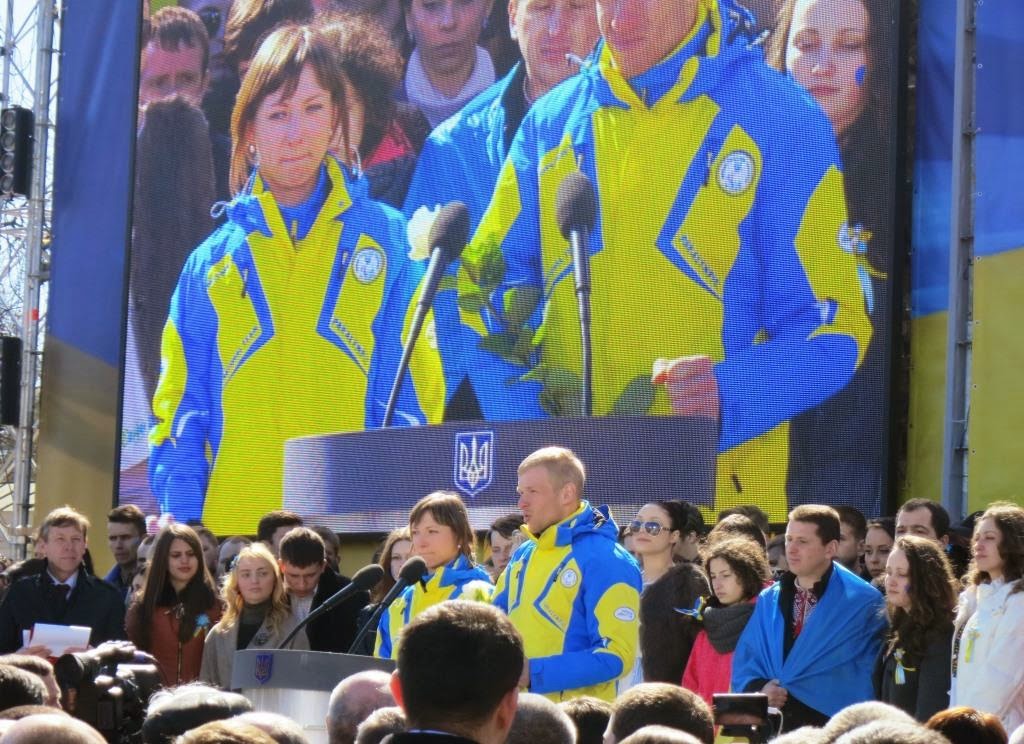 Seated directly in front were members of the Ukraine paralympic team. I wondered whether this was somehow connected to the fact that when Yulia was released from prison she was in a wheelchair. 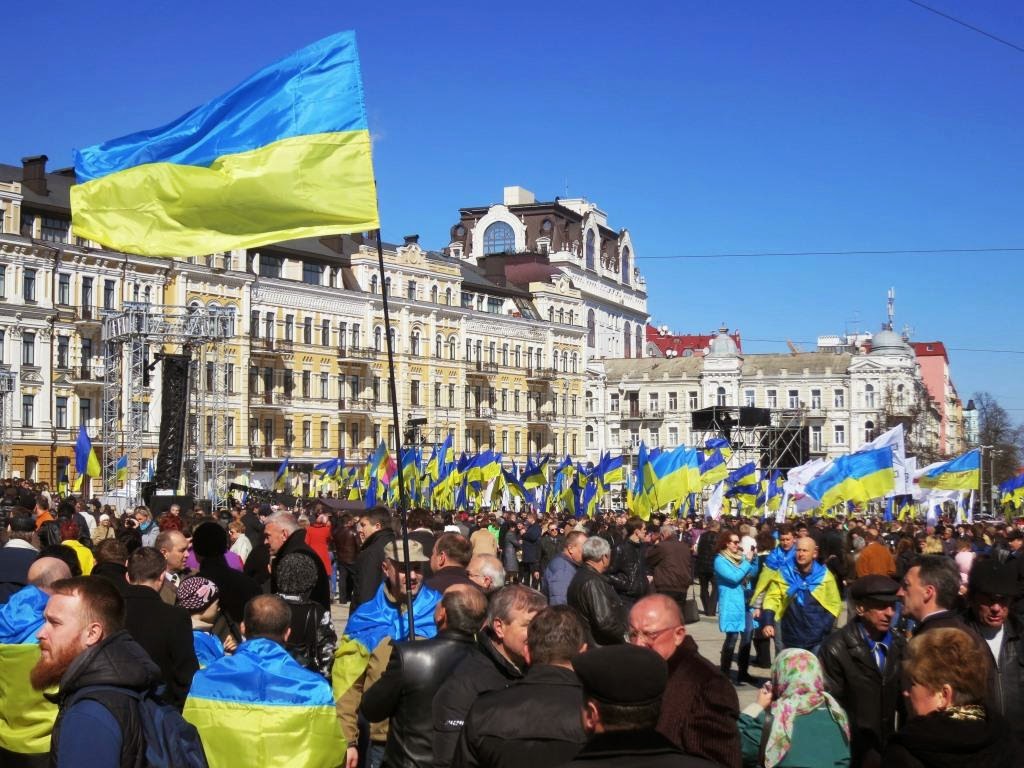 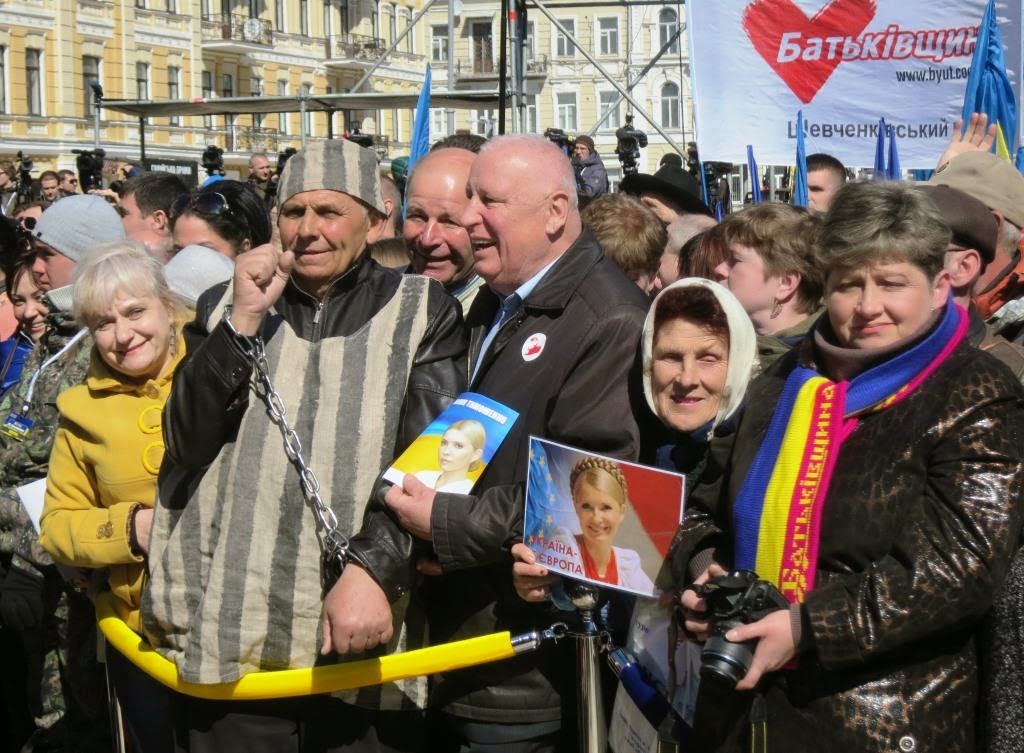 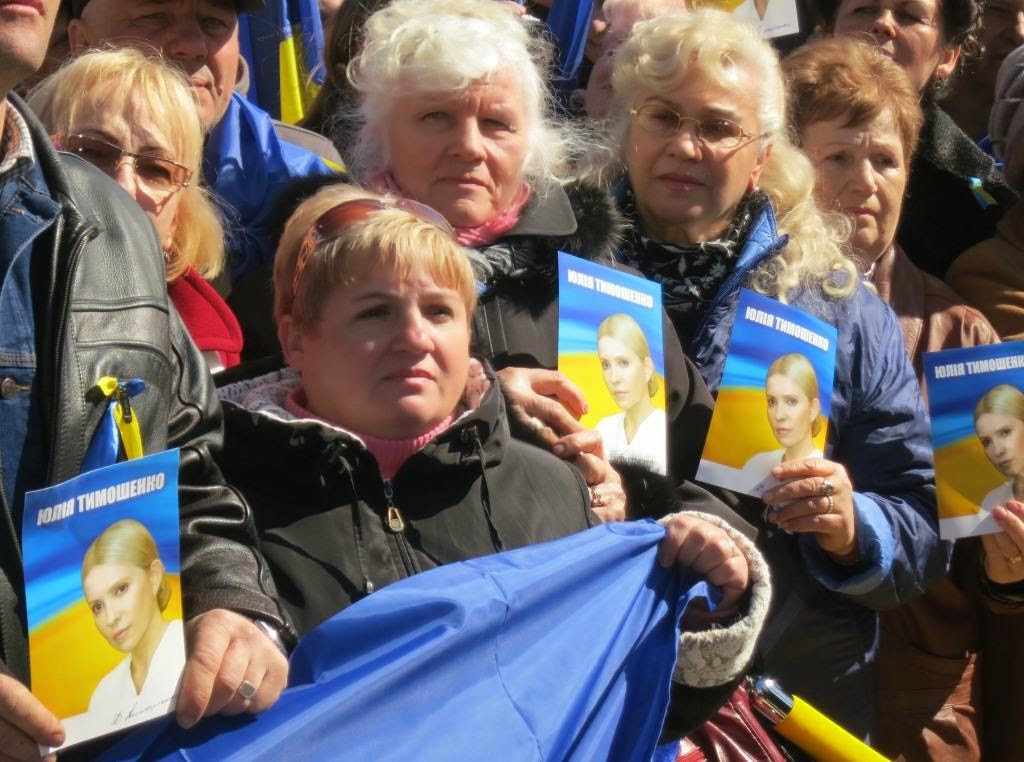 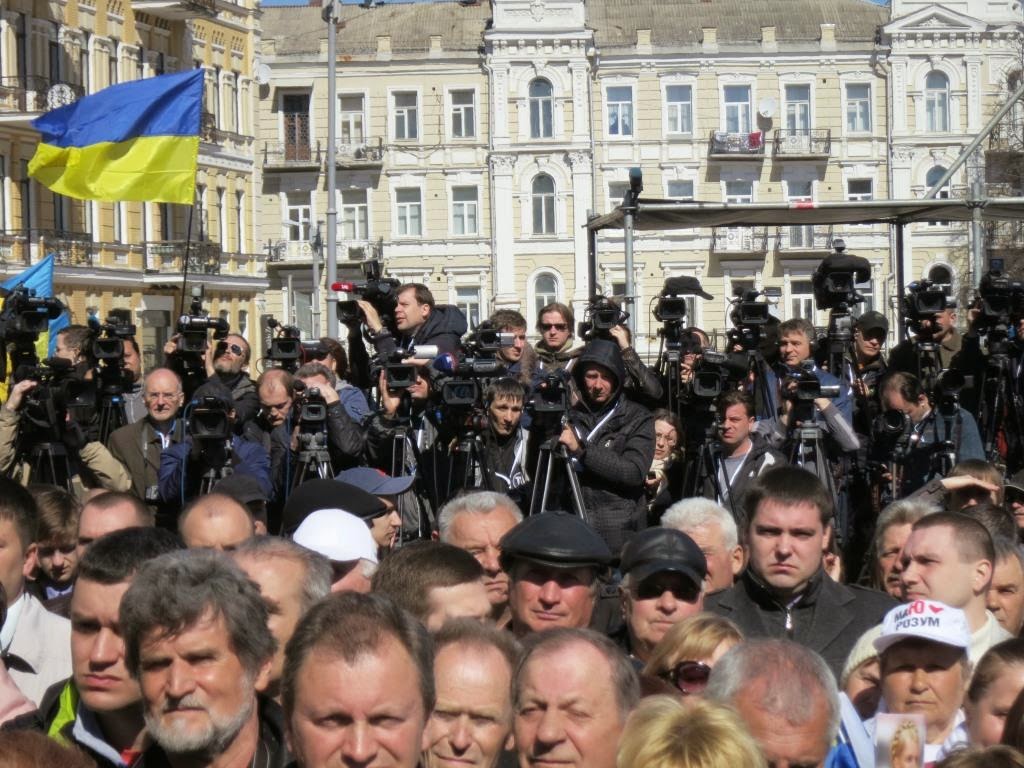 Behind us was a large crowd and the largest phalanx of photographers I had ever seen. I must confess that having arrived in the country only 18  hours earlier, I was astonished to find myself so immersed in the Ukrainian Presidential campaign!
The introductory speeches lasted an hour and a half. I could only understand two in English; one by the vice-president of Slovenia who, like Yulia, had been imprisoned for political reasons, and one by a representative of a democracy organization founded by Ronald Reagan and Margaret Thatcher. I was surprised to see another of the speakers, the former President of Georgia, who was also staying in our hotel! (When I next see him in the elevator I'll have to ask whether I can in fact travel from Sochi to Batumi!)

The country's Prime Minister also spoke. Even though I didn't understand a word he said, he struck me as a very thoughtful, reasonable man, with a very tough job ahead!

I was fascinated by Yulia Tymoshenko. 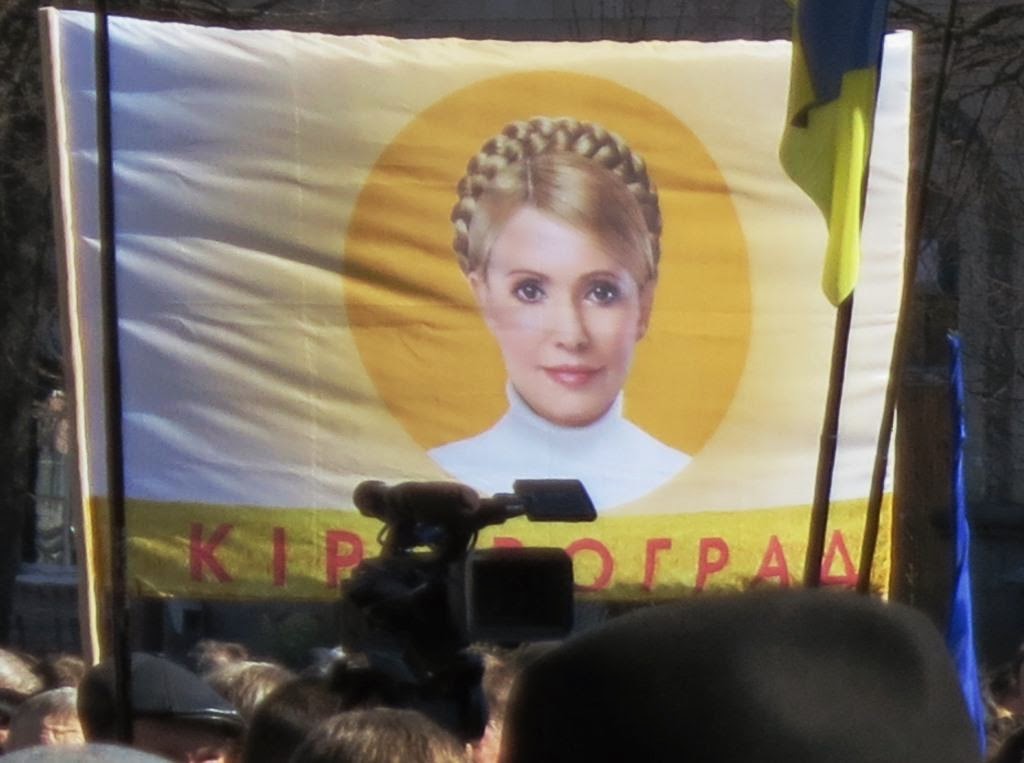 While her Ukrainian peasant braid was gone, as I posted on Twitter much to the derision of many, (including some prominent Vancouver Visionistas), she initially came across like a sweet young woman. While I knew a bit about her....that she had led the Orange Revolution and had been imprisoned by the opposition Prime Minister and had been recently released, what I didn't know was that this 'sweet young woman' is in fact 54 and before entering politics was known as the 'gas princess' and one of the country's wealthiest people! She is indeed a very controversial figure in Ukraine. 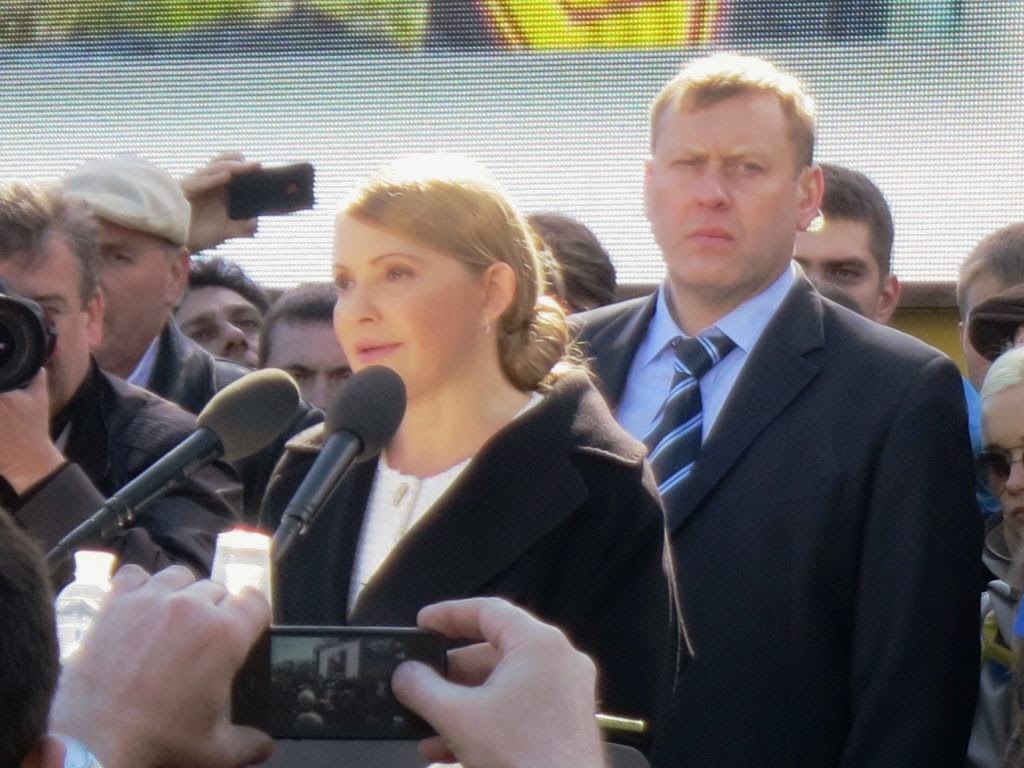 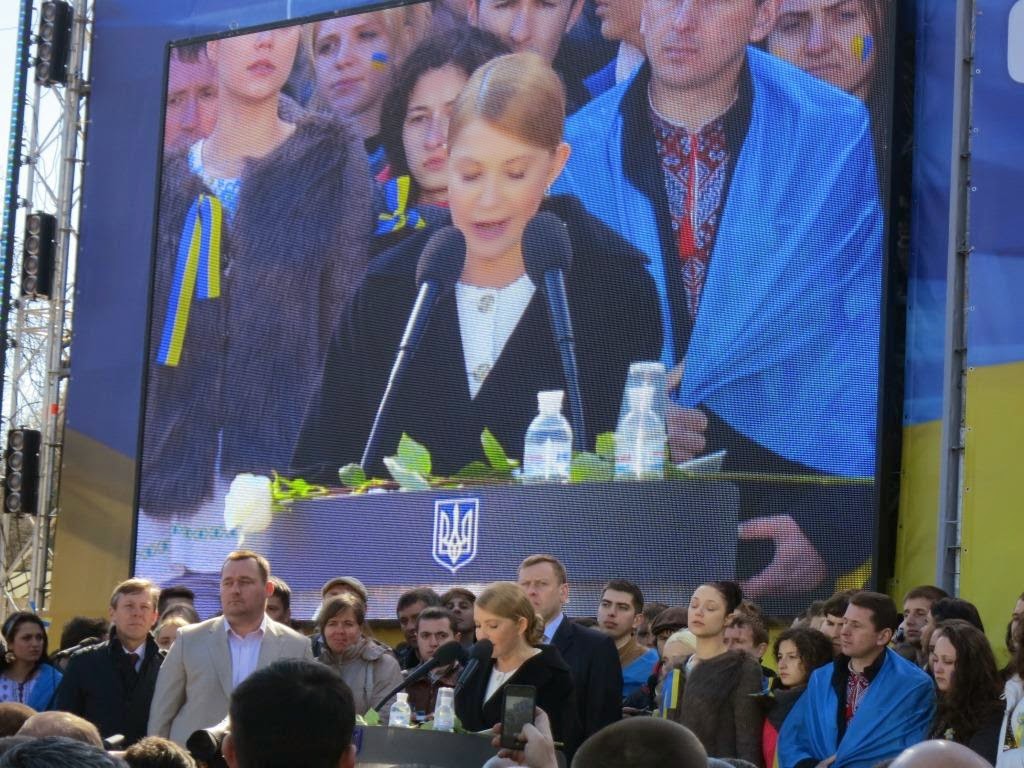 Unfortunately, given the circumstances, she spoke for what I thought was much too long...well over an hour; and as the sun set behind the nearby church it became very cold and uncomfortable. We had all been standing for 2 1/2 hours, and as others slowly left the area, I too set off to explore the city. 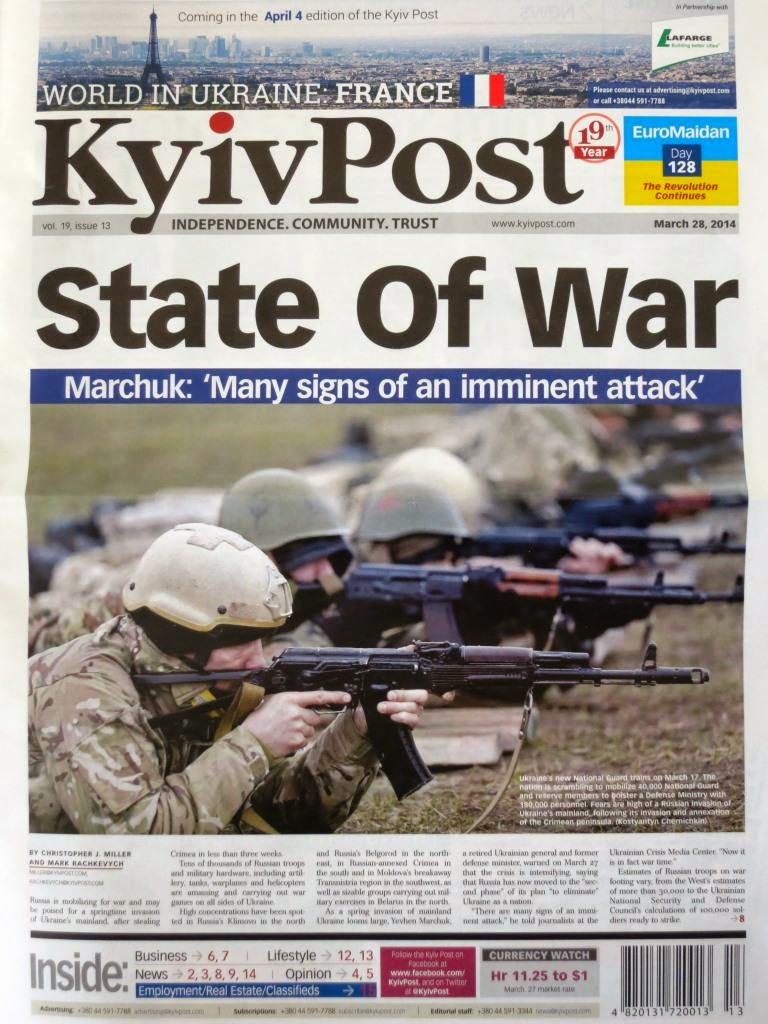 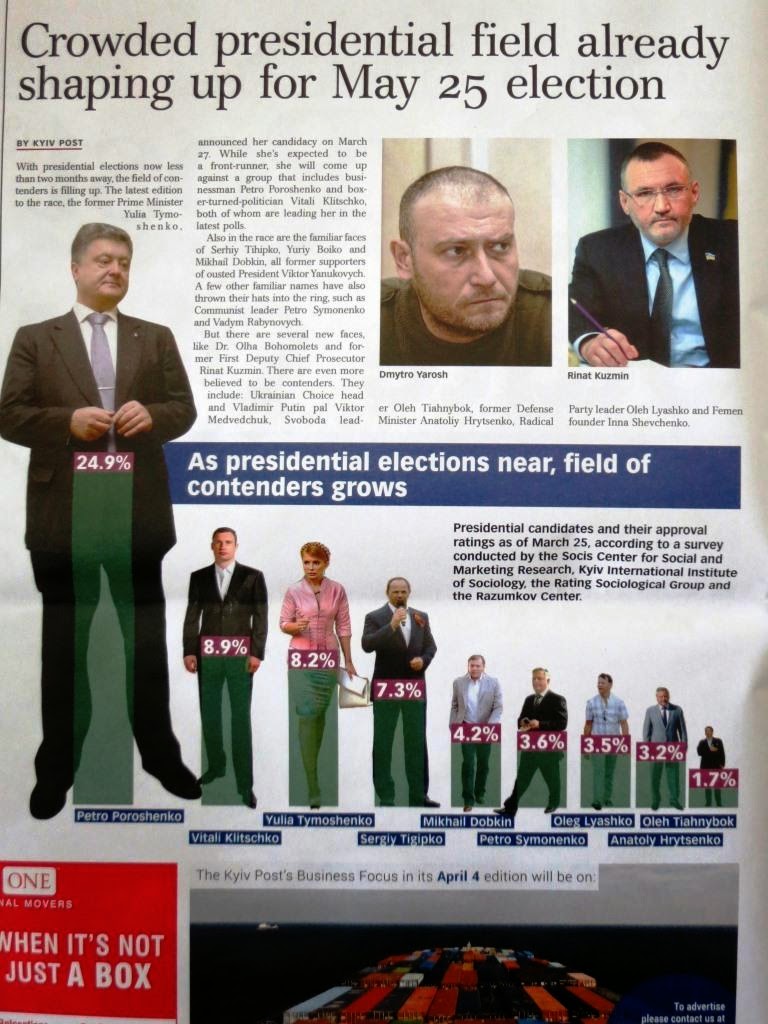 That evening I came across a copy of the Kyiv Post, a local English language newspaper. While I knew the news about the candidates was already out of date, I was not so sure about the headline. However, I showed it to the hotel staff who assured me that it too was out of date. They had heard the Russian troops were no longer mobilizing as reported.

At least, let's hope that's the case. You probably know more than I do! While I did not like the newspaper headline, I did like these cartoons! 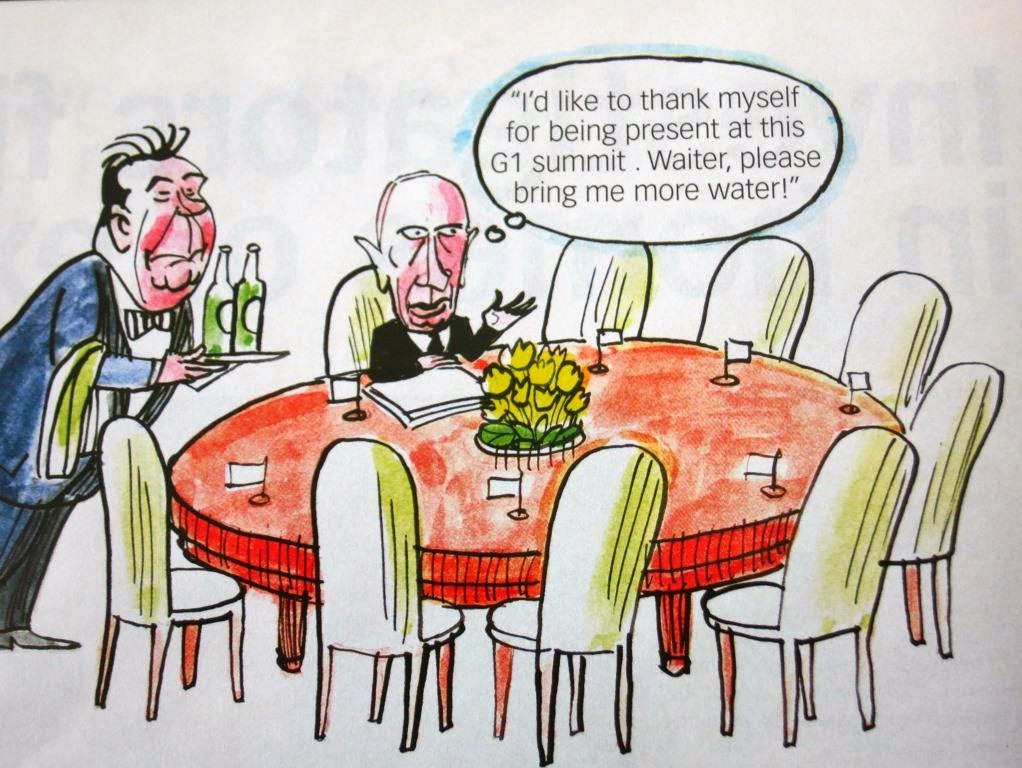 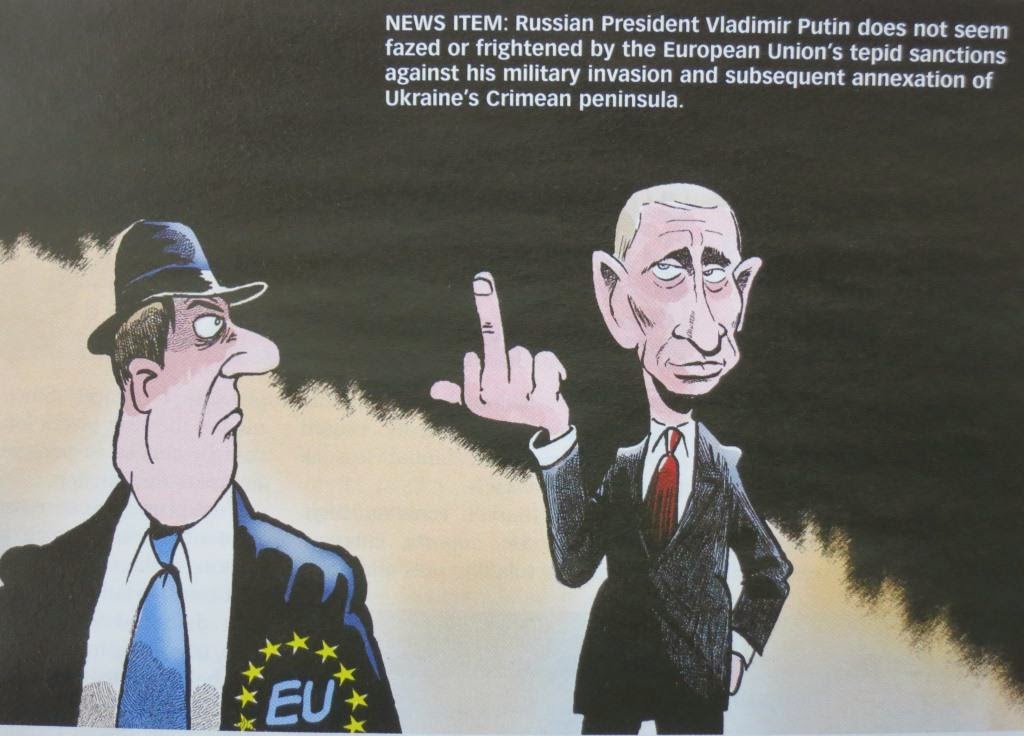 Posted by Michael Geller at 2:39 PM

What an adventure, Michael, to be in the middle of all that. John

Thought Of The Day

"Our man in Kiev and Moscow... in the middle of all this... kerfuffle."

Since I've asked you to say "hi" to Yanukovich when you see him in Moscow, and specifically asked to stay away from Tymoshenko(she's nuts)people start asking me dumb questions like "Why is Michael there, no really, and a member of the Press... is he covert?"
I said to them: " Why do you ask me? What kind of question is that? Am I Five? Am I Six? Dunno. See ya, eh!?"

Regardless, I think your blog piece is really lovely, and it shows that the Ukrainians don't really know what hit them. And I'm not talking about Putin here.

When the dust will settle over all this, all these 'marks' gathered in Kiev's main plaza to worship the Western puppets like Yats and Yulia, will realize, too late that is, that their future is already in the hands of some foreign IMF bankers.