What happens when an irresistable force meets an immovable object?

I thought of this classic paradox when I read about a rezoning application going to Public Hearing this Tuesday October 22, at 6pm.
While I may be out of town and unable to attend, if I am here I intend to address Council on this proposal since I fear Vancouver City Council and the planning department may be ruining the DTES with their good intentions.  Let me explain.

Atira, a very caring non-profit development group, is seeking a rezoning to develop a new building with a mix of 60% social housing and 40% rental housing on the former United We Can site at 33 East Hastings. Great you say. The site has been a bit of an eyesore for many, and there's a need for social housing and rental housing in the neighbourhood. Atira, led by Janice Abbott wants to do good and has done good in the past.

The architect is Perkins and Will (formerly Busby Associates) a highly regarded firm of architects. For three decades I have been a friend of Peter Busby and an admirer of much of his firm's work. So what's my problem?

I have two main problems. Firstly, I think the building, at 14 storeys and an 8.1 FSR is too big for this heritage frontage along Hastings.  You can find the rezoning package here:http://former.vancouver.ca/commsvcs/planning/rezoning/applications/33-41ehastings/index.htm 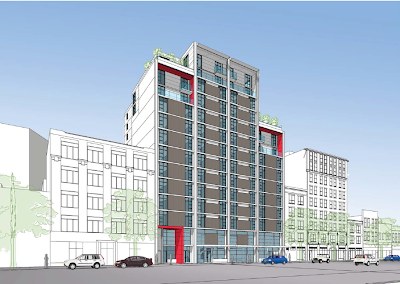 The links to other renderings are  here.  I will let you also be the judge as to whether I am right with this concern.
http://former.vancouver.ca/commsvcs/planning/rezoning/applications/33-41ehastings/documents/elevs.pdf
http://former.vancouver.ca/commsvcs/planning/rezoning/applications/33-41ehastings/documents/renderings.pdf

Secondly, I worry that if this building, with its mix of 60% social housing and 40% market rental housing, is approved, it may become Council's prototype for the future DEOD. This is the Downtown Eastside Oppenheimer District portion of the city which comprises a 40 block area of what many consider to be the heart of the Downtown Eastside.  I have written about this concern in previous posts and in a Vancouver Sun op-editorial. http://www.gellersworldtravel.blogspot.ca/2013/10/my-vancouver-sun-op-ed-criticizing-city.html

The report from staff notes that the building is slightly over the maximum permitted height of 120 feet and a 60% increase over the permitted FSR. They note the applicant claims a building of this size is required if it is to comprise 60% social housing and 40% rental. (I should add that in this particular case, the rental housing may be converted to ownership housing in 15 years.)

Now, some might question why I, a longstanding proponent of taller and denser buildings, should be worried another proponent's building height and bulk?

I do so because I think the building, and the 120 foot discretionary height limit established for this heritage strip is inappropriate. I would add that the building's overwhelming scale is exacerbated by the proposed 8.1 FSR which is 60% larger than the 5 FSR, (which is a very significant FSR) established for the area.

While I think the building is too large for its site, in this case, I will reluctantly side with the irresistible force (Atira's proposal).  I have told this to Janice Abbott. I do so on the grounds that the application has been in process for a considerable amount of time, with the support of staff and the Urban Design Panel, (although I would welcome the opportunity to debate with the panel whether this really is a good urban design for this particular heritage streetscape.)  Moreover, the staff report notes the project may have funding from BC Housing (not surprisingly to some) and the Street-to-home Foundation. It will fulfill an important need in the community.

However, I do hope that Council's approval of the project, (and it will be approved), will not mean this shall be the model for the future of this neighbourhood. While there is a need to improve or replace the disgusting SRO accommodation in the area, there is also a need to regenerate the area with a broader mix of housing, including ownership housing, in building forms that really respect and complement the heritage character of the area.

Finally, in writing this post, I hope other architects, planners, housing experts and commentators will take a look at this and other forthcoming proposals for the DTES.

I would also urge more people who care about this neighbourhood to study the well-reasoned submission by a coalition of inner city organizations which I previously posted on my blog  http://www.gellersworldtravel.blogspot.ca/2013/10/the-future-of-dtes-submission-of-inner.html which makes an excellent case for a broader mix in the neighbourhood, and an emphasis on mid-rise, rather than high-rise buildings in this heritage area. (A 14 storey building is NOT a mid-rise, in my professional opinion.)

As I wrote earlier, I worry that a further concentration of social housing and rental only housing will reinforce this area as a ghetto. I don't think this is fair to the many residents who live there, especially those who are not on welfare or other forms of social assistance, and I don't think it is right for the city as a whole.

I would welcome your thoughts. You can post here, or email me geller@sfu.ca.  Thank you to those who read this far!
Posted by Michael Geller at 7:52 AM

I am utterly impressed with Janice Abbott's ability to build new housing stock at affordable rates for those most in need. She’s proven over and over again her ability to get things done where others haven’t.

This latest proposal is ambitious in so many ways. From an urban design point of view, I agree with you that the scale and density are too large for the neighborhood. From an economic point of view, however, I wonder whether it’s exactly the right size to make the project feasible. I have no information to support this one way or another, but I know from experience that sometimes the numbers force the design to be bigger, rather than better.

I share your concern that this project will become the precedent for a new DEOD zoning bylaw. I strongly disagree with the proposed DEOD area plan that limits housing types to social housing and rental housing. It’s a grave mistake. These restrictions would unreasonably limit the neighborhood's ability to mature in a balanced way. Worse, new projects would be completely unattainable if senior government can’t commit to supplying adequate capital and operational grants and other subsidies necessary to make the social housing component work. Rich Coleman has already signaled that his ministry will provide increasingly less capital for projects and increasingly more subsidies for living allowances. That will help people find reasonable rental accommodations throughout the City but it will severely limit the development of new social housing projects.

The DEOD area plan seems ill-conceived and based more on optimism and good intentions than on practical and political reality. I hope the City reconsiders their restrictions and at least opens the door to considering other affordable housing alternatives.

Dan, I worried all day whether I should have even writen this blog posting. But your thoughtful response makes it seem worthwhile to continue the discussion. Thanks

What matters is that we are discussing this. I'd be sorry to live in a city where no one voices opinions about important construction projects with social, environmental, architectural, economical and urban implications such as this one.

From a superficial, aesthetic point of view, the building is significantly larger and thus awkward looking, in addition to being sorely unmatched in geometry and texture to its surrounding and neighbors.

However, how the building will ultimately affect livability and community, and how it will give direction to the area's future organic development, is still unknown. It does warrant concern, but (hopefully) not distress.

I think you raise some very real concerns. I too worry that the DEOD plan with just result in perpetuating the current land uses in the area. I am concerned about lack of diversity that will result from such limited zoning and the lack of choices that will be the byproduct of this short sightedness.

Thanks for all your comments. I will share them with the Director of Planning and staff when I meet with them next week. cheers

I found this article by Elizabeth Greenspan relevant. http://bit.ly/1g0nz5l
What seems to be happening in large cities, like ours as well as New Yorks, is a bifurcation of the population into the very wealthy, who hold professional and especially financial jobs, and the poor, who take care of the wealthy and their buildings. The middle class, ordinary homeowners, is hollowed out.
The DTES strategy, while protecting lower income residents to some extent, would, I suggest, accelerate the trend Greenspan writes about.
Yet I don't know what the solution is (other than national policies to reduce income inequality), but it has to be one that keeps the middle class in the city as well as the wealthy and low income people.

Mr. Gellar your post is right on the money. It does create a ghetto of depressed people projecting off each other. Not healthy.

I've been very fortunate, I have a portable rent subsidy.I'm am able to live in a any neighborhood, volunteer, create a healthy happy life. I've been the very lucky recipient of rent subsidy for over 10 years.. it works and is a really good idea for many capable enough to be independent, and a good neighborhood to others.If you have any questions feel free to ask, I'd love to see the housing situation done in a thoughtful way to prevent further waste of tax $$