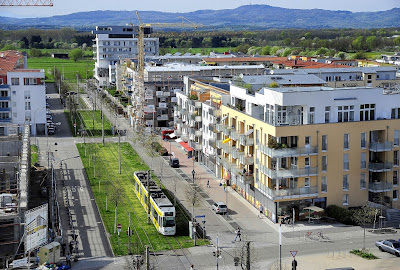 In Geman, the word Rieselfeld means sewage farm, and this is the early history of an area of Freiburg that has been developed into another significant environmentally focused master-planned community. 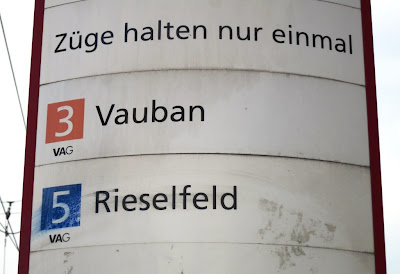 Like Quartier Vauban, it too is located at the end of a tram line that runs through the centre of the community. I read that the plan is the result of an urban planning competition and the project is being carried out by a separate entity owned by the City of Freiburg. 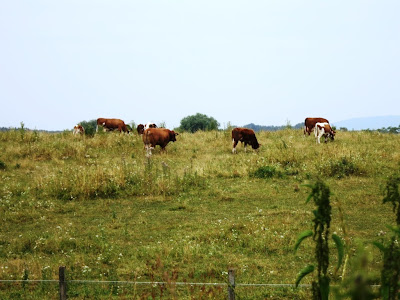 Development began in the early 1990's and the overall plan calls for approximately 12,000 residents in 4200 apartments. (As an aside, this is comparable to the proposed size of the UniverCity community at SFU.) At the end of the main street, next to the transit loop, cows can be seen grazing. 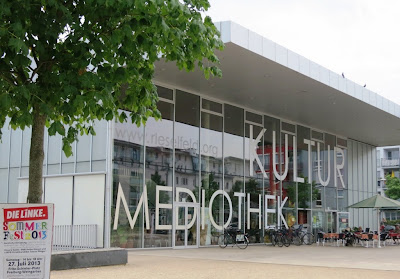 In addition to the housing, the community offers a wide range of social, cultural and educational facilities. 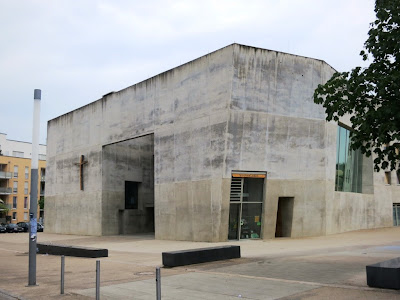 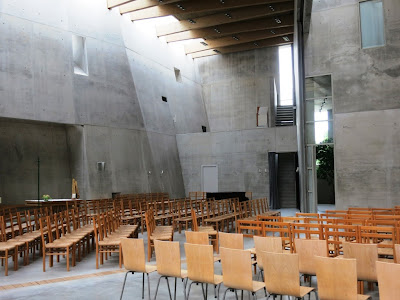 When I was touring the community, one of the residents proudly pointed out a church next to the community centre that is half Protestant and half Catholic! While I liked the concept, I didn't like the raw concrete church design! 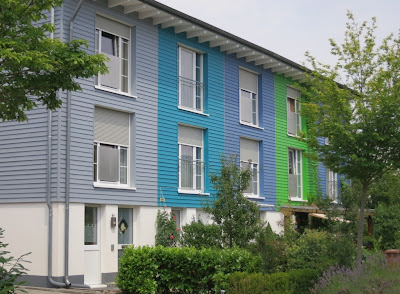 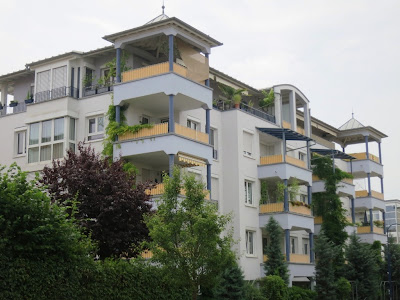 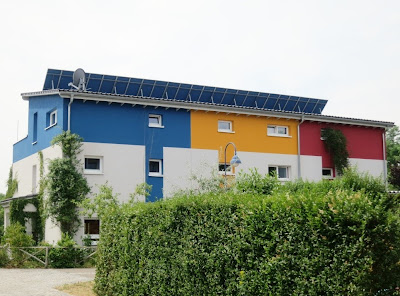 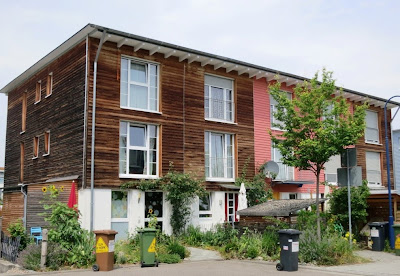 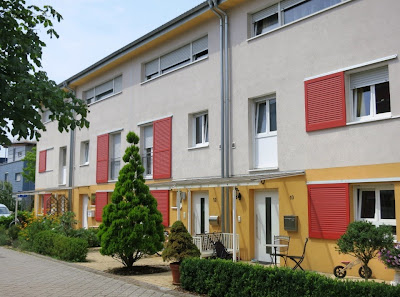 Nearly all of the housing is developed in three to six storey townhouse and apartment blocks. However, many of the buildings are quite small and I was told that small groups and cooperatives were invited to purchase land and develop projects.  Unlike Vauban, I was told that cars are tolerated and indeed, are accommodated in surface lots, underground lots, and along streets. 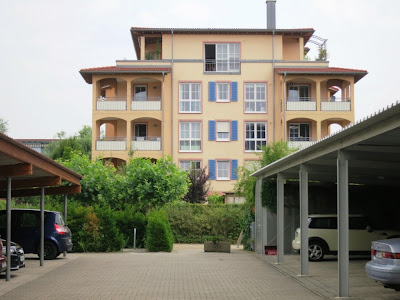 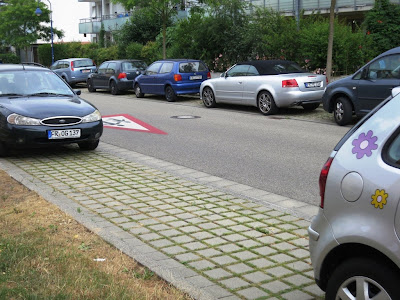 I was interested to see the use of pervious pavers under these parking areas, a design feature we experimented with at UniverCity. 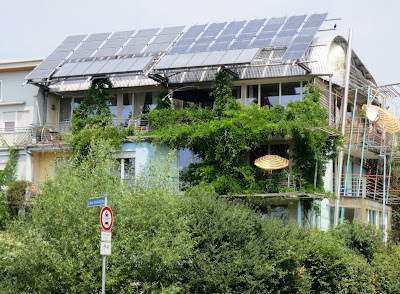 Some were very 'green', if you know what I mean! There is a mix of both market and non-market housing for sale and for rent. It's interesting to note that many more Germans are prepared to rent, rather than own, especially when compared to North Americans. I'll leave it up to you to determine which projects might be rental, and which might be ownership. 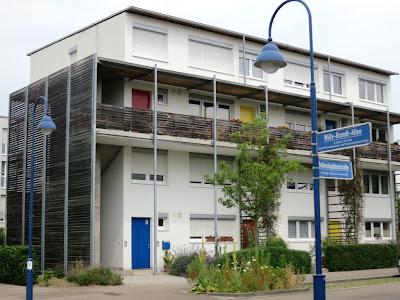 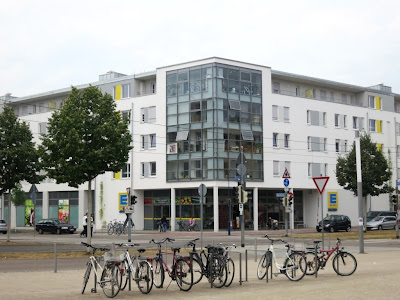 All of the buildings are required to meet stringent energy codes. There is a heavy focus on renewable energy (solar power and photovoltaics) a district heating system, and water conservation. As an aside, when I was telling a local developer about my visit to Germany, he mentioned that a German energy consultant had advised him that what was planned to become one of Vancouver's greenest buildings would not even meet current energy standards in Germany. 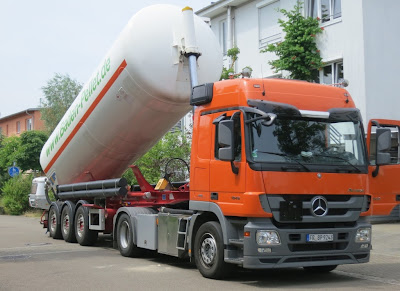 While I was there a large truck pulled up to a house and loaded something into the basement. It reminded me of the oil trucks that used to fill up the tanks of older homes. However, I looked on line and determined that this truck was delivering wood pellets. www.baden-pellet.de 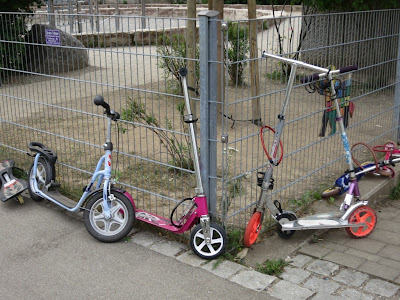 The urban development concept attaches great importance to green spaces, playgrounds, open areas, as well as bicycle paths and traffic-calmed streets where children are encouraged to play. It was wonderful to see so many scooters and children's bicycles parked outside the kindergarten and schools. 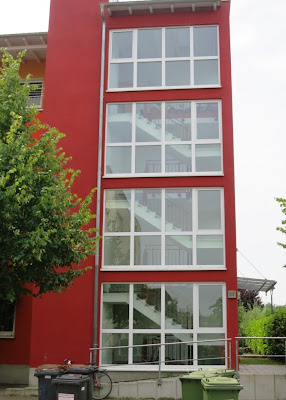 As I wandered around the community I discovered a number of very interesting projects and design features. Many of the buildings featured prominent glass walled stairwells, something we used to do in our older walk-up apartments. Perhaps this is a feature we should re-invent. 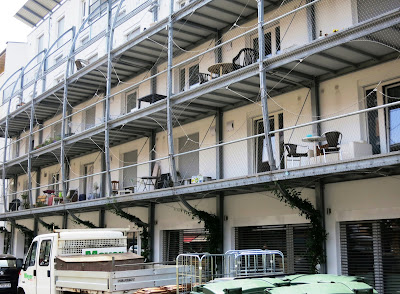 One new building had a facade that incorporated a curviliear metal tube and wire mesh with vines planted at the base. It is expected that it will soon will be covered with greenery. In looking at it, I can't help but think it's one of the non-market developments, rather than a market project. Hopefully someone will let me know if I am wrong! 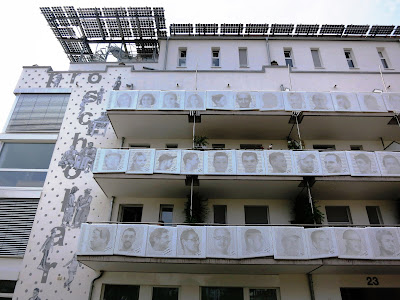 I was intrigued by another building with photographs of people attached to the balconies. I wondered if they were residents, but was subsequently told they were all the workers who helped build the project. Again, I suspect this is non-market housing!  But I could be wrong. There is no doubt that the Germans are much more adventurous when it comes to building design and concept. 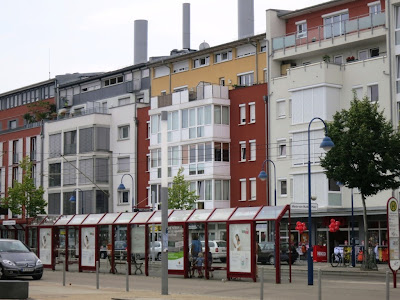 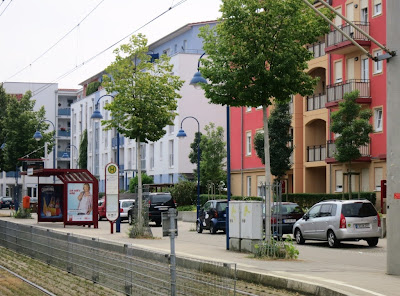 Both Vauban and Rieselfeld offer many lessons for Vancouver. These include community plans designed around a transit spine; higher density but predominantly low and mid-rise building forms built from lot-line to lot-line; very high energy standards; and an overall pedestrian character. I also liked some of the more adventurous architecture although I still wonder about that raw concrete church prominently sited along the main street. It certainly isn't as beautiful as some of the other churches I visted during my four week tour of Germany! 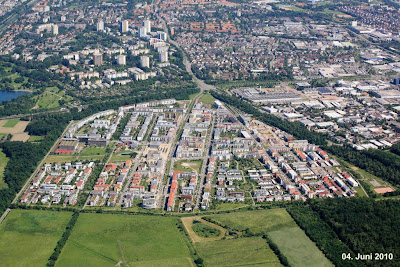 Posted by Michael Geller at 8:15 AM

Your travels and eye for urbanism are much appreciated, Michael.

Thanks, Michael. I'm putting together a small research project on Rieselfeld and found your post as a great jumping off point. Cheers from Nanaimo.

There is a chance you are qualified for a new government sponsored solar energy rebate program.
Click here to find out if you qualify now!