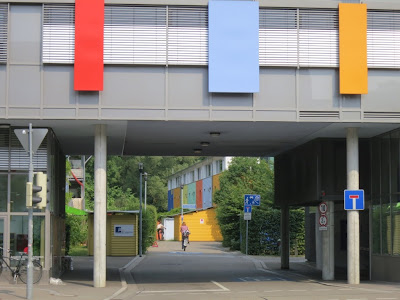 Vauban is a new neighbourhood of 5,000 residents and 600 jobs 4 km to the south of the Freiburg town center. It was built as model sustainable community starting 20 years ago on the site of a former French military base. http://www.vauban.de/info/abstract.html 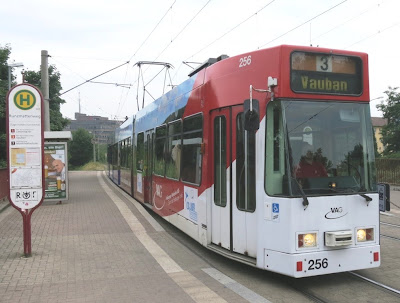 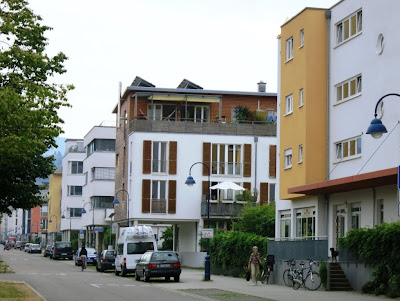 The community is connected to the city center by a tram, and is laid out linearly along the tracks so that all homes are within easy walking distance of a tram stop. Transportation is primarily by foot or bicycle. I was told approximately 75% of the households had chosen to live without a private car. 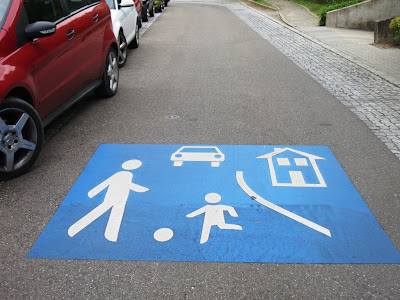 Most of Vauban's residential streets are described as stellplatzfrei - literally "free from parking spaces". Vehicles are allowed down these streets at walking pace to pick up and deliver but not to park, although I saw cars parked in many areas. 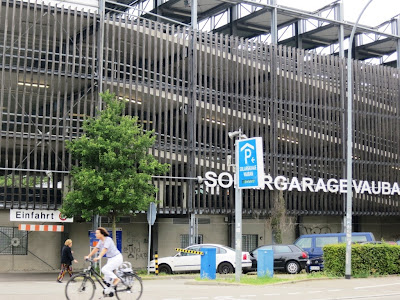 Each year, households are required to sign a declaration stating either that they do not own a car, or if they do, they must buy a space in one of the multi-storey Solar Garages on the periphery of the community.

All houses are built to a low energy standard, with 100 units designed to a Passive House standard. Many buildings are heated by a 'power station' burning wood chips, while many of the buildings have solar collectors or photovoltaic cells. 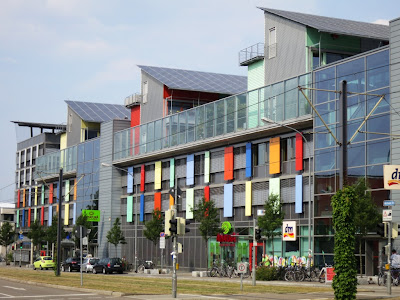 The Sun Ship is a large integrated office/retail building designed by architect Rolf Disch and located on the main street leading into the community. 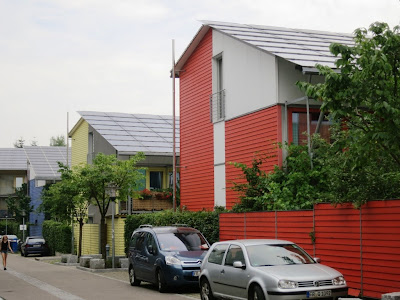 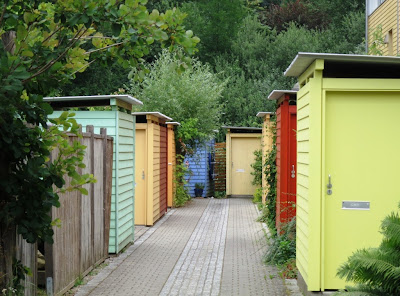 Behind it is the Solar Settlement. It claims to be the first housing community in the world in which all the homes produce a positive energy balance. The solar energy surplus is then sold back into the city's grid for a profit on every home. 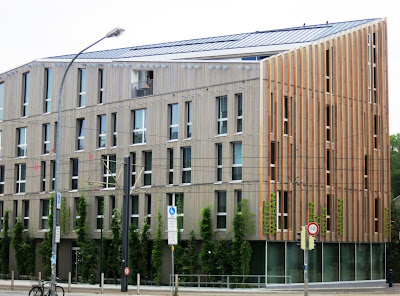 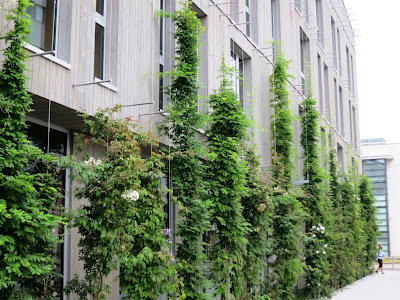 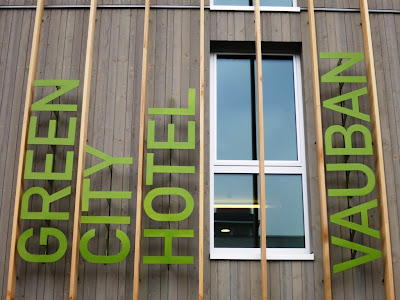 Also by the entrance was the recently completed Green City Hotel and an adjacent housing complex. 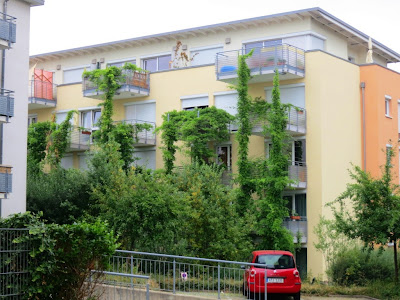 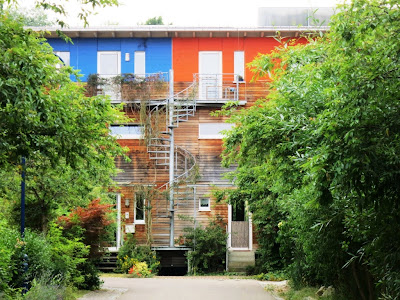 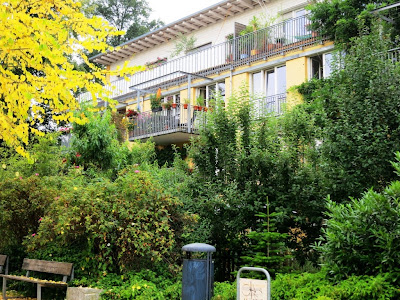 Wandering around the community it felt like an urban, high density version of Hornby Island! Some of wood-clad buildings were fading, while many others were surrounded with greenery, much of which was growing up the walls. 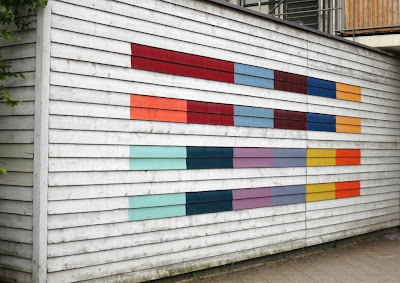 I particularly liked the use of colour and streets that were named after significant figures in the city's history who had similar sensibilities to those who planned the community. 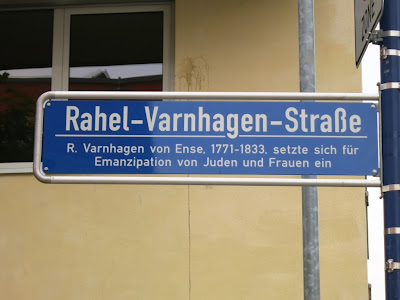 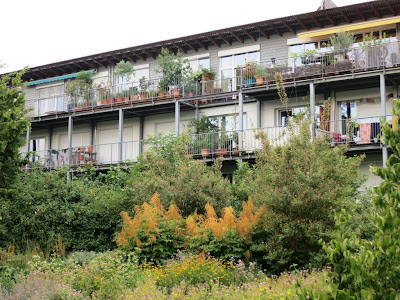 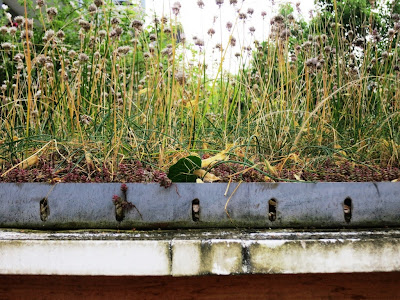 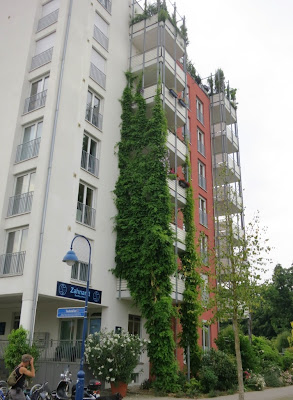 With its green roofs, overgrown greenery, the place had a very natural, but unkempt look about it. Sadly, there was a surprising amount of graffiti, considering this was planned as a very communal development with presumably a high level of community pride. 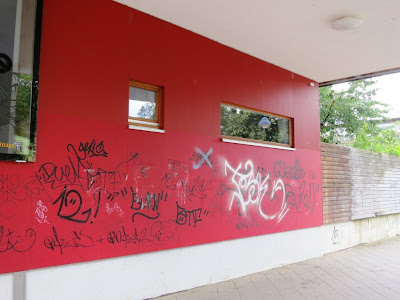 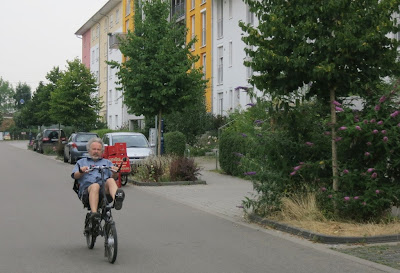 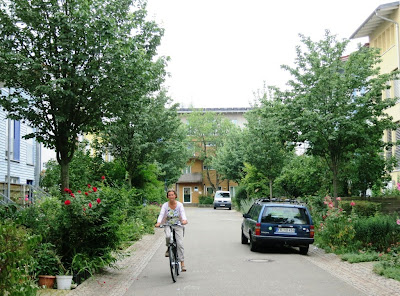 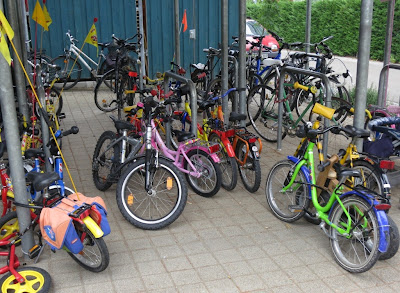 As for who lives there, I was told that there is a mix of market and non-market housing with quite a few of the developments built cooperatively. There appeared to be a large number of children, as evidenced by the many playgrounds, and children's bikes parked outside a school. I suspect the people I saw riding around were probably quite typical of the majority of the residents.

While I thought the place could do with a good tidying up, there is no doubt that this is a very interesting experiment that appeals to a certain segment of the population. In reading about the community on-line, I came across a comment from one resident who claimed that when she asked a taxi driver to take her home to Vauban he commented that he was surprised to see such a normal person living there!

Postscript: Adjacent to the older part of Vauban I came across a number of colourful buildings still under construction and an attractive retail building with a large bicycle shop/repair facility. While I'm not sure they are part of the community, I found their designs very appealing and am posting some pictures, while I attempt to verify with a contact in Freiburg whether this is in fact part of a later phase. of the community. 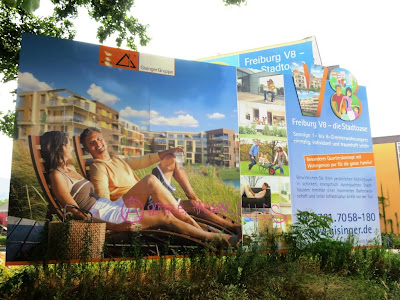 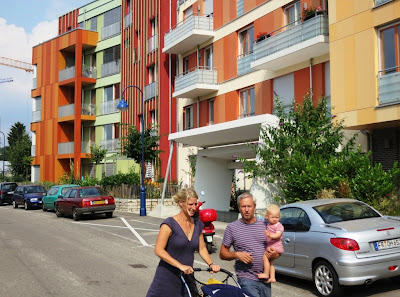 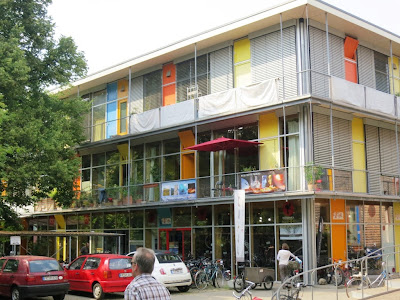 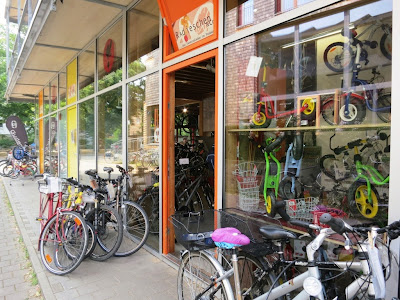 Posted by Michael Geller at 5:42 PM

Great post.
It would be a great help to my school assignment. Thanks!

You might qualify for a new solar rebate program.
Click here to discover if you're qualified now!