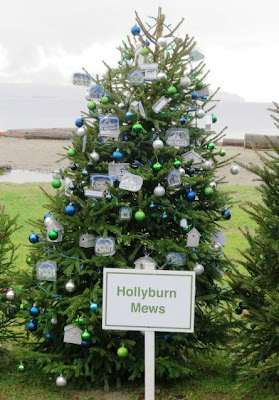 Hollyburn Mews is now on the West Vancouver waterfront.

For the third year, Geller Properties is pleased to participate in the Dundarave Festival of Lights which includes a Christmas Tree display  by various West Vancouver businesses and community organizations on Dundarave Beach at the foot of 25th Street. The initiative is in support of the North Shore Lookout Shelter. While it is hard to believe the North Shore has a problem with homelessness, it does. 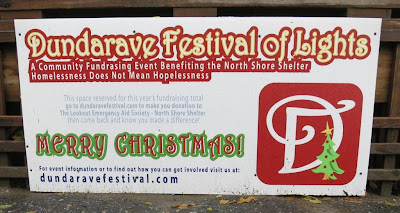 This year's tree features Christmas lights and decorations in blue and green...which to my mind are the colours of 'sustainability'. We also added some houses that were assembled by my daughters and their cousins and painted silver to cover up the mould from being out in the rain the previous two years. 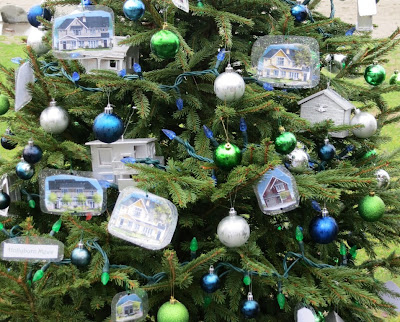 This year we also attached cut-outs of the Hollyburn Mews duplex homes and coach houses since the development is well underway and will soon be going to market.

As I have noted before, Hollyburn Mews is a very modest development, especially compared with some of the developments currently underway by my development industry colleagues, and some of my earlier projects.

However, it is significant since it is the first infill development in West Vancouver to include coach houses.  Designed by my firm and Formwerks, the three coach houses at Hollyburn Mews are quite different from Vancouver's Laneway Housing, in that they are each for sale, and with 1810 square feet over three levels, substantially larger than the laneway houses.

The project also includes six duplex units within three structures designed to look like larger single family houses, in keeping with the existing neighbourhood character. While the development seems somewhat benign, it attracted a letter of opposition from West Vancouver's Jimmy Pattison.  Really!

This 'pocket neighbourhood' has been created for West Vancouver households who are ready to downsize, but not downgrade!

Construction at Hollyburn Mews is being carried out by Trasolini Chetner, one of Vancouver's better quality custom homebuilders. Ironically, while I am normally urging contractors to finish as quickly as possible, in the case of Hollyburn Mews we delayed the construction start and will likely take a couple of extra months to complete so that sales can close once the HST is removed on April 1st, 2013. The construcition program under the direction of Paolo Trasolini and Geoff Gillies is therefore scheduled to finish at the end of March with some landscaping and site works likely taking a bit longer due to weather conditions.

The sales program will formally get underway in early 2013. However, the Disclosure Statement is being filed this Monday by my longstanding lawyers Parolin and Company, and discussions are now taking place with a number of people who have been following the development over the past year or so, and asked to be put on a priority list.

Sales are being handled by Elaine Biggan and Tony Breen of the Prudential Sussex office in Dundarave, which I believe is the largest real estate office on the north shore.

If you would like to read more about the development and see the plans, please go to www.hollyburnmewshomes.com  The website would have been simply Hollyburn Mews but someone reserved this name as soon as the project was approved at Public Hearing, and either forgot or decided not to try and sell me the web domain!

What I hope you'll agree is an easy to navigate website was developed by Opacity Designs who do a lot of real estate marketing work in Metro.
Posted by Michael Geller at 3:37 PM

Wow! After all I got a weblog from where I be capable of genuinely get useful data
regarding my study and knowledge.

magnificent submit, very informative. I ponder why the opposite experts of this sector
don't notice this. You must proceed your writing. I am confident, you've
a great readers' base already!

I leave a response each time I especially enjoy a article on a website
or I have something to contribute to the discussion. It is triggered
by the passion communicated in the article I read.
And after this article "Hollyburn Mews Update". I was actually excited enough to create a comment ;) I actually
do have 2 questions for you if it's allright. Could it be only me or does it give the impression like some of these remarks come across as if they are written by brain dead people? :-P And, if you are writing on other places, I would like to keep up with you. Could you list all of your social sites like your linkedin profile, Facebook page or twitter feed?

This is really fascinating, You're an excessively skilled blogger. I've joined your feed and look
ahead to in quest of more of your magnificent post.
Additionally, I have shared your site in my social networks

Hi, Neat post. There is an issue together with your site in web explorer,
may check this? IE nonetheless is the market leader and
a big part of other folks will miss your fantastic writing
due to this problem.

Hi outstanding blog! Does running a blog such as this require a great deal of work?
I've no expertise in programming however I had been hoping to start my own blog in the near future. Anyhow, if you have any suggestions or techniques for new blog owners please share. I understand this is off subject nevertheless I just had to ask. Many thanks!