Townhouses: maybe not a solution to housing woes, but a much needed option 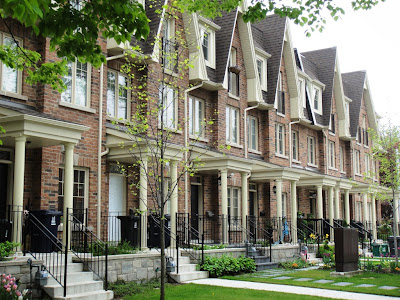 A couple of years ago, I woke up on my birthday to find a mean spirited op-ed in the Vancouver Sun criticizing my attitude towards socially mixed communities. I was not happy.

I was therefore much happier, on this my 65th birthday, to come across another newspaper article, this time by Gary Mason in the Globe and Mail, mentioning me and addressing a topic near and dear to my heart; building more affordable housing choices in Vancouver.

Elsewhere in the newspapers, Shelley Fralic has written a Vancouver Sun op-ed and there's a Letter to the Editor suggesting that rather than potentially ruin Vancouver by trying to build affordable housing, why not simply let people move elsewhere.  I am not unsympathetic to the argument that those seeking affordable housing move elsewhere, noting that New Westminster and the Tri-Cities and Surrey, etc are beginning to create very attractive communities.  Similarly, smaller towns like Trail and Nelson offer attractive choices for those who can't afford Vancouver.

However, I still maintain that Vancouver needs to create additional housing choices, both for those seeking more affordable housing, and the many longstanding residents like me who may soon wish to downsize while remaining in their neighbourhoods, and want to see their children living in the City as well.

For these reasons I participated in the Mayor's Task Force on Affordable Housing, chairing a Roundtable that looked at Building Form and Design, and am a defender of many of the ideas now being put forward by the Task Force and City Council. I look forward to the coming years as more townhouses and stacked townhouses are built in the City, for those of us who are not yet ready for an apartment, but either unable to afford, or not wanting to live in a single family house.


Opinion: Townhouses not the solution to Vancouver’s housing woes

GARY MASON
The Globe and Mail
5 comments
Of all the recommendations in the report from the city of Vancouver’s housing affordability task force, the one that received the most attention is the least likely to drive down costs – thin streets.
Thin streets is the concept whereby the city splits a standard, 66-foot-wide road in two
to allow the construction of new homes along one half. An example of what this would look like received wide distribution around the release of the task force’s review.

And what it looked like was this: the extra 33 feet being used to build homes that appeared,
in size and structure, very much like the older ones that would exist beside them. Homes that are worth (sometimes well) in excess of $1-million.  So what is the likelihood that the new homes – thanks to the city splitting a street in half –are going to be any cheaper than homes already in the neighbourhood?
If anything, Given the fact that they new homes would be, well, newer with all the modern amenities, they are likely to be even more expensive.

An affordability game changer thin streets is not. Which is why it’s unfortunate that the idea became such a talking point and, for a while, commandeered the discussion of the task force’s work. Still, Mayor Gregor Robertson and his Vision Vancouver government deserve credit for attempting to address the affordability crisis in this city, as futile as that effort may ultimately be.

There is also a lot of talk in the report, for instance, of the need for more options like townhouses, which take up less space and are generally considered to be a cheaper alternative for home buyers. But, of course, when you are talking about real estate in Vancouver, the term “cheaper” is always relative.

In the past couple of years, a few townhouse projects have sprouted up along Oak Street. Many of the units were being sold for prices that reached into the high $900,000s and, often, north of $1-million. So I’m not sure how anyone thinks more townhouses are going to be the answer to affordability.

Even if you build stacked townhouses, effectively townhouses on top of townhouses, it’s still going to cost well over $700,000 per unit just about anywhere in the city. Yes, that’s less expensive than those townhouses along Oak Street, but I’m not sure you could ascribe the term “affordable” to them. Are these the places that are supposed to open the doors to first-time home buyers? The government considers housing as affordable if it consumes less than 30 per cent of household income. Given that in 2010, the median household income in Vancouver was just over $67,000, I don’t see how more townhouses are going to reduce the financial stress on families trying to get into the market.

Architect and developer Michael Geller, the mind behind some of the more imaginative and successful multiunit real estate projects in Metro Vancouver and who was a consultant on the task force report, agrees that townhouses in the city of Vancouver aren’t affordable by most measures at the moment. But he believes prices will come down as more of that type of housing is built.

“When they’re the only buildings of that type around, a developer can pretty much set his own price,” Mr. Geller told me. “But once you build more of it and there is a competition in the market place, then you generally see prices start to come down. I think that’s what we’ll see here.”

I’m not sure I’m buying it, but it’s worth a try. The alternative is for the city to throw up its hands and say it can do nothing about the affordability dilemma. So in an attempt to mitigate the problem, it has decided to rezone designated areas to make way for six-storey apartment buildings. And perhaps a swack of townhomes, and row and stacked housing and carriage houses in every laneway will help, too. Any relief would be welcome.

Now, the city just has to fight off the small army of residents that is forming to oppose any change in their neighbourhoods. This, too, was expected, and some people will likely be extremely unhappy at the end of this process – but that comes with making change in the name of the greater good.
The mayor’s task force may have created a blueprint for more housing in Vancouver. Whether it will ever be considered affordable is another matter entirely.
Posted by Michael Geller at 8:45 AM

Hey this is really a great blog for those planning in on apartments and condos with great design...

Today, I went to the beach with my kids. I found a sea shell and gave it to my 4
year old daughter and said "You can hear the ocean if you put this to your ear." She put the shell to
her ear and screamed. There was a hermit crab inside and it
pinched her ear. She never wants to go back! LoL I know this is completely off topic but I had to tell someone!

Hey I know this is off topic but I was wondering if you knew of
any widgets I could add to my blog that automatically tweet my newest twitter updates.
I've been looking for a plug-in like this for quite some time and was hoping maybe you would have some experience with something like this. Please let me know if you run into anything. I truly enjoy reading your blog and I look forward to your new updates.

Thank you for the good writeup. It in fact was a amusement account it.
Look advanced to far added agreeable from you! However, how can we communicate?

Hey I am so thrilled I found your blog page, I really found you by accident, while I
was researching on Yahoo for something else, Nonetheless I am
here now and would just like to say thanks a lot for a remarkable post
and a all round entertaining blog (I also love the theme/design),
I don't have time to look over it all at the moment but I have saved it and also included your RSS feeds, so when I have time I will be back to read much more, Please do keep up the awesome job.

It's actually a cool and useful piece of information. I am satisfied that you just shared this helpful info with us. Please stay us informed like this. Thanks for sharing.

Hey there! Would you mind if I share your blog with my myspace group?
There's a lot of folks that I think would really enjoy your content. Please let me know. Thanks

Here is my web-site; Elgg.Summervillecountryclub.Com

This article will help the internet people for creating new web site or even a weblog from
start to end.

If you wish for to get a good deal from this paragraph then you
have to apply such methods to your won blog.

You could certainly see your expertise in the article you write.
The sector hopes for more passionate writers like you
who are not afraid to mention how they believe. All the
time go after your heart.

Hey there, You have done a great job. I'll definitely digg it and personally recommend to my friends. I'm confident
they'll be benefited from this site.

Pretty section of content. I just stumbled upon your website and in accession capital to
assert that I acquire in fact enjoyed account your blog
posts. Any way I'll be subscribing to your augment and even I achievement you access consistently quickly.

Howdy! Do you know if they make any plugins to protect against hackers?
I'm kinda paranoid about losing everything I've worked hard on.
Any tips?

constantly i used to read smaller articles or reviews that
also clear their motive, and that is also happening with
this paragraph which I am reading at this place.

Hey, I think your site might be having browser compatibility issues.
When I look at your blog site in Opera, it looks fine but
when opening in Internet Explorer, it has some overlapping.
I just wanted to give you a quick heads up!
Other then that, great blog!

Pretty section of content. I just stumbled upon your blog and in accession capital to
assert that I acquire actually enjoyed account your blog posts.
Any way I'll be subscribing to your augment and even I achievement you access consistently quickly.

Hi there! I could have sworn I've been to this website before but after checking through some of the post I realized it's new to me.
Nonetheless, I'm definitely glad I found it and I'll be book-marking
and checking back frequently!

I used to be able to find good info from your content.

Greetings from California! I'm bored to tears at work so I decided to browse your blog on my iphone during lunch break. I love the knowledge you present here and can't wait
to take a look when I get home. I'm surprised at how quick your blog loaded on my phone .. I'm not
even using WIFI, just 3G .. Anyhow, great site!

Feel free to surf to my blog post :: http://www.Lyrik-Base.de/

Hello there! I know this is somewhat off topic but I was wondering if you knew
where I could locate a captcha plugin forr my comment form?
I'm using the same blog platform as yours
and I'm having problems finding one? Thanks a lot!