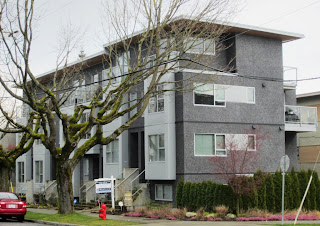 The following Letter to the Editor appeared in today's Vancouver Sun:

Re: ‘ Thin streets’ could boost affordability, Sept. 27
Why would the addition a few houses in an expensive city make housing more affordable? It hasn’t happened in other cities.
How can the city take away someone’s corner lot and plunk another house beside it, or a row of townhouses, completely out of step with the existing neighbourhood?
The resulting “thin” street would be dangerously narrow, making it difficult for emergency vehicles and local traffic to get through. And, of course, one lane of parking will disappear, another assault on the automobile.
Open street spaces are very welcome and much needed, what with the continued encroachment of larger homes and laneway houses.
We’ve just been subjected to a task force led by developers and we know what their goals are. B. K. GOODSON Vancouver

I completely disagree with the headline, and the writer's final statement, but do share his concerns regarding the likely benefits of the 'Thin Streets' idea.

I mentioned to some Task Force members and City staff, that the Thin Street proposition, (that came from the ReThink Housing Competition organized by the City rather than from either the Task Force  or the Roundtable on Form and Design) has unfortunately hijacked many of the very good recommendations of the Task Force.

While the Thin Streets idea is intriguing, I do not forsee widespread application of it for various reasons. It has negative impacts on corner lot owners, takes away greenery and in some case important north-south views, and could be more expensive than the proponents anticipate to relocate roads, street lights, sidewalks, other services, etc.

In some instances I could see how it might result in additional lots that might be developed with more than one unit, or combined with the corner lot to allow a small townhouse or stacked development as illustrated above.

That being said, I strongly disagree with the suggestion that more housing supply will not impact affordability. It will.

Currently, there are very few undeveloped sites zoned for townhouse or stacked townhouse developments. However, these forms of housing would provide more affordable housing choices in the city.  Now some might ask, why will they be more affordable when the recent townhouse developments along Oak Street and Cambie street are quite expensive. That's because the developers had little competition, and in some cases had to pay significant Community Amenity Contributions to the City, tied to the increase in land value resulting from the rezoning.

If there were hundreds of sites available for alternate forms of housing, as contemplated by our suggestion of creating 'transition zones' behind arterials, and multi family housing along arterials away from the commercial cores, and if Community Amenity Contributions were fixed at pre-determined and reasonable levels, I am confident that more supply will result in more affordable housing.

Now as for the suggestion that the Task Force was "led by developers" and that's why we're seeing ideas like the Thin Streets, this is simply wrong. Yes, Co-chair Olga Illich is a developer, and there were  developers on the Task Force, and I am involved in development as well as architecture and planning, the developers were at a minority in this process. Moreover I can say that none of the developers I know advocated for the Thin Streets idea. This idea came from two former City and Metro Planners, and was promoted by City staff and Council...not builders or developers.

In summary, I do believe that the decisions made by Council this week will ultimately lead to increased housing supply and increased affordability.  It will take time, but five years from now, young couples and empty nesters will be able to buy and rent forms of housing that are not often being built today.

However, I won't be surprised if only a very small number of these homes will be on newly created corner lots.  If any!
Posted by Michael Geller at 8:32 AM

Nice blog work. I came across your blog while “blog surfing” using the Next Blog button on the Nav Bar located at the top of my blogger.com site. I frequently just travel around looking for other blogs which exist on the Internet, and the various, creative ways in which people express themselves. Thanks for sharing.

Simply wish to say your article is as amazing. The clarity in your post is just cool and i can assume you're an expert on this subject. Fine with your permission allow me to grab your feed to keep updated with forthcoming post. Thanks a million and please carry on the enjoyable work.

As the admin of this web site is working, no question very shortly
it will be renowned, due to its feature contents.

Good article! We will be linking to this great article on our website.
Keep up the good writing.

Hi, i believe that i noticed you visited my site
thus i came to go back the want?.I am attempting to
to find things to improve my web site!I suppose its ok to
make use of some of your ideas!!

Nice post. I used to be checking constantly this
blog and I am impressed! Very useful info specifically the final
section :) I care for such information a lot. I was looking for this
particular info for a long time. Thank you and good luck.


Here is my blog ... bmi calculator for adults