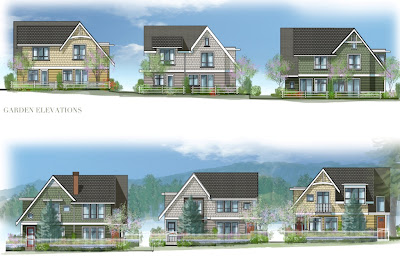 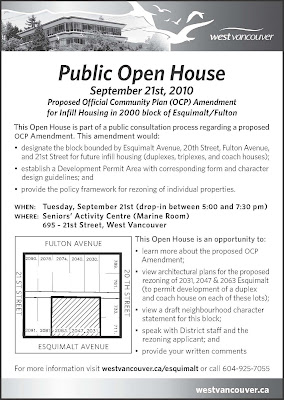 For some time I have been talking and writing about the need for more housing choices for those who want to move out of larger single family homes, or homes on larger lots, into smaller, more suitably designed homes. I have also promoted the concept of what some have called 'gentle densification' which would allow two or three homes to be built on one, appropriately located lot.

Through a series of happy coincidences, I have recently partnered with Joel Slone, a small West Vancouver homebuilder in what I hope will be a successful infill development in Hollyburn to demonstrate these ideas. The proposal is to redevelop three single family properties with three smaller duplexes and three coach houses.

The proposal has been going through the planning and approval process in West Vancouver for some time. Known as Bowling Green, the properties are kitty corner to the bowling greens at 20th and Esquimalt, and next to the Seniors' Centre and new Community Centre complex. One block off of Marine Drive, it is a most suitable location for this type of housing

In order to be built, the proposal will need both an Official Community Plan Amendment and a rezoning. Rather than 'spot-zone' just the three properties, the District of West Vancouver, with the support of the adjacent property owners, is proposing to amend the OCP for the full block. This will allow Council to consider rezonings for the remaining properties which could also be redeveloped over time with similar forms of housing provided they respect the surrounding neigbhourhood's single family character. 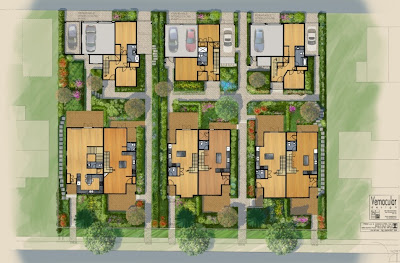 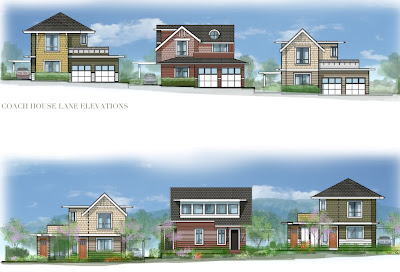 The proposed FSR is 0.63 which is very similar to the 'outright' permitted single family density in many other municipalities. I am hopeful that this project will be approved in order to help people understand what 'gentle densification' looks like. The final designs will be inspired by some of the lovely cottage homes that have recently been built in Washington State.

An Open House is being held this evening to present the proposals to the public. If you have had concerns about this proposal in the past, or are interested in more housing choices for the future, I hope you will drop by. 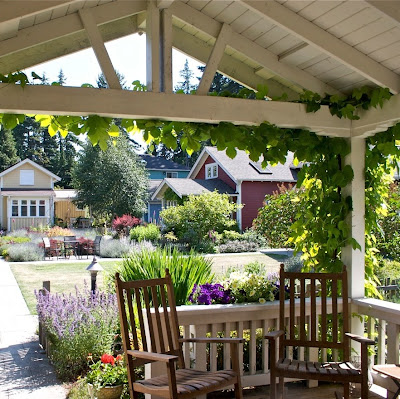 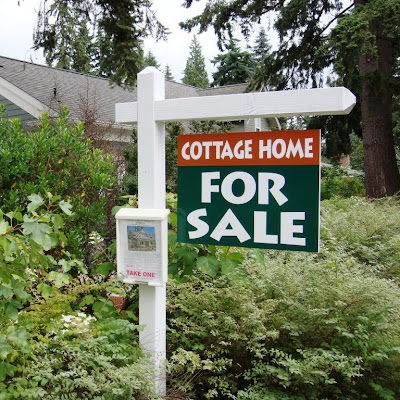 Posted by michael geller at 6:19 AM

Nice post on the need for a larger variety of housing in every municipality.

As an East Van resident, I also found rather fascinating that your big change in density is to .63 FSR!

Thanks Wendy. You and I know that 0.63 is single family density in Vancouver, but in West Vancouver, and parts of North Vancouver, the current density is 0.35, so this is seen by some as a significant increase. Hopefully I can prove that even at 0.63, the housing can fit in with the surrounding homes quite nicely.

How did the open house go? I'd love to see a bit more space between the houses and lane home to get that common area that ewe see in the Washington development you reference. I understand the reasons for for it not being possible - we're all bound by respecting the setbacks, etc. Reducing the expansive front yard setbacks our municipalities insist upon would really assist us in doing some really interesting things with these proposals (like a larger central common space/garden). I look forward to seeing how this progresses.

Cameron, Thanks for your comment.I agree with your comments. As we fine tune the plans we will do what we can to improve the sense of openess between the main units and the coach houses. But as you correctly point out, the front yard setback is a critical aspect of this.