This 24 Hours Story Really Upsets Me... 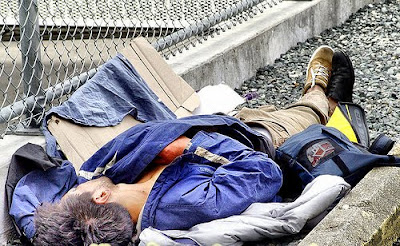 I was really bothered by this story in Thursday's 24Hours...please read it...I think you will know why.

EXPECT MORE TENTS IN THE CITY

About 30 people were left at 58 West Hastings Wednesday to gather the last of their possessions before vacating the Concord Pacific-owned land, which served as a demonstration of the city’s homeless issues during the Olympics. The protest spurred BC Housing into action and discussions are underway to find all the homeless at the site a place to live.

of the Carnegie Community Action Project. “That’s the wave of the future,

when [cold weather] shelters close April 30, there will be more tent cities.

When people put themselves in front of the media and public with their friends, they get housing.”

Richard S. Buttery recently arrived from and bounced around

between shelters and hospital stays before landing at the tent city.

Now he’s looking forward to the clean, warm bed that awaits at the end.

“There was no place to put me, but I had a good experience here,” he said. “I

But while a few dozen people can look forward to a fresh start, Buttery said the

struggle isn’t over. “Go outside this fence and go up a block or two,” he said,

pointing towards Main and streets. “Those are the people the government needs to get off the street any way they can.

So what's my problem?

It's Richard S. Buttery, who recently arrives here from Toronto, and 'bounces around' between shelters and hospital stays, but thanks to the organizers of the Red Tent Campaign, now has a clean, warm bed.

I am also disturbed by thought that we will have to see more tent cities because in a way, Wendy Pedersen is right...they do seem to work. At least, they did in this instance.

Mayor Robertson, Minister Coleman. I know you want to end homelessness by 2015, so this can't continue. We simply can't afford to find housing for everyone who decides to come from Toronto, or other parts of Canada because they know that Wendy Pedersen and Judy Graves and BC Housing will all be working together to help them get a free, nice warm bed.

Let's stop and review what's really going on here. We can't continue like this.

Posted by michael geller at 8:22 AM

That's why a national housing solution is so important.

Vancouver is in a bit of a bind: any solution to end homelessness might attract more homeless people from across the country, especially in the absence of a federal solution. However, even if Vancouver does nothing, homeless people will continue to arrive in the city because sleeping rough on a Vancouver street in December is a lot more palatable then sleeping rough in Winnipeg.

I totally agree Michael. I've heard some estimates that as much as a third of our homeless are troubled kids from Quebec. I sympathize with their situation and I think the Federal government should help them out. But I don't think Vancouver should be footing the bill.