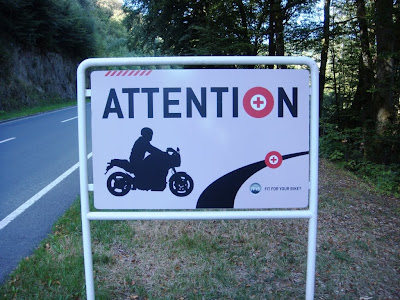 When I was in Belgium, I was impressed by the variety of efforts to reduce traffic accidents and fatalities. Some of the steps taken included raised intersections, more clearly marked pedestrian crosswalks, warnings for motorcyclists, and separate bicycle lanes.

On returning home, I have become aware of other differences between traffic in Belgian cities and Vancouver. The following are three areas that I think warrant further consideration:

1. KEEP TO THE RIGHT, EXCEPT TO PASS
Drivers in Belgium are much more disciplined in terms of the lanes in which they drive. People rarely 'pass on the inside'. Instead, drivers tend to stay in the inside lane, except when passing. And then they return to the inside lane. I also noticed this level of driver discipline in Australia (albeit, there they keep to the left, except to pass). In fact, it's a CRIME to pass on the inside. I can't help but think this would reduce accidents since on our roads, people seem to be very impatient, passing on the inside, the outside....

2. SPEED CONTROL ZONES
Of course we have speed controls along our roads. However, although the applicable speed zone registered on my GPS navigator in Belgium and Luxembourg (see below, I was in a 70km zone), this does not appear to be the case here (unless I need to do some additional programming). I found it very helpful to be able to check the speed zone, and my actual speed on my navigator as I drove around Belgium, especially since I was also notified of fixed and mobile radar zones. Now, why don't we allow the applicable speed to register here? 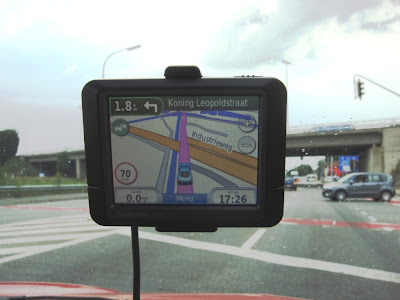 3. NO RIGHT TURN ON RED LIGHTS
Throughout Belgium, right turns on red lights are prohibited. NowI realize there may be merit in allowing right turns on red lights in certain situations. However, in most others I think they threaten pedestrian safety, and increase the likelihood of vehicle accidents. I wonder if studies have been done to compare traffic accidents in jurisdictions that restrict turns, and those that don't.

Now, some will argue that turns on red lights are necessary to keep traffic moving. I understand this. However, another and perhaps better way to keep traffic moving would be to legislate against people who drive into intersections, and then get 'stuck'. In UK, you would never drive into the intersection 'box' unless you were absolutely certain you could proceed through before the light changes since you would receive a very substantial fine. Why don't we do the same?

Some things to think about.
Posted by michael geller at 11:42 AM