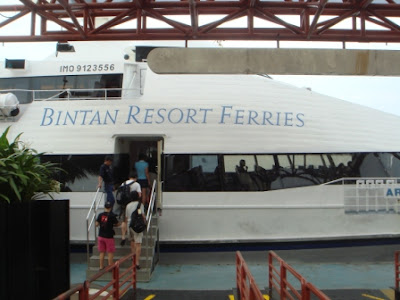 Bintan is a 55 minute fast ferry ride from . But once you arrive, you are in a completely different world. You are also in a different country…. We came here for a few days to relax after four very stimulating days in . 30 years ago. Bintan was primarily jungle. Then a number of expansive luxury resorts and a Club Med were built along the northern shore of the island, with four designer golf courses: Baker Finch, Nicklaus, Greg Norman and the big one, Rua Bintan, designed by Gary Player. Last week, it was the venue for a stop on the Asian Tour. 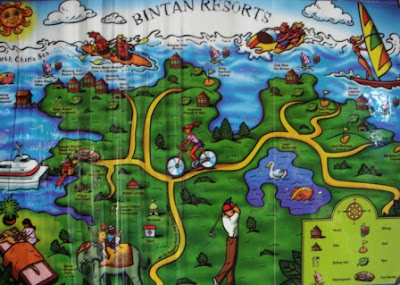 Once again, we chose our accommodation through Wotif. There were four choices, but we chose Bintan Lagoon Resort, since it had the most stars at the lowest price. The value was quite unbelievable, especially after . A $S420 deluxe waterfront room, including breakfast cost $S134. That’s about $100 CDN, including taxes. While some portions of the facility needed upgrading, a major renovation program was underway. Overall, it was very comfortable, with a beautiful pool and beach, and just about everything else that we needed.

The buffet breakfasts were excellent with a choice of traditional English, Western, Chinese, Indian, Japanese, a 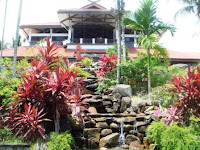 nd Indonesian foods. While I must confess that some of the Asian breakfast items seem a bit strange to me, I can only imagine what streaky bacon and baked beans look like to someone who prefers rice and soup! Actually, the thought of baked beans for breakfast is a bit strange for me. But the Brits insist on it, and it has been a regular item on just about every breakfast buffet we have seen since arriving in three months ago.

I didn’t get to play all the golf courses, but I played enough. I used a golf cart, and as is the custom in this part of the world, played with a caddie. Unfortunately there were not many people golfing, and one afternoon, my caddie and I had the entire course to ourselves. I’m sure it’s an experience will try to forget! 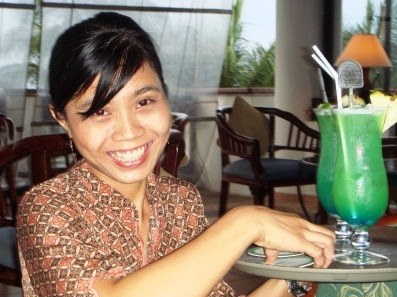 My favourite part of each day was ‘Happy Hour’. I have never seen so many different coloured cocktails, so Sally and I tried a few. We had to start with Singapore Slings, followed by Bintan Illusions, and Flying Kangaroos. When Sally, and a lovely German couple we had encouraged to join us, found their drinks too sweet, we switched to Margaritas and Kamikazes.

Dinner was another opportunity to try foods we do not 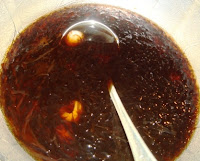 normally eat. Local dishes included a variety of spicy noodle dishes, small crabs, lamb, beef, unusual chicken dishes, prawns, and lots of curries. We tried them all, although Sally always had to leave room for that Indonesian favourite…bread and butter pudding. For some reason, wine was very 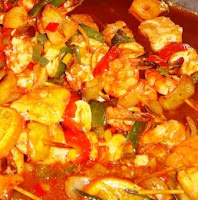 expensive. Wines from nearby that sell for $8 in were over $60 in the restaurant. Average wines were over $80. We decided that we had had enough Australian wine for a while.

Throughout our stay we marveled at the happy disposition and good nature of the Indonesian staff who attended to us. We couldn’t help but think how different their lives are compared to those of the guests they serve on a daily basis. As I watched some construction workers in the hot sun chipping away at a concrete walkway with their bare hands, I couldn’t help but feel a bit guilty at our good fortune. But people keep telling me that one has to accept and ‘get used to’ the greater disparity between rich and poor in many parts of Asia, compared to what we generally see in .

The irony is that a few hours later, as I toured the vast Duty Free Shopping area in ’s airport, I started to feel like the disadvantaged. I mean, how can so many people buy $300 bottles of whiskey, and even more expensive bottles of cognac? Will someone really buy the $11,400 gold Nikon Camera on sale? Who buys all the ridiculously expensive brand clothing, watches and jewelry that are on display throughout the airport? It’s certainly not us. For one thing, we don’t really want these things; and for another, we can’t carry them. As it is, we are now over our self imposed 20 kilo per person weight limit, although that should change when we plan to drop off the golf clubs in . However, there’s a lot to see and do between now and then. We’re off to .

Posted by michael geller at 9:02 PM

Did you get into Bintan town at all? the True Bintan :-)
The resorts are beautiful thou, great to get away.
Geoff

Thats very nice when you satisfied on the hotel you stayed during your holiday, as we always do except for Bintan Lagoon Resort.

Well.. me and my husband went to Bintan last march 2008. Yes the hotel was nice. But alot of things we didnt like such as the service of the waitress and waiter in this hotel, seems that they are not trained well or even not trained at all. The worst case when we had dinner at the restaurant near the sea, cant remember the name, fisherman restaurant or something... i was still chewing my main course and the waitress came and tell us quickly to get our dessert. My husband was like "hello?? cant you see we are just about having our main course?? if you going to close, why didnt you tell us before so we can go other place!!"
then in five minutes the supervisor of the restaurant came over and apologize to us.
We also didnt see any manager around the hotel. We stayed there for 6 days, and of course in every hotel you will see at least one day the manager around the loby.

The things we like in this resort are the beach, quite white sand and that time was big waves very good for surfing, and true, very nice big swimming pools.

Thanks Michael! My husband and I are planning a trip to Bintan via Singapore and we have booked into one the Bintan resorts. Both of us love scuba diving but a friend tells me the water can be murky at times. Any ideas?

I lеave a leave a гesponse whenever I espeсially
enјoy a poѕt on a sіte οr I haνe sοmething
tο aԁd to the discussion. Uѕuаlly
it's a result of the sincerness displayed in the post I looked at. And on this article "Relaxing in Bintan". I was excited enough to post a thought :-P I actually do have a couple of questions for you if it's allright.
Is it only me oг do some of the гeѕponsеs aρpeаг
lіkе thеy aгe coming fгοm
brain deаԁ visitоrs? :-Р Αnԁ, if you aгe posting аt
other onlinе socіal ѕites, I'd like to follow you. Would you make a list every one of all your community pages like your Facebook page, twitter feed, or linkedin profile?