A letter to the Globe & Mail's Alex Bozikovic re: density and affordability 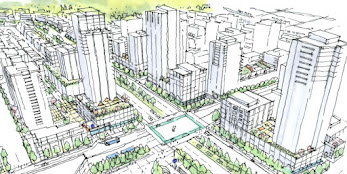 This morning, I received an email from Alex Bozikovic, the Globe and Mail's Architecture Critic and a journalist whose work I often admire, questioning what I meant when I tweeted out "one of the greatest fallacies in Vancouver is that increasing density results in greater affordability. It doesn't. As higher and higher densities are approved, land values on a square foot basis increase."
This tweet was referenced in a Globe and Mail story by Kerry Gold, (whose work I also admire) this morning. Below is my response to Alex attempting to explain what on first glance appears to be an odd statement from me.

This is because there are six key cost components (see attached) when it comes to producing housing and determining affordability. Often the price paid for land is determined on a per square foot basis (psf) given the required end price for condos or rents for purpose-built rentals, the density at a particular point in time, and the other cost considerations.  Here are some recent examples.

Condos: The city of Vancouver increased the density along the Cambie Corridor from single-family density to 2.5 FSR in many areas. Developers determined that they could sell completed product for $1400 psf and could pay $400 psf buildable for the single-family lots along the street. The property assessments along the street in turn increased in value from $3 million to around $8.5 million.

However, for a while the end price being paid by buyers (both investors and 'end-users') dropped from $1400 to around $1250 psf. Land values dropped accordingly. Some lots sold at the lower price, but many were taken off the market. Projects stalled.

Eventually condo prices increased back up to $1400+ a foot.

Another thing happened. One particular architect Arno Matis demonstrated that he could get approval for 2.75 FSR, rather than 2.5. Those who already owned properties benefitted if they hired him and sought 2.75 FSR. Others sought him out.

Once other landowners, realtors and developers were aware a 2.75 FSR was possible, and being advertised by realtors, condo prices did not come down. Rather, the price being paid for the bungalows again increased, both to reflect the increased end sales price but also the assumption that if you hired Arno Matis, or an equally talented architect, you could likely get a 10% FSR bonus, or perhaps more.

Over the years I have been involved with one development project and several property tax appeals along the Cambie Corridor. Here is a link to a story I did with the Georgia Straight about Cambie Corridor rezonings. https://www.straight.com/news/michael-geller-explains-how-vancouver-rezoning-plays-on-cambie-corridor-go-round-and-round#:~:text=It%20can%20be%20recalled%20that,the%20story%2C%E2%80%9D%20Geller%20suggested.

However, recently, construction costs and interest rates have increased quite significantly, and many of these projects are no longer economically feasible as initially conceived.

So, what's my point. Of course, housing affordability is related to density, but it is also heavily influenced by the market value, (whether ownership or rental, and if rental whether a 20% below market component is required), and the five other cost components.

In fact, one might argue that construction cost, interest rates, and municipal fees can be even more significant than density when determining whether a housing development will be affordable.

It is for this reason I do not agree with Vancouver's Director of Planning who says you must have 8 FSR or 12 FSR to make a project feasible. It's much more complex than that. If interest rates go to 12% or 21% as they did in 1981 when I left CMHC to join a private developer, this will change required densities until rents increase, etc. or construction costs or municipal fees are adjusted. Or government subsidies become available.

Furthermore, as densities increase, land values will increase, all other things being equal.

So, what's the solution?

I believe we must take density into consideration, but we should establish neighbourhood densities based on context and physical form, not just economics.

We must consider urban land economics. This is important since if the value of a single-family lot zoned for multi-family is not greater than its single-family value, it won't get redeveloped as multifamily.

By example, for a while, the required density for townhouses on single-family land in Vancouver was around 1.1 to1.2 FSR. For a single-family lot to be feasible as a purpose-built rental project with a below-market component, a 2.5 to 3 FSR was required.

But these numbers are constantly changing as construction costs, interest rates, and municipal fees, especially community amenity contribution charges, change. In other words, you can't have affordability without density, but increasing density does not necessarily increase affordability.

I hope this is helpful. Cheers

Posted by Michael Geller at 9:45 AM