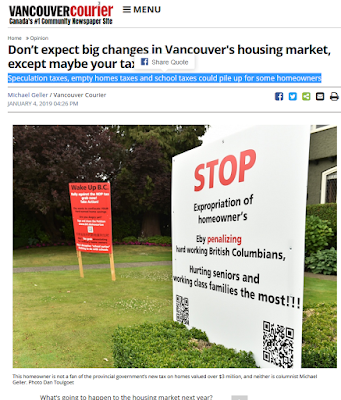 Of all the columns I have written over the past 4 1/2 years, this one has generated the greatest consumer response. There are a lot of people out there who normally don't complain about government policies who are incensed by the so-called School Tax. While I doubt that we can do anything about it until a Liberal government is elected in Victoria, as noted further in this column, those homeowners who are facing extraordinary property assessments because their property is located in an area that has been approved for higher density housing or mixed use development, can seek relief under secition 19(8) of the BC Assessment Act. Further details can be found here:  https://info.bcassessment.ca/Services-products/property-classes-and-exemptions/section-19-8-of-assessment-act-special-assessments-for-certain-long-term-residents

Speculation taxes, empty homes taxes and school taxes could pile up for some homeowner

What’s going to happen to the housing market next year?
Hardly a day goes by when I’m not asked this question, whether in the grocery store or my club’s hot tub.
related
The fact is, there is no one housing market. There are many different markets. They include high-end single-family properties, entry level condominiums and new townhouse and apartment developments catering to move-down buyers ready to move out of their single-family homes.
Another fact is none of us knows what is really going to happen. Just look at the 2019 outlooks from the national and local real estate associations. While the BCREA reports the downward trend in B.C. home sales is largely behind us and starting to trend upwards, the CREA contradicts this by predicting a further decline in sales.
I am not expecting any significant increase in house prices, especially for single-family properties in the coming year. However, I am also not expecting a major crash in prices.
What I do believe is that housing affordability will remain a serious problem for both Vancouver buyers and renters one year from now.
There’s another thing about which I am quite certain. Many of us will be taking a much closer look at our property assessment notices when they arrive in early January. That’s because for the first time, “high-valued properties” will now be subject to the province’s so-called School Tax.
This is not to be confused with the school tax that has appeared on your regular annual property tax notice and charged to every property in B.C. regardless of whether you or your family use the public or private school system.That tax remains.
However, starting in 2019, an additional school tax applies to residential properties’ more than $3 million in assessed value.
The additional tax rate is 0.2 per cent on the assessed value between $3 million and $4 million, and 0.4 per cent on the residential portion assessed over $4 million. For those of you for whom math was not your best subject and fortunate enough to own a $4.5-million home, this translates into an additional $4,000 on top of your regular property taxes which last year would have been just over $11,000.
Now, if you own a home that is not your principal residence and not rented for at least six months of the year, you will be in for even more dramatic tax increases. That’s because you’ll have to pay the city’s so-called Empty Home Tax and the province’s so-called Speculation Tax.
On a $4.5-million home, the city’s tax will be $45,000 (that’s not a typo) and the Speculation Tax will be an additional $22,500 to $90,000 depending on whether you are a B.C. resident, a Canadian citizen who does not live in B.C., or someone who lives outside of Canada.
While many are applauding these additional taxes, I am not. For one thing, they are going to impact new housing supply in the coming years. This in turn will reduce the number of jobs in the construction industry as well as furniture and decorating sales, and so on.
Ironically, a housing slowdown will also reduce the permit fees, Development Cost Levies and Community Amenity Contributions to which the city has become addicted in recent years.
While on the topic of property taxes, I would like to remind readers of something from my Courier column of a year ago.
Homeowners facing dramatic tax increases due to Community Plan or zoning changes can often qualify for much lower taxes under Section 19(8) of the Assessment Act, which allows residential land to be assessed at less than market value where the owner occupied the property as their principal residence continuously for 10 years.
For some Marpole or Cambie Corridor bungalows, the reduced assessment and taxes may be less than half of what an investor would pay for an identical property.
To qualify for this tax relief, the owner should have submitted a completed application form to B.C. Assessment by Nov. 30. However, if you didn’t take my advice last year, contact the local B.C. Assessment area office as applications received until March 15 may qualify for processing through the assessment review process. Email me if you want more details.
Best wishes for an affordable 2019.
Twitter @michaelgeller
Posted by Michael Geller at 7:01 AM


We are group of certified hacker, we don't advertise our services, people testify our goodness for us.

Be rest assured that contacting us, your problems are already solved.

So if i were you i will just take my time and go through this little aim of ours.


NOTE: YOUR HAPPINESS IS OUR SUCCESS!!!

I'm a professional in all kinds of hacking services, which leads me into giving out a blank ATM card to all individuals & serious minded people only. I hack, clone ATM cards worth's the total sum of $500,000.00 United States Dollars, with this card you can withdraw the sum of $3500 as daily limit till you cash out the sum total said sum & this cards has been cloned & hacked in the manner that you'll never be caught not detected during usage. For more info, kindly email us: fastatmhackers@gmail.com OR Call/WhatsApp: +16626183756


GET RICH WITH THE USE OF BLANK ATM CARD FROM
(besthackersworld58@gmail.com)
Has anyone here heard about blank ATM card? An ATM card that allows you to withdraw cash from any Atm machine in the world. No name required, no address required and no bank account required. The Atm card is already programmed to dispense cash from any Atm machine worldwide. I heard about this Atm card online but at first i didn't pay attention to it because everything seems too good to be true, but i was convinced & shocked when my friend at my place of work got the card from guarantee Atm card vendor. We both went to the ATM machine center and confirmed it really works, without delay i gave it a go. Ever since then I’ve been withdrawing $1,500 to $5000 daily from the blank ATM card & this card has really changed my life financially. I just bought an expensive car and am planning to get a house. For those interested in making quick money should contact them on: Email address : besthackersworld58@gmail.com or WhatsApp him on +1(323)-723-2568