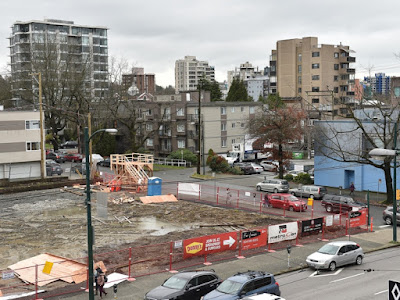 Given the urgent need for more rental housing, can a proposed purpose-built rental housing development at Broadway and Birch be too large?

This question was fervently debated on Twitter last week following my posting of a website created by some nearby residents — 28floors.com.

Before offering my answer, I should note that over four decades, I have sought many rezonings for larger buildings. I even contemplated buying the vanity license plate “REZONE” but thought better of it when I realized my car would be constantly vandalized.
Many of my rezonings were what planners call “spot rezonings” since they were not in accordance with an approved community plan.

In 1985, I upset Point Grey residents by rezoning three blocks between West Seventh and Ninth Avenues and Alma and Highbury Streets from single-family to multi-family for low-rise apartments.
A few years later, I angered many Cambie corridor residents by proposing a fourth 18-storey rental tower at Langara Gardens. While it was approved, a subsequent application for three more rental towers was rejected due to community opposition. Today there are plans for buildings up to 28 storeys on the site.

In 1995, many Oak Street area residents opposed my proposal for a four-storey seniors’ apartment at 42nd and Oak. It was eventually approved at three-storeys.

Two years later, a Kerrisdale neighbourhood opposed a three-and-a-half storey apartment at West 41st and Balaclava. Despite then-Alderman George Puil’s claim in the Courier that the building would be as obscene as Eaton’s large blank wall, today The Lanesborough sits comfortably in its surroundings.
Most recently, I rezoned a property at Capilano and Marine in North Vancouver, next to a Denny’s restaurant. Although the Community Plan called for an 18-storey limit, I requested approval for 23 and 19 storey buildings. They are underway.

Which brings us back to the Broadway Denny’s, where the purpose-built rental housing development has been proposed.
For decades, building designs along West Broadway have been controlled by the Central Broadway C3-A zoning and guidelines establishing a maximum height of approximately 12 floors and 3.0 FSR limit.
In early 2018, Jameson Development received rezoning approval for a 16-floor Secured Market Rental building containing 158 residential units. An increased 7.07 FSR was allowed.
However, given the Millennium Line Broadway extension, the developer now wants rezoning approval for an even higher 28-storey, 10.7 FSR building containing 262 market rental units under a new Moderate-Income Rental Housing Pilot Program that will come into effect in 2019.
On Twitter, I opined that notwithstanding the need for more rental housing, this building proposal appeared too big for its site context and should not be approved, especially in the absence of a new community plan.
I was immediately attacked — OK, challenged — by an organization called Abundant Housing and UBC professor Tom Davidoff and others, who questioned how I could possibly think any purpose-built rental building could be too big given today’s rental housing crisis and the coming subway. Why was I so afraid of tall buildings?
As this column’s introduction hopefully demonstrates, I am not afraid of tall buildings. However, I am concerned that too many very tall and dense buildings are being approved in the name of sustainability and affordability.
I wrote about this six years ago, which led to an SFU City Conversations debate “Where is big TOO big?”
Rezonings for larger buildings are often justifiable. One higher density building in a lower density neighbourhood might be fine. However, we need to think about the cumulative effect of 20 similar buildings. Or 40.
What will be the impact on views? Shadowing? Will the buildings be neighbourly? Are new parks planned? Will there be adequate school and community centre spaces? This is what a good, overall plan will address.
Too often I see politicians allowing large Community Amenity Contributions, or developer claims to be responding to the housing crisis, to trump good planning and design.
Architects and planners have a responsibility to speak out.
The city has already approved a purpose-built rental project at Broadway and Birch at more than twice the previously zoned density. That’s fine. But any further density and height increases should only be considered within the context of a new approved Broadway Corridor Plan.
@michaelgeller
geller@sfu.ca

Posted by Michael Geller at 2:39 PM

welcome to technechhacks where problems are been solved,

We deal with the total functioning of sites like


Thus Beware of scammers because most persons are been scammed and they end up getting all solutions to their cyber bullies and attacks by US.

I am Jason Williams one of the leading hack agents.

PURPOSE IS TO GET YOUR JOBS DONE AT EXACTLY NEEDED TIME REQUESTED!!

I'm always available for you when you need help.

Thanks for your time.

Access to computers and other control systems which might provide you with information about the way the world revolves around technology should be unlimited and total. All information should be free and accessible to all. That is why we at INTEGRATEDHACKS have come come up with a team of highly motivated and dedicated hackers to help you get access to information you are being deprived of. Our services include and are not limited to hacking of social media accounts,email accounts, tracking of phones hacking of bank cards and many more.
Have you ever been hacked? Need to recover your stolen account, Want to monitor your kids,spouse or partner, Change your school results track messages from an email or mobile number and many more, INTEGRATEDHACKS is the one for you. Hundreds of our clients have their phones, social media accounts, emails, servers, may bots and PCs hacked consistently and efficiently. Our professional hackers for hire team is highly qualified and can hack anything or device you desire without giving the target any form of notification which makes us one of the best.
Are you having doubts about your partner ? Worry no more. All your doubts would be cleared.