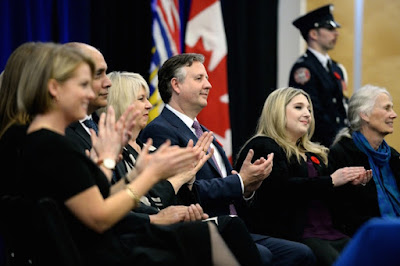 Mayor Kennedy Stewart used his inauguration speech Monday to outline how “respect” will be at the centre of his approach to working with a 10-member council comprised of four political parties as they focus on tackling Vancouver’s affordability crisis.

The 52-year-old former Burnaby NDP MP stood at a lectern and promised a crowd of about 250 people at Creekside community centre that he will inform councillors and residents of his intentions, and listen to their ideas before making decisions.
“It is up to all of us to serve as examples for our community and strive to foster an environment of openness and transparency with a goal of building trust across the city,” he said, as his wife Dr. Jeanette Ashe, mother Cathy and brother Evan listened from the front row. “I will do my best to live by these words.”
Stewart, who was elected Oct. 20 as an independent, leads a mixed council with five members of the NPA, three from the Green Party, one from COPE and another from OneCity, all of whom were sworn in by Judge Harbans Dhillon.
A diverse crowd, including former and current politicians from all three levels of government, police officers, firefighters, business executives, housing advocates and artists witnessed the inauguration, which included Stewart and councillors being piped in by a former VPD officer and entertained by the VPD’s lion dance team. 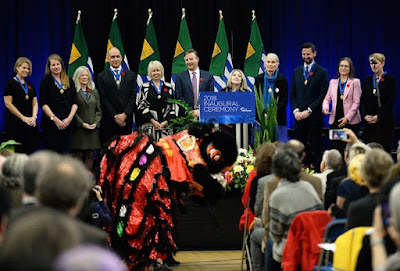 Guests included former premier Mike Harcourt, who was elected mayor in Vancouver in 1980 as an independent. Stewart said Harcourt’s time as an independent mayor provides “historical guidance” on how the next four years will go at city hall.
“Mike tells me such councils perhaps have the greatest potential for success, as all voices matter equally,” he said, noting Harcourt’s council also included his colleague, former Vancouver-East NDP MP Libby Davies, who was master of ceremonies Monday.
It was Davies who urged Stewart and the councillors to break through “partisan histories and traditions to find ways of learning and co-operating.” She said the “easy road” is to slide into hyper-partisanship, which Vancouver councils have a strong history of doing because of majority governments.
“We have high hopes for this new city council, and we wish you well,” she said. “Seek what unites you while respecting your adversaries, work in good faith for the greater good of our city.”
That greater good will be heavily focused on helping solve what Stewart called Vancouver’s “single greatest challenge:” the lack of affordable housing in Vancouver. He promised in his campaign to build 85,000 homes over the next 10 years, with 25,000 of those non-profit “affordable” rental homes and 25,000 purpose-built rental apartments and laneway homes.
“The consequences of our housing crisis ripples out into every part of our civic fabric,” he said. “It doesn’t matter who you are or where in this city you go, the stress of unaffordability hangs over Vancouver, stifling its creativity and energy and promise of opportunity. But it doesn’t need to be this way.”

He said each councillor “champions policies” that can help Vancouver “solve our affordability crisis and show the world it is possible to successfully address this problem.” He mentioned each councillor by name in giving examples of their commitment.
It ranged from Green Party Coun. Pete Fry ‘s promise to stand up for renters to NPA Coun. Colleen Hardwick’s “cutting-edge” public consultation to COPE Coun. Jean Swanson’s ongoing mission to help the poor and the addicted. The other councillors sworn in were Rebecca Bligh (NPA), Sarah Kirby-Yung (NPA), Lisa Dominato (NPA), Michael Wiebe (Greens), Christine Boyle (OneCity) and Adriane Carr (Greens) and Melissa De Genova (NPA), who were both re-elected.
Stewart said he wanted to build a Vancouver that leads the world in livability, “cultural production,” social justice, economic development, in tackling climate change, in fun and in “coolness.” While he continues to celebrate the election of eight women to council, Stewart acknowledged the council does not reflect the ancestral diversity of Vancouver.
He said he was deeply concerned that not one person of Chinese, South Asian or Filipino descent holds a council seat, which means more than 50 per cent of the population’s ancestry is not represented at city hall. He promised to do “everything I can to reach out to your communities and to make sure the decisions we make at city hall take your experiences and realities into account.”
He also pointed out there is no one of Indigenous descent on council, but that he will continue the work of the previous council on its reconciliation efforts with the urban Aboriginal community and the three local First Nations — the Squamish, Musqueam and Tsleil-Waututh — who were all represented at Monday’s inauguration in song and speech.
Stewart, who is on leave from Simon Fraser University as a public policy professor, cited his academic mentor, Dr. Patrick Smith, in explaining how Vancouver has a choice to make over the next four years on whether it wants to be a “globalized or globalist” city. 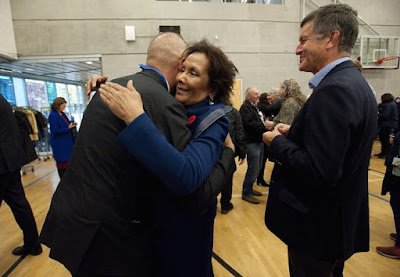 “Globalized cities are held hostage by external forces that shape civic policy and international standing—they are ships foundering in stormy seas,” he said. “Globalist cities develop proactive strategies and become significant players in shaping how the world works. They have the wind at their backs and set the course which others follow.”
He said Vancouver has been “globalist” in the past by embracing and celebrating multiculturalism and the LGBTQ community, championing the four-pillars drug strategy and leading the way on protecting the environment.
But, he said, it is a difficult feat to return to a leading city when it is beset by a volatile world economy, rising inflation and interest rates, housing speculation, a widening gap between rich and poor and a flood of deadly opioids poisoning residents.
“We can and must be a globalist city,” he said.

Posted by Michael Geller at 6:07 PM

Right off the bat, we need to state that our charges will be settled and failing to barge about charges in light of the fact that our normal clients realize that we just give quality Doha Escorts