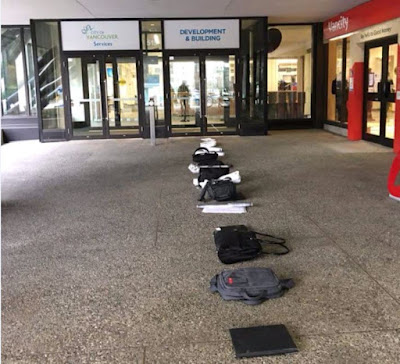 Why is housing in Vancouver so expensive? The answer depends who you ask.
While most acknowledge our region has a constricted land supply due to water, mountains and the Agricultural Land Reserve, many believe the fault lies with foreign buyers, especially from China, and the thousands of homes they leave empty.

related
Others blame speculators who buy and flip pre-sale condos and properties as if they were playing a game of Monopoly.
Increasingly we are told there is an imbalance between supply and demand. However, more supply on its own does not appear to be the answer. One only needs to look at the record number of condos under construction without any apparent price reductions.
My colleagues in the development community believe a major problem has been the complex and time-consuming approval system.
Last November, an early morning photo appeared on social media. Taken outside Vancouver’s Development and Building department, it revealed a row of architectural drawings and brief cases lying on the pavement.
The owners were nowhere to be seen. They were off keeping warm somewhere. The plans and cases were place holders, so their owners could hopefully submit permit applications that day.
I thought of this photo last week when I received a Vancouver Communications department press release.
Headlined “New measures implemented by City Hall within the last year to speed up the delivery of new housing and streamline planning and development processes in Vancouver are showing results,” the release went on to report:
The release added that more improvements were to come, including policy changes to create greater transparency and simplified regulations.
While architects, builders and developers have often criticized the city for its unnecessarily complex and lengthy approval process and Vancouver city staff, especially Kaye Krishna, general manager of development, buildings and licensing, deserve recognition for their success in reducing processing times.
Faster approvals should help reduce the cost of housing, especially if the province’s proposed so-called speculation tax and school tax apply to residential development sites awaiting approvals.
(I can’t help but smile at the irony that by adding costly taxes, the province claims to be improving housing affordability.)
However, the Lord giveth, and the Lord taketh away.
Shortly after receiving the city’s press release on reduced processing times, I received a draft council report proposing increased Community Amenity Contribution (CAC) rates.
For those not familiar with the term, CACs are contributions provided by property developers when city council grants development rights through rezoning. CACs fund park space, libraries, childcare facilities, community centres, transportation services and cultural facilities.
They are in addition to Development Cost Levies (DCLs), which are also paid by property developers, based on square footage, to help fund parks, childcare facilities, social and non-profit housing, and engineering infrastructure.
For a six-storey building along the Cambie Corridor, the CAC will increase from $68.18 to $115 for each square foot of additional floor space approved by rezoning.
(I tip my hat to the city staffer who determined $68.18 would likely be more palatable for some Cambie Corridor developers than $64.14.)
I question whether these charges increase the cost of housing. City staff and politicians believe not, since their consultants have told them CACs simply reduce the price developers will pay for land.
Developers disagree but agree to make these payments as long as their cost can be passed on to future buyers.
The fact that developers are prepared to pay $11 million for single-family lots along the Cambie Corridor proves to me land prices are not being reduced by CACs.
Given these land costs, increased CACs, DCLs, and a proposed new Utility DCL to come into effect in September 2018, combined with escalating construction costs, interest rates and “soft costs,” developers are gambling they can find buyers willing to pay at least $1,500 per square foot when they go to market.
we ask why housing is so expensive in Vancouver.
Twitter