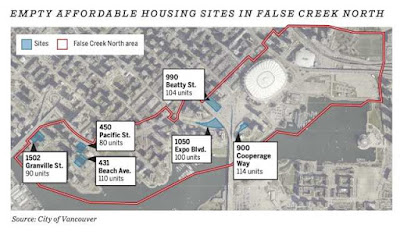 While I didn't write this story, I feel partially responsible for it.
During the recent debate about the forthcoming North-east False Creek development, much was made of the city's promise to include significant affordable housing. This prompted me to comment that this was a noble goal, but before getting too excited about these units, what about the 6 empty social housing parcels lying fallow along the North Shore of False Creek?
I knew about these parcels because I was given a tour of them by Concord Pacific during the 2008 municipal election. Furthermore, I was involved as an expert witness in a lawsuit over them a few years ago. Following my comments, Lori Cuthbert contacted me. I happily put her in touch with Cameron Gray, who was the City's Housing Director, and while not directly involved in the acquisition of these sites, knew why they remained undeveloped.
I told Lori that I thought it was outrageous that these sites remained undeveloped, not as a criticism of Concord Pacific, but rather of the city, province and feds who could have come up with a strategy to see these parcels developed with affordable housing, even in the absence of deep government subsidies. Enough said.
http://vancouversun.com/news/local-news/three-decades-ago-six-big-lots-in-vancouvers-trendy-false-creek-were-reserved-for-affordable-housing-they-remain-empty-today-will-these-600-homes-for-families-and-seniors-finally-be-built

Posted by Michael Geller at 3:56 PM