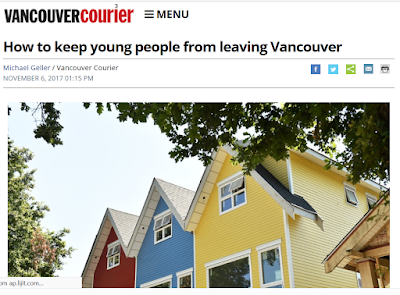 While much is written about our region’s affordability crisis, Barrett’s poignant tale about returning to Alberta after many years in Vancouver seemed to hit a nerve with many — myself included.
While most millennials could relate to Barrett’s difficulties finding decent, affordable housing where she might ultimately raise a family, not everybody was sympathetic.
Many commenters thought she should lower her expectations, or move to the suburbs, and stop whining. I disagree.
Barrett’s article prompted me to think about what might realistically be done to keep more young people in our city.
While imposing a 15 per cent Foreign Buyers’ Tax temporarily dampened the price of West Side single-family houses, it isn’t going to benefit people like Barrett.
Similarly, the Empty Home Tax might bring expensive rentals to market, or prompt owners of second homes to list their properties for sale. But this won’t help either.
Rezoning land for condominiums will be beneficial in the long term. However, as recent statistics reveal, new condos are not the solution.
In October, it was reported the average sales price of a new Vancouver condominium hit a record high of $906,650. This equates to $1,045 a square foot and a 17 per cent increase on a year-over-year basis.
In the long term, the province’s promise to build 114,000 affordable rental housing units over the next 10 years will most certainly help, if fulfilled.
But what can be done in the shorter term?
As a university student in Toronto and Manchester, I shared larger houses with other people. While some had rooms with private bathrooms, most of us shared bathrooms and living spaces.
In Vancouver, sharing a house with unrelated people is becoming an increasingly popular choice for those who can’t afford a $1,500 to $2,000 a month apartment. However, it can be illegal.
Currently, Vancouver has a bylaw that limits the number of unrelated people who can live together to five. While this may be appropriate for smaller homes, larger houses could accommodate more. For this reason, it may well be time for city politicians to revise this bylaw, especially if they want to fill up large vacant Shaughnessy mansions.
While some millennials will settle for just a room, many more would prefer a self-contained suite in a house. Throughout Vancouver, formerly single-family houses have been subdivided into studio, one-bedroom and two-bedroom suites. However, in most cases this is illegal.
City officials close their eyes to these situations until there is a complaint. This is not the answer. We need a better solution.
During the recent byelection, there was considerable discussion about the need to create more affordable housing choices in single-family neighbourhoods, in addition to legalized basement suites and laneway houses.
I think the time has come to change zoning regulations in many RS-1 neighbourhoods to permit houses to be legally divided into multiple suites.
In 1972, I lived in Ottawa’s Pestalozzi College, a Trudeau government-funded highrise experiment in cooperative living. Torontonians will remember Rochdale College, part of the same failed experiment.
However, what made Pestalozzi College unique was its design. Half the building comprised communal suites of varying sizes offering partially furnished bedrooms, shared bathrooms and living areas with kitchens, not unlike some student residences.
The other half offered one-bedroom apartments. However, these apartments differed from typical Vancouver one-bedroom apartment designs since there was a lockable door to the living room. As a result, they were easily shared by two unrelated people.
At SFU’s UniverCity, the Cornerstone building is designed with similar flexible one-bedroom suite layouts, thus offering more affordable housing choices. More apartments should be designed like this.
It is now time for Vancouver to allow additional shared living arrangements in single-family zones. City officials should also zone more land to allow alternative communal living arrangements, especially co-housing developments.
Sadly, it is too late to keep Jessica Barrett in Vancouver. Hopefully more shared affordable housing choices will keep others from leaving in the future.
@michaelgeller
geller@sfu.ca

http://www.vancourier.com/opinion/how-to-keep-young-people-from-leaving-vancouver-1.23085557
Posted by Michael Geller at 10:39 AM

Great & Knowledgable article has shared by you...
Real Estate Developers in Lucknow, Plots in Lucknow

Find your next home from our 1-bedroom, 2-bedroom Apartments For Lease in Vancouver, WA. Pet-friendly rental units with modern comfortable amenities. Apply at TheUptownApartments Now!