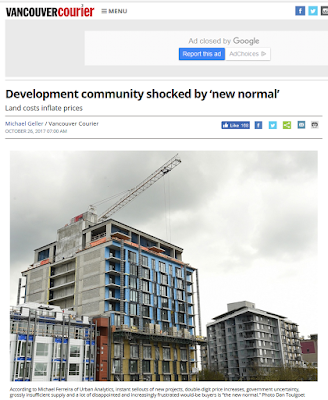 Last week, members of Vancouver’s real estate and development community squeezed into a crowded downtown hotel ballroom to hear some astounding statistics about housing affordability around Metro Vancouver.
The occasion was the annual Urban Development Institute presentation by Michael Ferreira of Urban Analytics, a consulting firm that advises developers what to build and what they can charge for new developments.
Most attendees were shocked by what Ferreira described as “the new normal.” He told of instant sellouts of new projects, double-digit price increases, government uncertainty, grossly insufficient supply and a lot of disappointed and increasingly frustrated would-be buyers.
There were audible gasps in the room when Ferreira reported on price increases he has observed around the region. Between 2015 and 2017, the average price of a Metrotown highrise apartment increased from $700 to $1,100 per square foot. Surrey apartments increased from $330 to $550 per square foot. Richmond apartments increased from $490 to $790 per square foot. This was just over a two-year period.
Ferreira remarked that if he had predicted these price increases two years ago, people would have laughed him out of the room.
In terms of absolute sale prices, the audience was astonished to be told new 475-square-foot Mount Pleasant apartments were selling for $740,000, 435-square-foot apartments in Joyce/Collingwood had sold for $735,000 and new 600-square-foot apartments in Surrey Centre were selling for $480,000.
We hear a lot of talk about the assignment or flipping of pre-sale contracts. Ferreira’s statistics help explain why it is happening. Metrotown apartments originally selling for $595 per square foot were reselling for $1,082 per square foot.
That is an 82 per cent increase during the period when the buildings were under construction.
Meanwhile in Richmond, assignments of agreements to purchase woodframe apartments increased 59 per cent from $435 to $691 per square foot between the time the buildings first went on sale and completion.
One of the reasons housing prices have increased so dramatically is increased land prices. Just as meat is priced by the kilo or pound, development sites are priced per square foot of buildable area.
In the mid-1990s, many of my colleagues thought I over-paid when I purchased a Kerrisdale gas station at Larch and West 41st for $85 per square foot to build Elm Park Place. According to Ferreira, given extremely limited supply, current prices for a West Side multi-family site are $650 to $750 per square foot.
On this basis, just the land cost for a small, 850-square-foot two-bedroom apartment is approximately $700,000. Add in construction costs, consultant fees, financing, marketing costs, city permits, and developer’s profit, and that apartment must sell for at least $1,500,000.
Many question who can afford these prices. Is it just foreign buyers? Ferreira thinks not.
While reporting that 1.4 million multiple-entry visas were issued to Chinese nationals over the last three years, many of whom bought property in Vancouver, he also noted that Metro Vancouver residents 55 and over had accumulated $252 billion in mortgage-free equity in their homes.
Many are using this equity to help children and grandchildren purchase housing.
Ferreira was critical of Mayor Gregor Robertson’s recent “locals first” proposal, which he described as political meddling, not an initiative to improved housing affordability. I must agree.
Furthermore, I question whether the city could impose such a condition on developers unless a property is rezoned; and the last thing we need is more time-consuming and expensive rezonings. The enforcement of such a requirement could also be a nightmare.
A better approach is for the city to zone more land for affordable forms of housing and speed up approvals.
Experience has demonstrated that those cities with the most complex approval procedures have the most expensive housing. Ferreira urged Vancouver’s mayor to follow the lead of San Francisco Mayor Ed Lee who recently issued an executive directive to reduce by half the time it takes to obtain approvals for new homes in San Francisco.
Ferreira does not expect the price increases witnessed over the past two years to continue. However, if all we get is higher taxes and more complex, ill-considered municipal regulations, they might.
@michaelgeller
Posted by Michael Geller at 8:44 AM