Opinion: Why are single family homes sacred? Vancouver Courier May 24, 2017 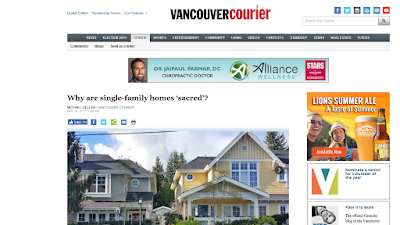 The panel at a recent talk was also asked what are we trying to protect when it comes to single-family zoned areas. Photo Michael Geller
Why do so many people continue to protect the sacred single-family home? This was the question posed last week by four young, forward-looking municipal councillors to an audience gathered in a North Vancouver District public library. The event was the third in a series of discussions called Metro Conversations.
Each Metro Conversation brings together a broad panel offering different perspectives. I was invited to share the perspective of an architect and developer.
The first Metro Conversation looked at the prickly topic of regulating Airbnb and other similar vacation rental programs, since they are having a significant impact on the supply of rental housing, not just in Vancouver, but in cities around the world.
The second conversation looked at ‘purpose-built’ rentals. How do we ensure that people at different income levels have access to rental housing they can afford, and how can we ensure that the rental housing stock in our region is kept in a state of good repair?
At last week’s discussion, I was joined by local resident Krista Tulloch, who had served on the North Vancouver District Official Community Plan Implementation Committee, Cameron Maltby, a custom home designer, and planner and educator Neal LaMontagne.
North Vancouver District councillor Mathew Bond, who organized the event, noted that like all communities in Metro Vancouver, his municipality’s residential areas are largely dedicated to single-family housing. He questioned whether they were limiting the opportunity for more affordable housing options in North Vancouver District and elsewhere around Metro Vancouver.
The panel was also asked what are we trying to protect when it comes to single-family zoned areas. We generally agreed that for many, neighbourhood character is most important. In single-family neighbourhoods, this is often seen as the size of houses and setbacks, and the amount of landscaping, green space and trees.
However, it was noted that neighbourhood character is also a function of resident composition. Are there children playing in the streets and front yards? Are there people walking along the sidewalks? Is there a sense of community or are too many houses vacant?
The topics of housing affordability and density then came up.  All panelists agreed that neighbourhood character can be preserved while increasing density to provide more affordable housing options. Examples included front-and-back or side-by-side duplexes designed to look like larger houses, laneway or coach houses, townhouses, and even small apartment buildings.
In most municipalities, obtaining approval to build these types of in-fill housing is often too difficult. It is so much easier to simply build a large, new single-family house. Local governments therefore need to update their policies and bylaws to allow greater housing choices.
However, with single-family lots selling for $1.5 million or more, even if zoning approvals can be more easily obtained to allow these forms of housing, the resulting housing is not going to be affordable for those earning modest incomes and struggling to find a home.
I offered, as an example, that even if a single-family lot could be rezoned for a 10-suite apartment building, the land cost per apartment is likely going to be hundreds of thousands of dollars, with construction and other ‘soft costs’ on top of that.
Not surprisingly, the topics of traffic and parking also came up. It was the panel’s consensus that as public transit improves and areas become more walkable, even if densities increase, the amount of required parking may turn out to be less. This would be particularly true if neighbourhood corner stores, schools, and small childcare facilities could be integrated with new housing.
Is this likely to happen?
I am more optimistic today than I was 30 years ago when I first started to rezone single-family properties for new housing choices. Why?
Because many of those who opposed rezonings at that time are the ones now seeking smaller houses, duplexes, townhouses, and small apartments in their neighbourhoods.
Metro Conversations series is being organized by Nathan Pachal of the City of Langley, Kiersten Duncan of Maple Ridge, and Patrick Johnstone of New Westminster, in addition to Mathew Bond, with financial and logistical support from SFU Public Square and other community organizations.


We need more politicians like them.
geller@sfu.ca
@michaelgeller
Posted by Michael Geller at 3:33 AM