As Samuel Goldwyn once said, it is not wise to make forecasts, especially about the future. Nonetheless, I am delighted to review my past Vancouver Sun housing forecasts and offer a few more as we enter 2017.

In the coming year, I foresee changes in zoning, a focus on heritage homes and new proposals for rental housing — but more on that in a minute.
My first year-end column was written 10 years ago as I set off on an around-the-world sabbatical. Titled “Affordable housing rises on wise use of land,” it urged municipal planners to allow row houses and apartments to replace single-family houses along such arterial roads as Oak Street.
It also promoted reduced parking standards to facilitate redevelopment of parking lots and rezoning of single-family lots to permit alternative housing forms, including back-lane homes, duplexes and triplexes.
Today, there are indeed new multi-family developments along several Vancouver arterials, including Oak, Cambie, Granville and King Edward. Sadly, however, new single-family homes continue to be being built along major transit corridors throughout the region. Not a wise use of land.
A 2012 year-end article offered 10 predictions for 2013. These included an increased popularity of car-sharing and a corresponding reduction in minimum parking requirements.
New provincial legislation requiring depreciation reports on the condition of condominium projects was expected to result in concerns about the future of many older projects requiring significant repairs.
Other predictions included an increased interest in fee-simple row houses, affordable micro-suite developments, and modular housing. While car-share programs did become more popular, I was wrong about an increased interest in fee-simple row houses and micro-suite developments. However, a container-housing development did get underway in the Downtown Eastside. 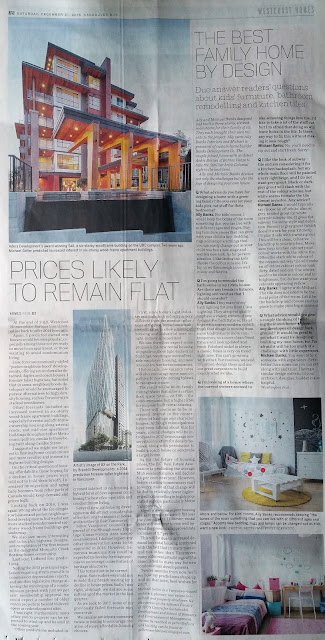 At the end of 2013, Westcoast Homes editor Barbara Gunn invited me back to offer 2014 forecasts. Again, I predicted owned row houses would become popular, especially among those not yet ready to move to an apartment, or those wanting to avoid condominium living.
I also forecast community-styled “pocket neighbourhood” developments, offering a mix of smaller detached, duplex and coach houses. I foresaw taller highrises, but noted that in some neighbourhoods, developers would be encouraged to pursue alternative to high-density housing, such as Toronto-style stacked townhomes.
Other forecasts included an increased interest in six-storey woodframe apartment buildings, especially for rental and affordable ownership housing along arterial roads, and mid-rise apartment buildings throughout other Metro municipalities, similar to those being built along Cambie Street.
I suggested we might see interest in floating home communities and more creative and innovative highrise building designs.
On the critical question of housing affordability, those hoping for a decline in house prices were told not to hold their breath. Increased immigration and aging baby boomers from other parts of Canada would keep demand and prices high.
Looking back on 2014, I was again wrong about the fee-simple row houses and pocket neighbourhood developments, but we did see more stacked townhomes and six-storey woodframe buildings get underway. We also saw more interesting and colourful highrise designs, and completion of the first homes in the delightful Mosquito Creek floating-home community.
Last year, I offered four predictions. Noting the 2013 provincial legislation requiring strata councils to commission depreciation reports, and another legislative change allowing the winding up of a condominium project with just 80 per cent membership approval, we could expect a number of older condo projects to be sold to developers as redevelopment sites.
I was right. Furthermore, many other condo projects can be expected to wind up and be sold in the coming year.
Other predictions included increased interest in co-housing, a hybrid form of development combining the best of co-operative and condominium living. Several new co-housing developments did attract considerable attention, one for seniors in Sooke, and another in East Vancouver.
Since Vancouver council’s approval of the Shaughnessy Heritage Conservation Area was so controversial, I did not expect any other conservation areas to be approved in 2016. However, numerous municipalities could be expected to develop heritage policies to encourage conservation of heritage structures. This turned out to be correct.
Again, Sun readers were told not to hold their breath waiting for a decline in house prices. Sadly, I was right, although we did see some softening of the market in the last quarter.


As we look to 2017, some of my previously failed forecasts may come true. We can also anticipate some new twists in zoning to encourage creation of more affordable housing choices. Firstly, since today’s light-industry and high-tech industry is very different from the noxious industries of the past, some municipalities will agree to allow a mixing of housing and industrial uses on light-industrial zoned land.
We can therefore expect some proposals for new rental housing alongside or above light-industrial buildings, resulting in more affordable employee housing, and new revenue sources for the companies.


Historically, low vacancy rates will also encourage some municipalities to rewrite zoning bylaws to recognize tenure. The result will be multi-family zoning bylaws that allow a certain floor space ratio — or FSR — for condominiums, but a higher FSR for purpose-built rental housing.
There will continue to be increased interest in the conservation of heritage and character houses. Although municipalities have been talking about this for years, zoning changes will be introduced in 2017 to encourage conservation in return for density bonuses, along with permission to build a coach house or subdivide a larger home.
As for the future of housing prices, the BC Real Estate Association is predicting the average MLS residential price will decline 6.4 per cent next year. However, before existing homeowners start to worry, most of that change will be due to relatively fewer higher priced homes selling in highly populated regions, particularly Metro Vancouver.


My view is we can expect housing prices to remain relatively flat over the coming year. However, rental rates will continue to rise well beyond the provincial approved rate increase of 3.7 per cent.
This will be due to increased demand for rental housing, combined with the fact that in many municipalities other than Vancouver, many older rental buildings will be demolished to make way for new condominium developments.


Twelve months from now, we’ll see how my predictions shape up. And on that note, best wishes for 2017!
Posted by Michael Geller at 12:11 PM

To locate a best apartment or houses for rent – and to make the interest go smoother. While leasing can seem like an adulthood trial by fire, it is truly a lesson in commitment. By completing your work and amassing the right documentation ahead of time, you know precisely what you can spend and what's in store in the midst of the technique.