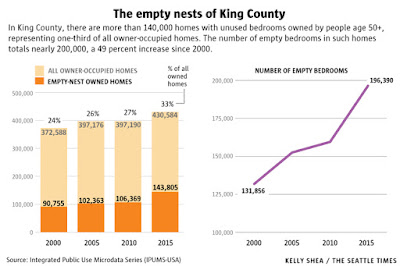 A few weeks ago, I received a phone call from Gene Falk, a Seattle journalist who writes a regular column called FYI or For Your Information. Readers ask him to check up on different facts. Given Seattle's housing shortage, one reader wanted to know how many empty bedrooms there were in King County. In undertaking some research, Mr Falk came across one of my Vancouver Courier columns, and other writings since I too have often thought one way to address the housing shortage in Vancouver is to make better use of empty accommodation.

However, rather than impose a tax, which the Mayor has done, I think we needed a better system to match those looking for housing, with those who have empty rooms.

I also think we needed to rethink why we allow single people to occupy 2 and 3 bedroom social housing units, and why we encourage empty-nesters to stay in larger homes, rather than encourage them to move into more suitably sized accommodation.

I intend to write more about this in the future. But in the meanwhile, below is Mr. Falk's Seattle Times column that he


King County’s surging number of empty nesters — people over 50 living in homes with no children or extended family — adds up to lots of empty bedrooms. Could the estimated 200,000 bedrooms with no one sleeping in them help alleviate the county’s housing shortage?
Share story
Ever wonder how many empty bedrooms there are in King County homes? Me, neither. But one Seattle Times reader did.
“This came to mind as I figure out what to do with my 4 bedroom home as I approach retirement,” the Woodinville widower, who asked me not to use his name, explained in an email. “I like living here, but couldn’t afford to stay in the area if I sell out.”

On the one hand, he noted, there is a shortage of affordable housing in the Seattle area. On the other, there are lots of empty nesters, like himself, who could benefit from a little extra rental income.
So I looked into it. Turns out, not only are we awash in empty-nest homes, but the number has spiked sharply in the past 15 years.

Got a question for FYI Guy?
If you have a question about the Seattle area or Washington that could be answered with data, send it to Gene Balk, gbalk@seattletimes.com.

Using census data, I calculated the number of owner-occupied King County homes that are likely empty nests — that is, the homeowner is age 50 or older, there are no children or extended family currently living there, and the home has three or more bedrooms. The total: 144,000 — that’s one-third of all the owner-occupied homes in the county. About 62 percent are owned by married couples; the rest have a single occupant.
If you start counting at the third bedroom, these homes combined contain nearly 200,000 bedrooms with nobody sleeping in them.

The number of such homes has increased by nearly 50 percent since 2000, when they made up less than one-quarter of owned homes in the county.

The rise in empty-nest homes is a byproduct of the massive baby-boom generation, now aging into their 50s and 60s. As I reported recently, 100 percent of the growth in King County homeownership since 2005 has occurred among people 55 and older, who now represent nearly half of all homeowners.

The irony of this glut of empty bedrooms in the midst of a housing shortage is not lost on Michael Geller, an architect and planner in Vancouver, B.C., where the housing situation is similar.
“I’m 69. I live in a 5 bedroom house. My wife and I occupy one room … On my street alone, there’s 37 houses and there’s probably 100 empty bedrooms,” Geller said. “It got me thinking, surely there must be a way to match all the people looking for housing with all these empty bedrooms.”
More Data Stories
Geller recently proposed this idea for Vancouver. While it hasn’t gained much traction there, he notes there’s been a lot of discussion around seniors in “under-occupied” homes in the U.K., where there is also a severe housing shortage.

For people who live in public housing, the British government has imposed a “bedroom tax” on unused rooms. It is also considering steps to incentivize older people who own large homes to move out, thus making way for younger families.

“In Vancouver, we take the opposite approach,” Geller said. “We make it easy for seniors to stay in their houses through a tax-deferral program.” Washington has similar tax-relief programs for lower-income senior homeowners.

The idea of older homeowners taking in tenants already exists, to some degree. For example, people who own homes near universities sometimes rent out rooms to students. And more recently, homeowners are turning spare rooms into profit through Airbnb, which is used for short-term visitors.

For some older homeowners, a longer-term tenant might be preferable. In addition to a stable source of income, a younger tenant might be able help out around the house. Taking in a boarder could also alleviate the social isolation felt by some seniors who live alone.

“Renting out a room to a complete stranger would be troublesome to some people,” Geller said. “But not to everybody.”
Gene Balk: gbalk@seattletimes.com or 206-515-5052. On Twitter @genebalk
Posted by Michael Geller at 10:52 AM

Applying for the apartment is a lengthy procedure with several steps for both you and your potential landlord will need to take. Keep your rental application questions concentrated on the right objective seeing whether the individual is fit the bill for the rental apartment.