Development open houses should reveal more details
Story boards and illustrative panels don't reveal enough about look of projects
Given the number of holiday receptions and office parties taking place, it’s beginning to feel a lot like Christmas, or Chanukah, or whatever you celebrate this time of year. However, for some strange reason, the past two weeks have also been a time for three City of Vancouver planning department open houses: the proposed redevelopment of Langara Gardens, the much-awaited rezoning proposal for the Little Mountain property, and 555 West Cordova St., the parking lot next to the former CPR Station where the so-called origami tower was rejected earlier this year.

Much will be written about these important developments over the coming weeks and months. However, as I wandered about the open houses, I was troubled. Despite the many elaborate story boards and illustrative panels, I really could not tell what these projects would look like if approved, and wondered how the public could be reasonably expected to comment. Here is what I did find.

The Langara Gardens complex is located west of Cambie Street between 57th Avenue and the lane south of 54th Avenue. In 1987 my company rezoned it for a fourth 18-storey rental tower on behalf of its then owner, the late Morris Wosk. The current owners are Concert Properties, one of Canada’s most respected development companies, and Petersen Group. Their architect is James Cheng, a colleague and friend, who has designed many of the city’s most beautiful developments.

This open house, the second organized by the planning department in a $700,000+ planning process, is to help develop a policy statement to guide the future rezoning of the property. There was a lot of information on display, including three “planning concepts” on which the public was asked to comment. However, two things troubled me.

The three concepts were essentially the same. Each contained a similar amount of development in lowrise (three to six storeys), midrise (up to 20 storeys), and highrise (up to 28 storeys). Moreover, the 3-D drawings and site plan diagrams on display gave no indication what a future development might look like.

If you are questioning whether a 20-storey building is a midrise, you are right. If you are wondering why 28 storeys, city council approved this height for the adjacent Pearson hospital site. 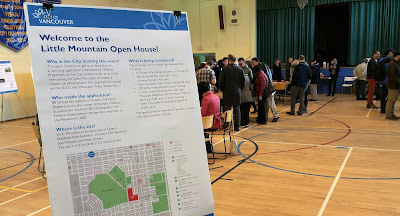 I was more troubled at the Little Mountain open house where the proponent Holborn and its design team has finally submitted a formal rezoning proposal.


The latest plan calls for 1732 housing units along with an array of community amenities — 234 of the units replace the social housing formerly on the property. While some are criticizing the plan for not having enough social housing, the purchase price, rumoured to be between $200 and $300 million, will be used by the Province to fund other social housing projects.

Many bird’s-eye drawings and diagrams were on display. However, there was nothing to show the public what this development will actually look like when viewed at street level. The planners justified this by saying it is just a rezoning; the detailed drawings can come later. I disagree.

With today’s computer graphics it is surprisingly easy to prepare realistic drawings of how a project will look. The city should ask Holborn and IBI Architects to prepare illustrations, prior to rezoning, so everyone can see how this large development will appear when viewed at street level along Main Street and elsewhere around the site. I am hoping it will look better than when viewed by a bird. 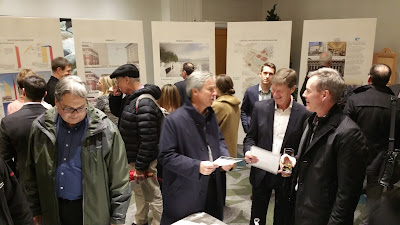 At the 555 West Cordova open house there was no specific building design on display. This time I did not object, since the proponent and city have decided it is important to reach agreement on key design principles for this strategic “Hub” site at the gateway to the waterfront, before designing the building.

However, I worry that any building design that incorporates unused square footage from the CP Station site will be too large for this small, publicly cherished lot. I therefore urge the city to encourage the developer to transfer a significant portion of the building density to its other properties, so that the new building can better fit with its heritage surroundings.

Extensive information about the Langara Gardens and Little Mountain proposals is available on the City of Vancouver website www.vancouver.ca.
Posted by Michael Geller at 2:42 PM