On Saturday morning I took the new train from the new Adler Train station up into the mountains. I know everything was new since the escalators were still being installed and very little English signage was in place. 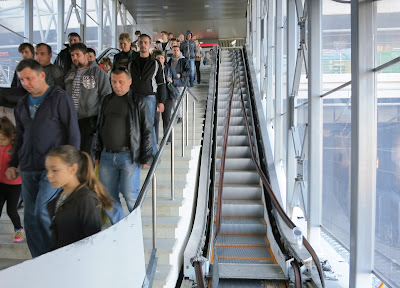 However, I eventually figured out where to buy a ticket and which gate to go to thanks to a very helpful attendant. In a country where everything seems quite expensive, I was astonished to discover that the train fare (140 R) for the 45 minute trip (soon to be 20 minutes) was about half the cost of a large capuccino. 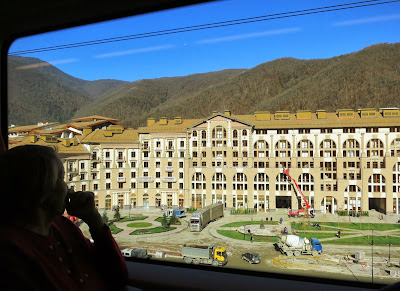 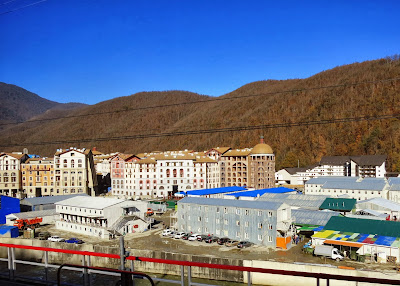 As the train slowly approached the final Krasnaya Polyana station I couldn’t really believe what I was seeing. An entirely new town was under construction, with an overall architectural style that might best be described as half Venice, half Moscow and half Nouveau Riche!

Almost by magic, Mr. Kuznetsov was standing on the platform right in front of me as the doors opened. “Welcome Michael”, he said, and I’m glad he did because in his Mercedes baseball cap and green ski jacket, it took a fraction of a moment to recognize him!  I was literally whisked away into a waiting Land Cruiser and so began one of the most remarkable days of my life. 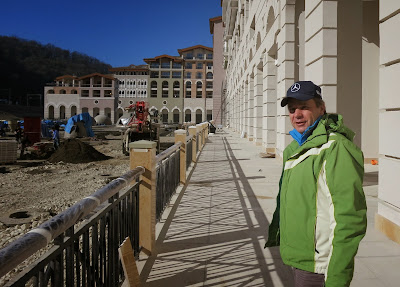 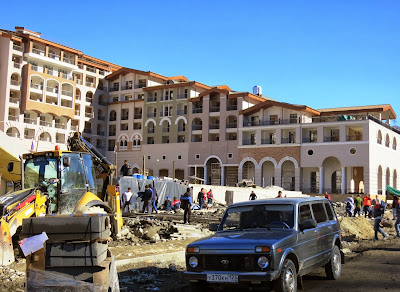 For the rest of the day I was taken around the new mountain facilities including what seem like two new towns being built at the +540M level and the +960 level. While various private companies are involved, Sberbank is playing a very major role in the project...not just as a banker but also as a developer and partner in development. 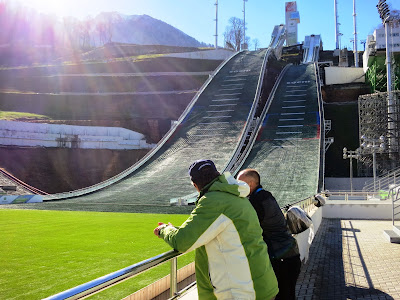 I was taken from the bottom, to the dizzying top of the ski jumping facility from where I gently leaned over to take a photo. 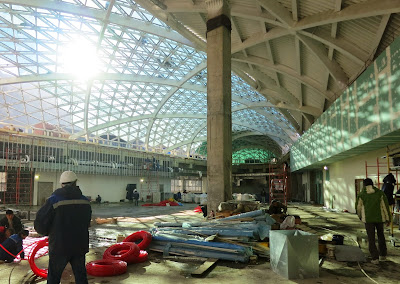 I went through a luxurious new shopping centre still under construction. It too is being developed by Sberbank in partnership with another Russian company.  At the top floor, a giant glass roof, the first of its kind in Russia, will cover a recreation area with restaurants, swimming pools and an expansive beach built from white sand brought in from the Maldives. 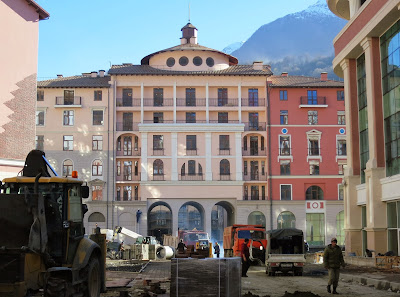 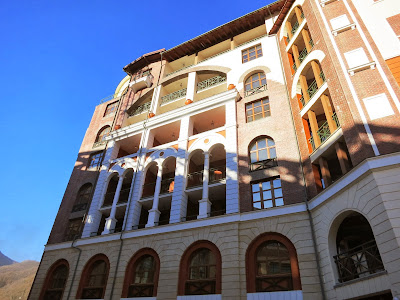 I met the Macedonian Project Manager for the main construction company who astounded me by telling just how quickly the new developments have gone up. I told him that if we were in Canada it was questionable whether some of these projects would be finished by February 2015, let alone 2014. 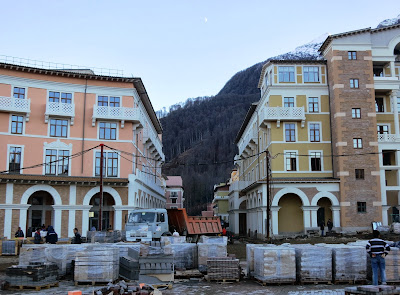 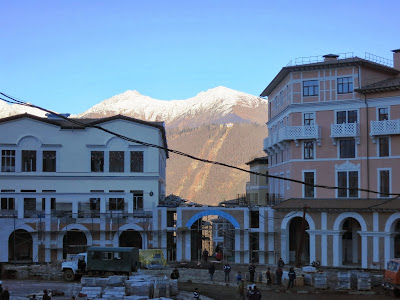 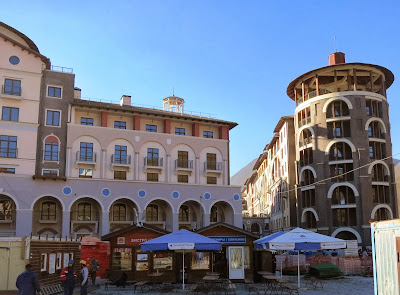 The coordination challenges were unimaginable, especially given the remote mountaintop locations and winter construction conditions. 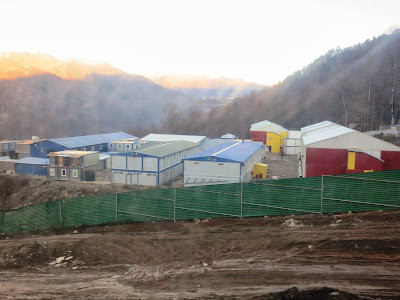 He told me there had been 16,000 workers on site at one time, but now there were about 10,000. Next week he’s taking delivery of 3400 TV’s for the 3400 hotel rooms that have been built in less than a year and are now ready for furnishings. 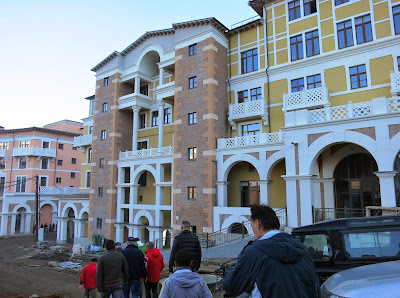 I asked him what he did before started this project. He told me he oversaw construction of The Palms in Dubai!  This guy appreciates the challenges of large complex projects.
I must have travelled up and down a dozen chair lifts as we moved about the site, including a stop at the 2200 metre level for glasses of malted wine followed by vodka and herring. 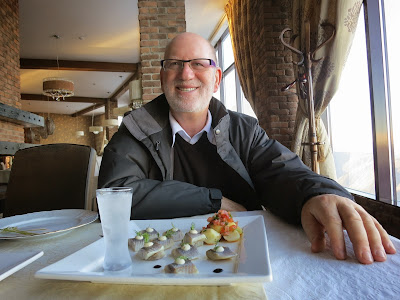 At 6pm, as Mr. Kuznetsov set off for another 5 hours of meetings, I was driven back down to Adler along the new road which had been built for the Olympics but was still closed to the public.It didn't take very long.

In three months, we will all be watching the Olympics on TV. We’ll be shown dramatic camera shots of all these facilities but few will know just how much effort has gone into making this all happen…hopefully on time. In April, I look forward to returning to Sochi to see first hand how it all looks in a completed state.

It is amazing just how much has been purpose built for these Olympics, and how much remains to be done. But then again, we’re told that the Vancouver Winter Games cost about $2-billion. The Russian government initially estimated that it would cost $12-billion to stage them in Sochi. That spiralled to $30-billion and is now estimated at $50-billion.  I'm hoping for a lot of Russian medals, although not Ice Hockey Gold!
Posted by Michael Geller at 4:17 AM

Did you know you can create short links with Shortest and receive dollars for every visit to your shortened urls.

The best counterfeit grass for pooches you get at Artificial Dubai is light and benevolent to your canine paws. Your textured companion will without a doubt have an incredible time running and playing over it securely. The grass cover for mutts like is effectively accessible at Astro Turf Dubaiat reasonable rates.For more points of interest: http://artificialgrassdubai.ae/