Density in the name of Sustainability and Affordability REDUX

DENSITY in the name of SUSTAINABILITY and AFFORDABILITY 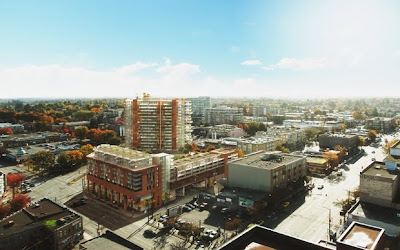 "What the hell is going on in this city?"

This is the question asked of me earlier this week by someone looking at the developer's illustration in the Vancouver Courier of the proposed Rize Development at Broadway and Kingsway "It just looks too big!" she said.

Two weeks earlier I had a call from someone concerned about a proposed new development in the 900 Block East Hastings Street across from the Ray-Cam Community Centre. He had just seen a rezoning sign proposing a 6 FSR development along a portion of a street presently populated by one and two level industrial buildings. "I like the idea of housing in this area", he said," but why would a developer or the City even consider 6 FSR in an area like this?" (As an aside, I'm told the density is necessary to support the city demands for additional light industrial space and social housing to be donated by the developer to the City.)

I must say I understood my friends' concerns. Especially since I too have recently been disturbed about the significant increases in height and density for a number of approved and proposed developments scattered around the city. It was not that long ago that 6 FSR was the highest residential density permitted in the city, generally restricted to the Georgia Street Corridor. Recently the City has approved projects at almost three times this density. And now there is a proposal for 6 FSR on East Hastings! If it's acceptable in the 900 Block, is it acceptable for the adjacent ten blocks? 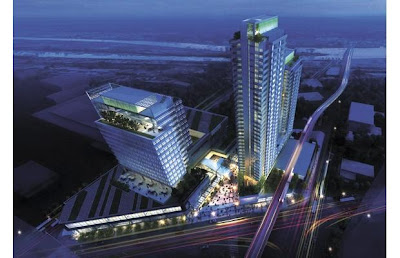 The recently sold-out Marine Gateway development will be more than twice as tall as the Langara Gardens towers at 57th and Cambie, which have always been considered out of scale with that part of the city. (In the interest of full disclosure, I managed the successful rezoning for the fourth rental tower at Langara Gardens in the 80's, arguing at the time that yes, the buildings were out of scale, but does it really matter whether there are three or four towers, noting the need for more rental housing in the area and a resulting FSR of only 1.15.)

The STIR project at 1401 Comox proposed a 7.5 FSR on a site zoned for 1.5. While I support the idea of density bonuses to achieve new rental housing, even new market rental housing, I could not endorse a project at 5 times the permitted FSR, regardless of the merits of the design, talent of the architect, or community spirit and capability of the developer. 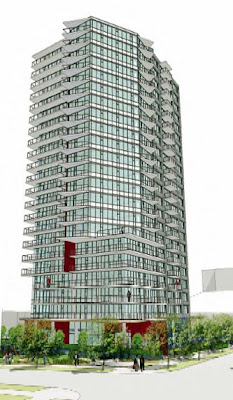 On Main Street, the proposed redevelopment of the Little Mountain property is at an overall 'gross' density that in my opinion is too high for the area. It's higher than what the City approved for the Bayshore development in 1993. The late Jim Green, who worked as a community advocate for the project felt the same way, but argued the higher density was necessary to support the new social housing and other community benefits being expected by the City and community. He also pointed out that the Province was expecting a substantial payment for the land although he always stressed that neither I nor the public knew just how much the developer had offered to pay for the property. This was correct.

In each of these cases, the justification for heights and densities significantly higher than what would have been considered acceptable by architects, planners, and the general public a decade ago include:
Now, I happen to agree that increased amenities are essential if we are to accommodate increased growth. I also agree that 'sustainable development' especially close to transit is a good thing. And as a longstanding advocate for achieving more affordable housing choices through higher densities, I cannot disagree with the third bullet. So what's my problem?

Ironically, what prompted me to write this post was not just those people questioning the Rize, Hasting Street, Comox Street or Little Mountain developments. It was a conversation I had this past week at City Hall with City planners who asked what I thought of allowing higher densities and larger highrise floorplates than have historically been approved in Vancouver.

The floorplate of a building is the area of each floor. For decades the maximum for a highrise building has been around 570 square meters, which has resulted in Vancouver's 'skinny point-block towers' so often admired by visiting architects and planners. This was the size established for Downtown South, most of Coal Harbour and the North Shore of False Creek.

In a typical Vancouver building, approximately 70 square meters of the floorplate is taken up by elevators, stairs, corridors and mechanical shafts. The remaining area can then be divided up into suites. The ratio of the saleable or leasable area to the total building area is referred to as the building efficiency. In Vancouver, the efficiency of most buildings when factoring in the area of enclosed balconies and in-suite storage space is around 85%. This is less than larger buildings found in most other locales. Also, the point-block building form with extensive exterior wall relative to the building area is more expensive to build.

In recent years we have seen some notable exceptions to the smaller floorplate guideline. For example, the Woodwards Tower is much larger. (Fortunately the decorative metal designs that were to be a framework for greenery climbing up the building offset some of the bulk of this building.) The Shangri-la Tower is bigger, but its triangulated shape and overall height help minimize its bulk. Other recently approved buildings such as Telus Garden are also larger.

If you travel outside of Vancouver you can find many much larger, or may I say fatter buildings. eg: the towers in New Westminster above the SkyTrain station just north of Westminster Quay. While providing more affordable housing next to transit and an array of commercial facilities, these buildings are big...very big.

What prompted the question from the City planners is that they are now being asked to approve increasingly larger floor plates in order to improve building efficiency and affordability. The Planning Department is not just looking at fattening the towers; it is also being asked to consider alternative building forms such as larger double loaded slab buildings that are so common around Toronto and other cities. Unlike Vancouver's slender pointblocks, these buildings can easily be twice or three times the floorplate size and much more efficient and cost effective. 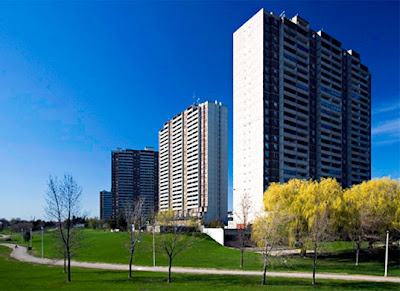 In principle, I support double loader corridor slab buildings up to say ten storeys. However, I don't really want to see the huge slab buildings that one sees driving into downtown Toronto from the airport. 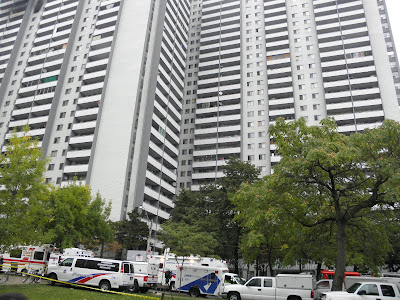 One of the planners responded how ironic it was that I, once considered the developer terrible around City Hall for decades for proposing highrises and various rezonings for higher density four storey apartments along Vancouver arterials, now shared their concerns!

I think the time has come for a full public discussion on just how far Vancouver should deviate from its past practices when it comes to building form and density. Should we forego the slender point blocks? Should we permit Toronto sized slab buildings around the city in the name of affordability ? At what point do we trade off the form, massing and appearance of buildings in order to achieve greater 'sustainability? When is too much density too much?

This is a discussion that needs to take place not just on the pages of the Vancouver Sun and other community newspapers, or at politically charged Public Hearings. These discussions need to occur in the corridors of UDI, the Architectural and Planning Institutes, and our universities.

I hope that people like Gordon Price, Brent Toderian, Larry Beasley, Bob Ransford, Sam Sullivan and others will join into conversations about how much our city should change in the decades to come and what building forms and densities are appropriate in the name of affordability and sustainability. I would also like to see more on-line discussions at Fabula, City Caucus, the Vancouver Observer, The Tyee, and other similar venues.

Looking at plans for some of the new developments in the pipeline, I personally think my friends are right in asking what is going on in our city. I hope this post may help keep the conversation going.
Posted by Michael Geller at 5:26 PM

You mentioned Langara Gardens, which is on the soon to be extremely dense Cambie Street corridor/canyon, do you have an opinion on the towers planned directly in front of the Langara Gardens towers on the Pearson Dogwood Lands?

I now own a business of my own with the help of Elegantloanfirm with a loan of $900,000.00 USD. at 2% rate charges, at first i taught with was all a joke until my loan request was  process under five working days and my requested funds was transfer to me. am now a proud owner of a large business with 15 staffs working under me. All thanks to the loan officer Russ Harry he is a God sent, you can contact them to improve your business on.. email-- Elegantloanfirm@hotmail.com.

Do you need an urgent blank ATM CARD to solve your financial needs and i just want to tell the world my experience with everyone. i discovered a hacking guy called Mike. he is really good at what he is doing, i inquired about the BLANK ATM CARD. if it works or even Exist, then i gave it a try and asked for the card and agreed to their terms and conditions. three days later i received my card and tried it with the closest ATM machine close to me, to my greatest surprise it worked like magic. i was able to withdraw up to $4000. This was unbelievable and the happiest day of my life. there is no ATM MACHINES this BLANK ATM CARD CANNOT penetrate into it because it have been programmed with various tools and software. i just felt this might help those of us in need of financial stability. The card have really change my life. if you want to contact them, HERE is the email: int.hackers002@gmail.com